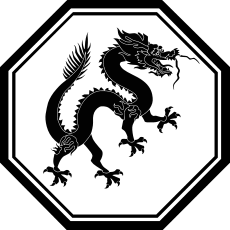 The Dragon (simplified Chinese: 龙; traditional Chinese: 龍) is one of the 12-year cycle of animals which appear in the Chinese zodiac related to the Chinese calendar. The Year of the Dragon is associated with the Earthly Branch symbol 辰.

It has been proposed by one academic researcher that the Chen symbol might actually be a Scorpion and once symbolized the star Antares.[1]

People born within these date ranges can be said to have been born in the "Year of the Dragon", while also bearing the following elemental sign: 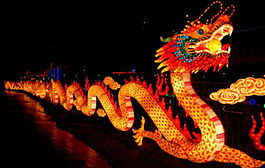 There are typically spikes in the birth rates of countries that use the Chinese zodiac during a Year of the Dragon, because such "Dragon babies" are considered to be lucky and have desirable characteristics.

Compatibility with other zodiac signs[2]

Among all the 12 animal signs, the Monkey has the most tacit understanding with the Dragon people. The cunning Rat can be good partner with the Dragon to make something big. The Dragon people can live happily with the Snake, for the Snake can prevent the Dragon from behaving outrageously. People under the signs of the Tiger, Rooster, Horse, Goat, Rabbit and Pig like to be friends with the Dragon, as they admire the Dragon's beautiful bearing and strength. Also, two Dragons can get along well with each other. However, the relationship between the Dragon and the Ox people are usually tense, because both of them are very majestic. The people that the Dragon feels headaches with the most is the Dog. They feel uncomfortable due to the Dog people's close guard.