From Infogalactic: the planetary knowledge core
Jump to: navigation, search
For the novel by John Christopher, see Dragon Dance (novel).

Dragon dance (simplified Chinese: 舞龙; traditional Chinese: 舞龍; pinyin: wǔ lóng) is a form of traditional dance and performance in Chinese culture. Like the lion dance it is most often seen in festive celebrations. The dance is performed by a team of dancers who manipulate a long flexible figure of a dragon using poles positioned at regular intervals along the length of the dragon. The dance team mimics the supposed movements of this river spirit in a sinuous, undulating manner.

The dragon dance is often performed during Chinese New Year. Chinese dragons are a symbol of China, and they are believed to bring good luck to people, therefore the longer the dragon in the dance, the more luck it will bring to the community.[1] The dragons are believed to possess qualities that include great power, dignity, fertility, wisdom and auspiciousness. The appearance of a dragon is both frightening and bold but it has a benevolent disposition, and so eventually became an emblem to represent imperial authority. The movements in a performance traditionally symbolize historical roles of dragons demonstrating power and dignity.

During the Han Dynasty, different forms of the dragon dance were mentioned. Rain dance performed at times of drought may involve the use of figures of dragon as Chinese dragon was associated with rain in ancient China, for example the dragon Yinglong was considered a rain deity,[2] and the Shenlong had the power to determine how much wind and rain to bring.[3] According to the Han Dynasty text Luxuriant Dew of the Spring and Autumn Annals by Dong Zhongshu, as part of a ritual to appeal for rain, clay figures of the dragons were made and children or adults may then perform a dance. The number of dragons, their length and colour, as well as the performers may vary according to the time of year.[4][5] Other dances involving dragons may be found in a popular form of entertainment during the Han Dynasty, the baixi (百戲) variety shows, where performers called "mime people" (象人) dressed up as various creatures such as beasts, fish and dragons. In his Lyric Essay on Western Capital (西京賦) Zhang Heng recorded various performances such as performers who dressed as a green dragon playing a flute, and a fish-dragon act where fish transformed into a dragon.[6][7][8] These ancient dances however do not resemble modern Dragon Dance in their descriptions, and performances depicted in Han Dynasty stone relief engravings suggest that the props used were cumbersome, unlike modern Dragon Dance where light-weight dragons are manipulated by performers.[9] 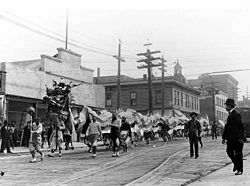 The dragon acts of the Han Dynasty were also mentioned in the Tang and Song Dynasty. Figures similar to the dragon lantern (龍燈) used during Lantern Festival were described in the Song Dynasty work Dreams of Splendor of the Eastern Capital, where figures of dragon mounted for display were constructed out of grass and cloth and inside which numerous candle lights may be placed.[10][11] Such dragon lanterns may be carried and paraded by performers in the street during the Lantern festival at night time,[12] and this may have evolved into the modern form of the dragon dance which is often performed during day time. A wide variety of dragon dances have developed in various regions in China, for example a form of dragon dance from Tongliang County (铜梁龙舞), which originated as snake totem worship, was said to have begun during the Ming Dynasty and became popular in the Qing Dynasty.[13] In the modern era, the government of People's Republic of China adapted and promoted various traditional folk dances,[14] which contributed to the popularity of the current form of the dragon dance now found widely in China as well as Chinese communities around the world. 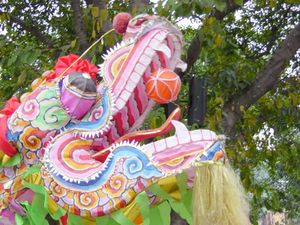 The head of dragon

The dragon is a long serpentine body formed of a number of sections on poles, with a dragon head and a tail. The dragon is assembled by joining the series of hoops on each section and attaching the ornamental head and tail pieces at the ends. Traditionally, dragons were constructed of wood, with bamboo hoops on the inside and covered with a rich fabric, however in the modern era lighter materials such as aluminium and plastics have replaced the wood and heavy material.

Dragons can range in length from around 25 to 35 meters for the more acrobatic models, and up to 50 to 70 meters for the larger parade and ceremonial styles. The size and length of a dragon depend on the human power available, financial power, materials, skills and size of the field. A small organization cannot afford to run a very long dragon because it requires considerable human power, great expenses and special skills which are difficult to manage. 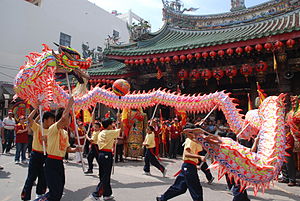 Performers holding the dragons on poles in Taiwan

The normal length and size of the body recommended for the dragon is 112 feet (34 meters) and is divided into 9 major sections. The distance of each minor (rib-like) section is 14 inches apart; therefore, the body has 81 rings. Many may also be up to 15 sections long, and some dragons are as long as 46 sections. Occasionally dragon with far more sections may be constructed in Chinese communities around the world to produce longest dragon possible, since part of the myth of the dragon is that the longer the creature, the more luck it will bring. The current record of the longest dragon stands at over 5 km long.[17]

Historically the dragon dance may be performed in a variety of ways with different types and colors of dragon. Green is sometimes selected as a main color of the dragon, which symbolizes a great harvest. Other colors include: yellow symbolizing the solemn empire, golden or silver colors symbolizing prosperity, red color representing excitement while its scales and tail are mostly beautiful silver colors and glittering at all times which provides a feeling of joyous atmosphere. As the Dragon dance is not performed every day, the cloth of the dragon is to be removed and to have a new touch of ultra-paint before the next performance. 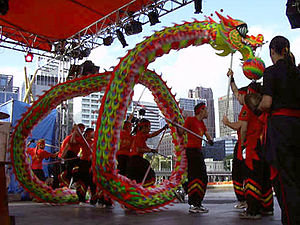 The dragon dance is performed by a skilled team whose job is to bring the motionless body to life. The correct combination and proper timing of the different parts of the dragon are very important to make a successful dance. Any mistakes made by even some of the performers would spoil the whole performance. To be very successful in the dance, the head of the Dragon must be able to coordinate with the body movement to match the timing of the drum. For larger ceremonial and parade style dragons, the head can weigh as much as 12 katis (14.4 kg, almost 32 lb). The dragon tail also has an important role to play as it will have to keep in time with head movements. The fifth section is considered to be the middle portion and the performers must be very alert as the body movements change from time to time. The dragon is often led by a person holding a spherical object representing a pearl. 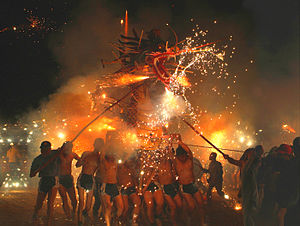 The dragon moves in a wave-like pattern achieved by the co-ordinated swinging of each section in succession. Whilst this swinging constitutes the basic movement of the dragon, executing more complex formations is only limited by a team’s creativity. The patterns and tricks that are performed generally involve running into spiralled formations to make the dragon body turn and twist on itself. This causes performers to jump over or through the dragon’s body sections, adding to the visual display. Other advanced manoeuvres include various corkscrew-like rotating tricks and more acrobatic moves where the performers stand on each other's legs and shoulders to increase the height of the dragon’s movements. 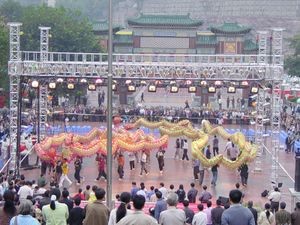 A double dragon dance at Chongqing, China in September 2002 during a week-long celebration of China's National Day

Performing in a dragon dance team incorporates several elements and skills; it is something of a cross-over activity, combining the training and mentality of a sports team with the stagecraft and flair of a performing arts troupe. The basic skills are simple to learn, however to become a competent performer takes dedicated training until movements become second nature and complex formations can be achieved – which rely not only on the skill of the individual member, but on concentration by the team as a whole to move in co-operation.

A double dragon dance, rarely seen in Western exhibitions, involves two troupes of dancers intertwining the dragons. Even rarer are dances with the full array of nine dragons, since nine is a "perfect" number. Such dances involve large number of participants from various organizations, and are often only possible under the auspices of a regional or national government.

A number of dragon dance competitions have been organized around the world. In competition performances however, there are strict rules governing the specifications of the dragon body and the routine performed, and so dragons made for these events and what are mostly seen in the impressive stage shows are made for speed and agility, to be used by the performing team for maximum trick difficulty. In these dragons, the head is smaller and light enough to be whipped around, and must be a minimum of 3 kg, the body pieces are a light aluminium with cane and the majority of the hoops will be very thin PVC tubing. Performances are typically 8- to 10-minute routines with an accompanying percussion set.

In more recent times, luminous dragons whereby the dragons are painted with luminous paints that fluoresce under black light are also used in competition.

Lawrence Ferlinghetti's poem "The Great Chinese Dragon", published in his 1961 anthology Starting from San Francisco was inspired by the dragon dance. Gregory Stephenson says the dragon "… represents 'the force and mystery of life,' the true sight that 'sees the spiritual everywhere translucent in the material world.'"[18] Earl Lovelace's novel "The dragon can't dance" uses the theme of the Carnival dance to explore social change and history in the West Indies.[19]

Arthur Ransome incorporates dragon dances in his children's book Missee Lee. part of the Swallows and Amazons series, which is set in 1930s China.