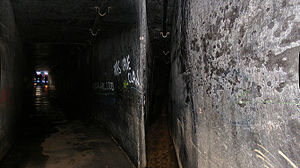 Deep inside a Sydney drain in New South Wales, Australia

Drainage is the natural or artificial removal of surface and sub-surface water from an area. Many agricultural soils need drainage to improve production or to manage water supplies. 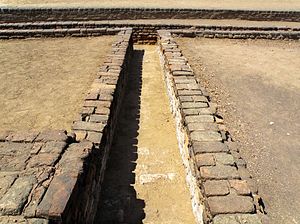 Remains of a drain at Lothal circa 3000 BC

The ancient Indus of sewerage and drainage that were developed and used in cities throughout the civilization were far more advanced than any found in contemporary urban cities in the Middle East and even more efficient than those in some areas of the Indian Subcontinent today. All houses in the major cities of Harappa and Mohenjo-daro had access to water and drainage facilities. Waste water was directed to covered drains, which lined the major streets.[1]

File:Tank Stream.jpg
Tank Stream, a historical drain in the City of Sydney

The invention of hollow-pipe drainage is credited to Sir Hugh Dalrymple, who died in 1753.[2] 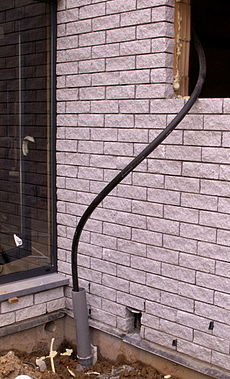 A plastic (PVC) flexible drainage pipe, used to drain water from the roof of a residential house or building

New drainage systems incorporate geotextile filters that retain and prevent fine grains of soil from passing into and clogging the drain. Geotextiles are synthetic textile fabrics specially manufactured for civil and environmental engineering applications. Geotextiles are designed to retain fine soil particles while allowing water to pass through. In a typical drainage system they would be laid along a trench which would then be filled with coarse granular material: gravel, sea shells, stone or rock. The geotextile is then folded over the top of the stone and the trench is then covered by soil. Groundwater seeps through the geotextile and flow within the stone to an outfell. In high groundwater conditions a perforated plastic (PVC or PE) pipe is laid along the base of the drain to increases the volume of water transported in the drain.

Alternatively,the prefabricated plastic drainage system made of HDPE called SmartDitch, often incorporating geotextile, coco fiber or rag filters can be considered. The use of these materials has become increasingly more common due to their ease of use which eliminates the need for transporting and laying stone drainage aggregate which is invariably more expensive than a synthetic drain and concrete liners.

Over the past 30 years geotextile and PVC filters have become the most commonly used soil filter media. They are cheap to produce and easy to lay, with factory controlled properties that ensure long term filtration performance even in fine silty soil conditions.

Seattle's Public Utilities created a pilot program called Street Edge Alternatives (SEA Streets) Project. The project focuses on designing a system "to provide drainage that more closely mimics the natural landscape prior to development than traditional piped systems".[3] The streets are characterized by ditches along the side of the roadway, with plantings designed throughout the area. An emphasis on non curbed sidewalks allows water to flow more freely into the areas of permeable surface on the side of the streets. Because of the plantings the run off water from the urban area does not all directly go into the ground but can also be absorbed into the surrounding environment. According to the monitoring by Seattle Public Utilities, they report a 99 percent reduction of storm water leaving the drainage project[3]

Drainage has undergone a large-scale environmental review in the recent past in the United Kingdom. Sustainable Urban Drainage Systems (SuDS) are designed to encourage contractors to install drainage system that more closely mimic the natural flow of water in nature. Since 2010 local and neighbourhood planning in the UK is required by law to factor SuDS into any development projects that they are responsible for. Drainage manufacturers that are showing a commitment to SuDS in pioneering improved environmental drainage options in the United Kingdom include Alumasc Exterior Building Products, Aco Technologies and Polypipe.

Slot drainage has proved the most breakthrough product of the last twenty years in the as a drainage option. As a channel drainage system it is designed to eliminate the need for further pipework systems to be installed in parallel to the drainage, reducing the environmental impact of production as well as improving water collection. Both stainless steel and concrete channel slot drainage have become industry standards on construction projects.

- Innovation of century Hydroluis drainage pipe system. its solving all problem of clogging in land fit period and after land period. the system is working by water filtration system working by Archimedes law. drainage pipe and his special cover on the top of drainage pipe giving the drainage pipe many advantages. Adventage & Characteristics of Hydroluis® Drainage ; First Anti-Plant roots Drainage pipe On the world. (It does not emit moisture from the pipe holes). Anti-bacterial (Iron Oxide was effecting Iron Ochre, Calcium carbonate and sulfate was effecting bio-film clogging problems on other drain pipe envelope). First drainage pipes saving the underground water in drought seasons. Works only when water table rises above specified levels. Best performance flowing and minimum sediment entrance than all system during land fit period. Eliminates requirement for annual maintenance or internal cleaning of drainage pipe and guarantees the strength life cycle and operational performance of plastic. Showing longer-term operating performance in all types of soil conditions as compared to competing drainage systems. Long term operating costs of the drainage pipe proves to be the most cost-effective. After laying the system, disadvantages of growing plant roots are turned in advantages as this system increases water flow in the direction of drainage pipe. Usable in shallow impermeable grounds,and ropy ground i.e., near the plant roots.

Drainage in the construction industry 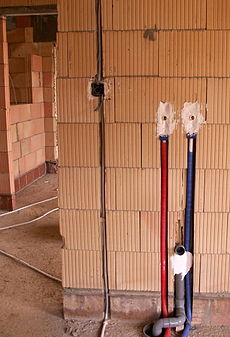 Piping being placed for a sink

The civil engineer is responsible for drainage in construction projects. They set out from the plans all the roads, street gutters, drainage, culverts and sewers involved in construction operations. During the construction process he/she will set out all the necessary levels for each of the previously mentioned factors.

Civil engineers and construction managers work alongside architects and supervisors, planners, quantity surveyors, the general workforce, as well as subcontractors. Typically, most jurisdictions have some body of drainage law to govern to what degree a landowner can alter the drainage from his parcel.

Drainage options for the construction industry include:

The surface opening of channel drainage usually comes in the form of gratings (polymer, plastic, steel or iron) or a single slot (slot drain) that runs along the ground surface (typically manufactured from steel or iron). 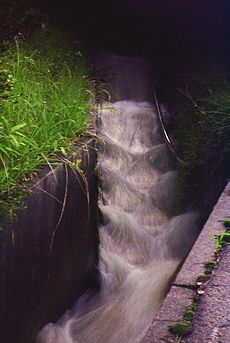 An agricultural drainage channel outside Magome, Japan after a heavy rain. Note that protuberances create turbulent water, preventing sediment from settling in the channel.

Wetland soils may need drainage to be used for agriculture. In the northern United States and Europe, glaciation created numerous small lakes which gradually filled with humus to make marshes. Some of these were drained using open ditches and trenches to make mucklands, which are primarily used for high value crops such as vegetables.

The largest project of this type in the world has been in process for centuries in the Netherlands. The area between Amsterdam, Haarlem and Leiden was, in prehistoric times swampland and small lakes. Turf cutting (Peat mining), subsidence and shoreline erosion gradually caused the formation of one large lake, the Haarlemmermeer, or lake of Haarlem. The invention of wind-powered pumping engines in the 15th century permitted drainage of some of the marginal land, but the final drainage of the lake had to await the design of large, steam powered pumps and agreements between regional authorities. The elimination of the lake occurred between 1849 and 1852, creating thousands of km² of new land.

Coastal plains and river deltas may have seasonally or permanently high water tables and must have drainage improvements if they are to be used for agriculture. An example is the flatwoods citrus-growing region of Florida. After periods of high rainfall, drainage pumps are employed to prevent damage to the citrus groves from overly wet soils. Rice production requires complete control of water, as fields need to be flooded or drained at different stages of the crop cycle. The Netherlands has also led the way in this type of drainage, not only to drain lowland along the shore, but actually pushing back the sea until the original nation has been greatly enlarged.

In moist climates, soils may be adequate for cropping with the exception that they become waterlogged for brief periods each year, from snow melt or from heavy rains. Soils that are predominantly clay will pass water very slowly downward, meanwhile plant roots suffocate because the excessive water around the roots eliminates air movement through the soil.
Other soils may have an impervious layer of mineralized soil, called a hardpan or relatively impervious rock layers may underlie shallow soils. Drainage is especially important in tree fruit production. Soils that are otherwise excellent may be waterlogged for a week of the year, which is sufficient to kill fruit trees and cost the productivity of the land until replacements can be established. In each of these cases appropriate drainage carries off temporary flushes of water to prevent damage to annual or perennial crops.

Drier areas are often farmed by irrigation, and one would not consider drainage necessary. However, irrigation water always contains minerals and salts, which can be concentrated to toxic levels by evapotranspiration. Irrigated land may need periodic flushes with excessive irrigation water and drainage to control soil salinity.