Drayton Rogers Boucher (March 19, 1908 – June 3, 1983)[1] was a Louisiana state legislator from Springhill in northern Webster Parish, Louisiana, affiliated with the Long faction of state Democratic politics. Boucher represented Webster Parish for a single four-year term in the Louisiana House of Representatives from 1936 to 1940.[2] and three terms in the State Senate from a combination district including Webster and Bossier parishes from 1940 to 1952. In the Senate, he succeeded Coleman Lindsey (1892–1968) of Minden, who in 1939 became lieutenant governor upon the succession to the governorship of Earl Kemp Long.[3]

Boucher (pronounced BUTCHER) was born in Springhill to Robert Riley Boucher (born 1880) and the former Lula K. Rogers (1880–1909). The couple married on November 14, 1905. Boucher’s mother died before she was thirty and when he was less than two years of age, and his father subsequently married the former Carrie Cook. Three children, Drayton Boucher’s half-siblings, Gus, Rupert, and Alleane, later married to Floyd Haynes, were born from his father’s second marriage. Robert Boucher’s father and hence Drayton’s grandfather, Augustus C. Boucher (1850–1890), was a native of Harpersville in Shelby County, Alabama. Augustus’s wife, Drayton Boucher’s paternal grandmother, was Jennie B. Cox (1852–1885), a Louisiana native.[citation needed]

Boucher first attended Springhill High School but graduated in 1927 from a three-member class in a one-room school in Asherton in Dimmit County about midway between Laredo and Eagle Pass in south Texas, where Robert Boucher had temporarily relocated the family to become an onion farmer. (Since 1999, Asherton has had no high school; students are bused to the nearby county seat of Carrizo Springs.[4]) Boucher procured a scholarship as salutatorian of the country school and attended Sul Ross State University in Alpine, from which he received in 1932 a bachelor of science degree in biology. He was thereafter a lifelong promoter of his "alma mater" and on occasion visited former professors in Alpine.[5]

After college, Boucher was a United States Army Air Corps cadet for a year at March Field in Riverside, California. From 1934 to 1936, he was a school principal and teacher at a one-room school in Taylor, Arkansas, north of his native Springhill, an experience which prompted him as a future legislature to advocate higher teacher pay. He also sold patent medicine. While placing an advertisement in the newspaper in Minden, forerunner of the Minden Press-Herald, Boucher was urged by the editor to run for the Webster Parish seat in the state legislature in the 1935–1936 election cycle. Days later, the legendary Huey P. Long, Jr., was dead from an assassin’s bullet, and Boucher, at the age of twenty-eight, several months thereafter won the seat. He had visited nearly every home in Webster Parish to achieve his relatively narrow victory[5] over the incumbent E. N. Payne, also of Springhill, 2,778 to 2,474.[6]

In September 1940, freshman Senator Boucher urged newly elected anti-Long Governor Sam Houston Jones to call a special legislative session to repeal many of the “reform” measures passed earlier in the year. The remark was carried in newspapers nationally.[7] In 1946, Boucher proposed in a letter to Governor Jimmie Davis the enactment of a 10 percent amusements tax, including theater tickets, in Louisiana for teacher pay increases, a proposal carried in the motion picture trade magazine Boxoffice.[8]

In 1950, Boucher joined State Representative C.W. Thompson to move through the legislature a $175,000 appropriation to establish a vocational school in Webster Parish, one of the pledges of the 1948 Earl Kemp Long gubernatorial campaign.[11] Now known as Northwest Louisiana Technical College, the institution was first established adjacent to the Griffith Stadium baseball park on Constable Street in Minden. It was relocated in 2013 to a new site off Interstate 20.

Boucher did not seek a fourth term in 1952. He was succeeded in the state senate by John J. Doles, a banker from Plain Dealing in Bossier Parish, who served from 1952 to 1956, during the administration of Governor Robert F. Kennon, also of Minden, but was usually allied with the Long faction. From 1956 to 1960, Boucher was a member of the Louisiana Democratic State Central Committee. He was an alternate delegate to the 1956 Democratic National Convention in Chicago, which nominated Adlai E. Stevenson of Illinois and Estes Kefauver of Tennessee, the first Democratic ticket since 1876 to lose Louisiana's electoral votes to a Republican, Dwight D. Eisenhower.[12] Boucher served on the Louisiana State Mineral Board (1956–1958), the Louisiana Commission on Aging (1958), Louisiana Insurance Rating Board (1959–1960), and the Louisiana Contractors’ Licensing Board (1960–1963).[13]

Boucher was personally and politically close to Governor Earl Long, who sometimes visited in the Boucher home in Springhill. In 1958, Long appointed Boucher to fill the newly established position of director of the state Board of Registration. The title was changed thereafter to “custodian of voting machines”.[13] The duties of elections administration were removed by the legislature at Long’s insistence to a separate department from the office of then anti-Long Secretary of State Wade O. Martin, Jr. After a year, Long replaced Boucher in the position with Douglas Fowler, a powerful local politician in Coushatta, the seat of Red River Parish.[14] Years later, another Louisiana secretary of state, Al Ater of Ferriday in Concordia Parish, reversed the process begun by Boucher and returned the elections duties back to the secretary of state's office after the separate elections department was abolished.

Long named Fowler as the custodian because Boucher did not intend to seek the position in the 1959–1960 election cycle, and Long, who ran for lieutenant governor that year, wanted one of his appointees in the running as the appointed incumbent. Fowler won the post in a Democratic runoff primary and held it until his pending retirement and subsequent death in 1980. In 1976, the name of the position was changed again to the "elections commissioner", now an appointed position.[15]

In the 1959 Democratic primary when Boucher declined to run for voting machine custodian, he was instead an unsuccessful candidate for membership on the Louisiana Democratic State Central Committee from Webster Parish. He was defeated by a 4-3 margin by the dairyman, Roy Don Hinton, Sr. (1912-2011), of Minden.[16]

On exiting politics, Boucher remained in Baton Rouge and attended Louisiana State University Law Center though he never procured legal credentials. Instead, he concentrated on Drayton Boucher Real Estate and his Evelyn Corporation. He was also a partner in Acadian Oil and Gas in Lafayette. Boucher was an active member of the Masonic lodge. As a Shriner, he was active in fundraising for the Shriners Hospital for Children in Shreveport. He was an active member of the Jefferson Baptist Church in Baton Rouge.[13] 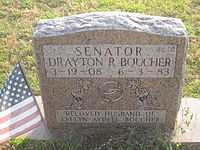 Boucher died after a lengthy illness from colon cancer at the age of seventy-five.[13] In addition to his second wife and son, Boucher was survived by a sister and brother, both in the insurance business, Alleane Haynes O’Neal, since deceased, of Springhill and Gus M. Boucher (1917–2001) of Shreveport, later Mansfield,[1] There was also a granddaughter, Jenelle Boucher (born 1977) of Shongaloo, Louisiana. A second brother, Rupert Boucher of Bossier City and later Baton Rouge, preceded him in death. Services were first held at the Jefferson Baptist Church; a second service under the direction of Bailey Mortuary was held in Springhill, with interment at Springhill Cemetery.[13]

Boucher was a cousin of Jesse L. Boucher (1911–2004), an insurance agent who served as mayor of Springhill from 1958 to 1962. Jesse Boucher was the father of three daughters, including actresses Sherry Boucher (born 1945), now a Bossier Parish real estate agent once married to the late George Peppard, and Savannah Smith Boucher, who is also a producer. Gary Boucher is hence a third cousin of the two actresses. Through an aunt, Stella Boucher Jones (1872–1946), Drayton Boucher was a first cousin of Herman "Wimpy" Jones of Minden and Bossier City, who from 1956 to 1960 held the same Bossier-Webster Senate seat that Boucher had earlier represented.[18]