Catharine Drew Gilpin Faust (born September 18, 1947)[1] is an American historian, college administrator and the President of Harvard University.[2] Faust is the first woman to serve as Harvard's president and the university's 28th president overall. Faust is the fifth woman to serve as president of an Ivy League university and is the former dean of the Radcliffe Institute for Advanced Study. Faust is Harvard's first president since 1672 without an undergraduate or graduate degree from Harvard, and the first to have been brought up in the South.[3][4] In 2014, she was ranked as the 33rd most powerful woman in the world by Forbes.[5]

She was born Catharine Drew Gilpin in New York City and raised in Clarke County, Virginia, in the Shenandoah Valley.[1] She is the daughter of Catharine Ginna (née Mellick) and McGhee Tyson Gilpin; her father was a Princeton graduate and breeder of thoroughbred horses.[1][6] Her paternal great-grandfather, Lawrence Tyson, was a U.S. Senator from Tennessee during the 1920s.[7] Faust also has New England ancestry and is a descendant of the Puritan divine Rev. Jonathan Edwards, the third president of Princeton.[6]

She graduated from Concord Academy, Concord, Massachusetts, in 1964. She earned her BA from Bryn Mawr College in 1968. She graduated magna cum laude with honors in history. She attended the University of Pennsylvania for graduate work, earning her MA in 1971 and her Ph.D. in American Civilization in 1975 with a dissertation entitled A Sacred Circle: The Social Role of the Intellectual in the Old South, 1840–1860.[8] In the same year, she joined the University of Pennsylvania faculty as assistant professor of American civilization. Based on her research and teaching, she rose to Walter Annenberg Professor of History. A specialist in the history of the South in the antebellum period and Civil War, Faust developed new perspectives in intellectual history of the antebellum South and in the changing roles of women during the Civil War.

She is the author of six books, including Mothers of Invention: Women of the Slaveholding South in the American Civil War (1996), for which she won both the Society of American Historians Francis Parkman Prize and the Avery O. Craven Award from the Organization of American Historians in 1997. Her works include James Henry Hammond and Old South, a biography of James Henry Hammond, Governor of South Carolina from 1842–1844. Faust’s most recent book, This Republic of Suffering (2008), was a critically acclaimed exploration of how the United States' understanding of death was shaped by the high losses during the Civil War. It was a finalist for the Pulitzer Prize and National Book Award (see awards below).

In 2001, Faust was appointed as the first dean of the Radcliffe Institute for Advanced Study, established after the merger of Radcliffe College with Harvard University.[1]

On February 8, 2007, The Harvard Crimson reported that Faust had been selected as the next president of the university.[9] Following formal approval by the university's governing boards, her appointment was made official three days later.[10]

Her appointment followed the departure of Lawrence H. Summers, who resigned on June 30, 2006, after a series of controversial statements that led to mounting criticism from members of Harvard's Faculty of Arts and Sciences. Derek Bok, who had served as President of Harvard from 1971–1991, returned to serve as an interim president during the 2006–2007 academic year. 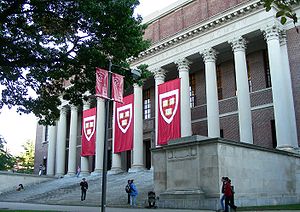 Preparations for inauguration of Faust

During a press conference on campus Faust said, "I hope that my own appointment can be one symbol of an opening of opportunities that would have been inconceivable even a generation ago." She also added, "I'm not the woman president of Harvard, I'm the president of Harvard."[3]

A university is not about results in the next quarter; it is not even about who a student has become by graduation. It is about learning that molds a lifetime, learning that transmits the heritage of millennia; learning that shapes the future.[11]

One of Faust's first initiatives was significantly increasing financial aid offered to students at Harvard College. On December 10, 2007, Faust announced a transformative new policy for middle-class and upper-middle-class students, which limited parental contributions to 10 percent for families making between $100,000 and $180,000 annually, and replaced loans with grants. In announcing the policy, Faust said, “Education is the engine that makes American democracy work.... And it has to work and that means people have to have access.”[12] The new policy expanded on earlier programs that eliminated contributions for families earning less than $60,000 a year and greatly reduced costs for families earning less than $100,000. Similar policies were subsequently adopted by Stanford, Yale, and many other private U.S. universities and colleges.[13]

In addition to promoting accessibility to higher education, Faust has testified before the U.S. Congress to promote increased funding for scientific research and support of junior faculty researchers.[14] She has made it a priority to revitalize the arts at Harvard and integrate them into the daily life of students and staff.[15] Faust has worked to further internationalize the University. In addition, she has been a strong advocate for sustainability and has set an ambitious goal of reducing the University’s greenhouse gas emissions by 2016, including those associated with prospective growth, by 30 percent below Harvard’s 2006 baseline.[16]

In May 2008, Christina Romer, an economics professor at the University of California, Berkeley, was not offered tenure at Harvard despite support from the members of the Harvard Economics Department. Because of the confidential nature of the process, which at Harvard includes a panel consisting of outside experts and internal faculty members from outside the department, Faust has declined to discuss press reports related to Romer’s tenure case.[17] Romer was later nominated by President Barack Obama to chair the Council of Economic Advisers.

In the wake of a series of layoffs in June 2009, Faust was criticized for refusing to accept a pay cut in an effort to save jobs. In the months preceding the layoffs, various campus groups called upon Faust and other administrators to reduce their salaries as a means of cutting costs campus-wide.[18] Reports on Faust's salary differ: The Boston Globe reports that Faust made $775,043 in the 2007–2008 school year,[19] while the Harvard Crimson reported that Faust made $693,739 in salary and benefits for the 2008–2009 fiscal year.[20] In early 2009, the Harvard Corporation approved salary freezes for the president, deans, senior officers, management staff, and faculty, and offered an early retirement program. The University also undertook an involuntary reduction in staff of 2.4 percent of its employees.[21]

In December 2010, Faust and President John L. Hennessy of Stanford University co-wrote an editorial in support of passage of the DREAM Act. The legislation was not passed by the 111th United States Congress.[22]

On 12 May 2014, Faust responded to a Harvard student's club decision to re-enact a Satanic "black mass," writing:[24]

The reenactment of a 'black mass' planned by a student group affiliated with the Harvard Extension School challenges us to reconcile the dedication to free expression at the heart of a university with our commitment to foster a community based on civility and mutual understanding. Vigorous and open discussion and debate are essential to the pursuit of knowledge, and we must uphold these values even in the face of controversy. Freedom of expression, as Justice Holmes famously said long ago, protects not only free thought for those who agree with us but freedom for the thought that we hate.

But even as we permit expression of the widest range of ideas, we must also take responsibility for debating and challenging expression with which we profoundly disagree. The 'black mass' had its historical origins as a means of denigrating the Catholic Church; it mocks a deeply sacred event in Catholicism, and is highly offensive to many in the Church and beyond. The decision by a student club to sponsor an enactment of this ritual is abhorrent; it represents a fundamental affront to the values of inclusion, belonging and mutual respect that must define our community. It is deeply regrettable that the organizers of this event, well aware of the offense they are causing so many others, have chosen to proceed with a form of expression that is so flagrantly disrespectful and inflammatory.

Nevertheless, consistent with the University’s commitment to free expression, including expression that may deeply offend us, the decision to proceed is and will remain theirs. At the same time, we will vigorously protect the right of others to respond—and to address offensive expression with expression of their own.

I plan to attend a Eucharistic Holy Hour and Benediction at St. Paul's Church on our campus on Monday evening in order to join others in reaffirming our respect for the Catholic faith at Harvard and to demonstrate that the most powerful response to offensive speech is not censorship, but reasoned discourse and robust dissent.

Faust is married to Charles E. Rosenberg, a historian of medicine at Harvard. They have a daughter, Jessica Rosenberg, who is a Harvard graduate and works for the New Yorker. Faust also has a step daughter, Leah Rosenberg.[25]

She was previously married to Stephen Faust.[26]

Her first cousin is the movie and television actor Jack Gilpin.[26]

Faust was diagnosed with breast cancer in 1988 and treated that year. She has enjoyed good health since then. She has declined to speak with the media with more details about her diagnosis or treatment.[27]