A Driving Van Trailer (DVT) is a purpose-built railway vehicle that allows the driver to operate a locomotive at the opposite end of a train. Trains operating with a DVT therefore do not require the locomotive to be moved around to the other end of the train at terminal stations. Unlike many other control cars, DVTs resemble locomotives (specifically Class 91) and thus when the train is operating in "push" mode it does not appear to be travelling backwards. The vehicles have no passenger accommodation due to rules in place at the time of building that prohibited passengers in the leading vehicles of trains that travel at more than 100 miles per hour (160 km/h). 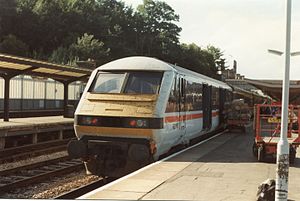 The direct InterCity from Shrewsbury to London Euston with a DVT and mailbags delivering the Royal Mail at a time when British Rail ran the network.

On the InterCity 225 (IC225) sets operating on the East Coast Main Line (ECML) the Mark 4 DVTs and locomotives operate in push-pull formation utilising a time-division multiplexer to send control signals along specially screened cables which run the length of the train. The locomotives usually face away from London, only being changed occasionally in rare circumstances.

On the original Mark 3 DVTs, which operated on the West Coast Main Line (WCML), the intention was to use the RCH jumpers to carry the signals therefore allowing the same cables to be used for lighting and the public address system, as well as driver-guard signalling. However this proved to be very troublesome in service and eventually the rakes of coaches on the WCML were re-wired with specially screened cables exclusively for the TDM system. 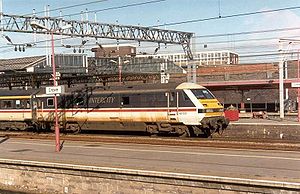 In addition to the driver's cab, some DVTs have luggage and cycle storage space and a guard's office.

The DVT concept is similar to the Mark 2 DBSO but unlike its predecessor, which was rebuilt from existing stock, it was a new build vehicle manufactured specifically for this purpose. The first design of DVT is designed to match Mark 2 D, E & F and Mark 3 coaches. The second design has a narrower profile, similar to Mark 4 coaches, which will enable it to be converted to tilting operation if required in the future.

Abellio Greater Anglia operate push-pull services between London Liverpool Street and Norwich in conjunction with Class 90 locomotives. These DVTs were originally used by Virgin Trains until the Pendolinos were fully operational. All the WCML DVTs needed refurbishing when they came off lease and were re-painted into 'one' colours.

DB Schenker (Formerly known as EWS) operate a Mark 3 DVT as part of their DB Schenker Company Train. 82146 is painted in the Silver colours of the company train and operates with Class 67 67029 and three Mark 3 coaches.

Wrexham & Shropshire started operating push-pull services with DVTs in October 2008 between Wrexham General and London Marylebone in conjunction with Class 67 diesel locomotives following the start of the service on 28 April 2008. The DVTs required modification to work with the Class 67, involving adding a notched power controller as is used in the locomotive and a 27 wire jumper cable as used on the GM EMD locomotives which is known as the AAR Multiple Working system. These DVTs were originally used by Virgin Trains until the Pendolinos were fully operational.

Although these services did start operation in April 2008, no DVTs were initially used due to delays in the refurbishment of the units. Up to mid October WSMR trains used two Class 67 Locomotives - one at either end of the train. On 11 October 2008 the first DVT entered traffic on a WSMR service.

Following the closure of Wrexham & Shropshire these vehicles transferred to sister company Chiltern Railways and started operating on Birmingham to London Marylebone services. They are currently being further modified to work with the power doors that Chiltern are fitting to the Mk3 coaches and to have a generator fitted to enable Electric Train Supply and compressed air to be provided to the coaches when the Class 67 locomotive is not running, such as when in terminus stations and when stabled.

As a result of the modification to work with the Class 67s, the WSMR DVTs have been renumbered 82/3 series although they do retain the ability to work with TDM fitted electric locomotives.

In early 2013, several former Virgin Trains DVTs, including 82129 and 82145 have been acquired by Network Rail and modified to work with diesel locomotives for use on Network Rail test trains. Part of the modification work includes the integration of a diesel generator to provide power for on-board systems.

In early 2013, the ownership of former Virgin Trains spare DVT 82101 passed to Direct Rail Services, to be modified to test AAR multiple working with the new Class 68 locomotives. 82101 was chosen as it already had OTMR fitted from its time as Virgin's spare DVT.

Virgin Trains used to operate push-pull services on WCML between London Euston, Liverpool Lime Street, Manchester, Birmingham and Glasgow in conjunction with Class 86, Class 87 and Class 90 locomotives, but latterly the services went on to be run exclusively by Class 390 Pendolinos. Virgin retained two DVTs for backup purposes (82101 and 82126). Both DVTs have been fitted with on-train monitoring recorders (OTMR). As of July 2009[update], 82126 had been repainted into a Pendolino silver/black livery, in order to bring it in line with the newer trains (hence its nickname 'pretendolino'). In November 2014 the "Pretendolino" was transferred to Norwich Crown Point depot to enter service with Abellio Greater Anglia having come to the end of its agreed lease to Virgin Trains. 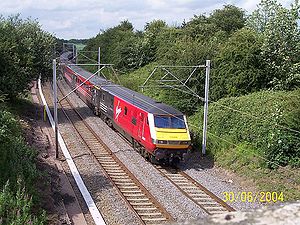 Mark 4 DVTs were built in 1988 by Metro Cammell at their Washwood Heath plant in Birmingham and were introduced to the ECML with the IC225 rakes of Mark 4 coaches. They operate with class 91 locomotives using the TDM system via UIC screened cables through the nine Mark 4 coaches of the rake.

Initially operated by British Rail's InterCity sector in its familiar livery, following privatisation of the railways the services were taken over by Sea Containers under the Great North Eastern Railway (GNER) brand but following a change of operator to National Express East Coast in December 2007 the vehicles were rebranded with NXEC logos and a white stripe whilst retaining the overall GNER blue colour scheme . However, the NXEC franchise had collapsed in November 2009 meaning that the original plan to repaint all the DVT's in NXEC colours were cancelled. The Government operated East Coast took over the franchise and as a result the East Coast logos had replaced the NXEC Logos on the white stripe. In 2010, a silver/grey livery was introduced and this was eventually repainted on all the Mark 4 DVT's by 2013. When Virgin Trains East Coast took over the franchise in March 2015, two of the DVT's were repainted in the Virgin livery whilst most other units temporarily received a Virgin Logo. By November 2015 all Mark 4 DVT's will be repainted in the Virgin Livery.

The Mark 5 DVT was to be part of British Rail's ill-fated InterCity 250 project on the West Coast Main Line. This would have resembled the Class 93 locomotive, but contain a driving cab, restaurant and bicycle storage area.

DVTs have been involved in very few accidents.