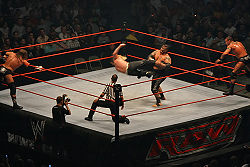 A dropkick is an attacking maneuver in professional wrestling. It is defined as an attack where the wrestler jumps up and kicks the opponent with the soles of both feet; this sees the wrestler twist as he or she jumps so that when the feet connect with the opponent one foot is raised higher than the other (depending on which way he or she twists) and the wrestler falls back to the mat on his or her side, or front.[1] This is commonly employed by light and nimble wrestlers who can take advantage of their agility, and is often executed on a charging opponent, or while charging at an opponent.

The most basic form of a dropkick, but potentially the hardest to pull off, is a standing dropkick first used by "Jumping Joe" Savoldi where the wrestler catches a standing or running opponent with a standard dropkick from a standing position. In order to be pulled off effectively, it requires great leg strength in order to gain elevation.

The dropkick as we know it today was originated [2] by "Jumping Joe" Savoldi, although wrestler Abe Coleman, known as "Hebrew Hercules" and "Jewish Tarzan" can be seen in earlier video using a feet-first dive at an opponent's waist. Coleman, listed at 5'2" tall, claimed the move was inspired by kangaroos he saw on a tour of Australia in 1930.[3]

The wrestler runs and slides feet first at the opponent, kicking them with both feet, like a baseball player sliding into a base. It is usually performed by a wrestler in the ring sliding to kick the upper torso or head of a wrestler standing outside and beside the ring. A variation involves sliding to kick the head of an opponent hung upside-down from the turnbuckles.

In defensive terms, a baseball slide can be used to counter an Irish whip, as the whipped wrestler slides before they hit the ropes. It can also be used to slide under an opponent, usually as a technique to avoid an attempted kick.

Also known as a backflip dropkick, a dropsault is an attack where the wrestler jumps up and kicks the opponent with both feet and then executes a backflip, landing on the mat chest-first. Sometimes this move can see the wrestler land chest-first on another opponent. Many wrestlers perform this move with great care, as any slight twist in their body can injure them.

A front dropkick, or flying dropkick, is an attack where the wrestler jumps up and kicks forward so that they hit the opponent with the soles of both feet, without twisting like a normal dropkick, this enables the wrestler to fall backwards to the mat, landing on their upper back and shoulder area.[4] This is often used to attack lower parts of the opponent than the normal dropkick. This move is also used when an opponent is sitting or kneeling on the ground so that the feet will connect with the opponent's head.

This variant sees wrestler setting up in front of a bent over opponent, or running to the ropes and apply the traditional dropkick in a side or front position.

Also known as a diving dropkick, a missile dropkick is an attack where the wrestler jumps off the top turnbuckle and executes the dropkick on a standing opponent.

In the variant, the attacking wrestler first places an opponent so they are sat on the mat in one of the corners of ring before then ascending to the top rope/second rope of the corner at the opposite end of the ring ropes. From here the wrestler leaps the length or width of the ring, and performs a front dropkick to the opponent. Often a wrestler performing this maneuver will place a chair or other foreign object in front of the opponent's head (wedging the chair between the middle and bottom ropes so it won't move), which will be driven into the face or head upon impact. This move was innovated by Rob Van Dam.

In this dropkick an attacking wrestler runs towards an opponent and jumps up sideways striking an opponent's head or chin with the sole of their highest foot, with similar execution as a big boot. A front dropkick variation, in which the attacking wrestler doesn't twist like in a normal dropkick, is also possible.

This is a springboard version of the missile dropkick. The most common springboard dropkick involves the attacker springing off the adjacent ropes before connecting with the dropkick.

In this variation the wrestler executes a front flip while running or standing. He extends both his legs simultaneously as in a front dropkick and hits his opponent in the head or chest. An avalanche or springboard version is also possible.

In this variation the wrestler executes a traditional dropkick but twisting his/her body while applying it in a standing position.