Dropull (Albanian: Dropulli; Greek: Δρόπολις, Dropolis) is a municipality and a predominantly Greek-inhabited region in Gjirokastër County, in southern Albania. The region stretches from south of the city of Gjirokastër to the Greek–Albanian border, along the Drinos river. The region's villages are part of the Greek "minority zone" recognized by the Albanian government, in which live majorities of ethnic Greeks.[1] The municipality Dropull was created in 2015 by the merger of the present municipalities Dropull i Poshtëm, Dropull i Sipërm and Pogon. The seat of the municipality is the village Sofratikë.[2] The total population is 3,503 (2011 census), in a total area of 448.25 km2.[3]

During the Middle Helladic period (2100-1550 BC), a double tumulus was excavated, in Vodhinë, with strong similarities to the grave circles at Mycenae, showing a common ancestral link with the Myceneans of southern Greece.[4] In classical antiquity, the area was inhabited by the Greek tribe of the Chaonians.

From the Roman period there was a fortified settlement named Hadrianopolis in the region, named after the Roman emperor Hadrian. The settlement was built on a strategic spot in the valley of the river Drinos near the modern village of Sofratika, 11 kilometers south of Gjirokastër. During the 6th century the Byzantine emperor Justinian I, as part of his fortification plans against barbarian invasions, moved the settlement 4 kilometers southeast in the modern village of Peshkëpi, in order to gain a more secure position. The city is also referred in Byzantine sources as Ioustinianoupolis. Today, ruins of the fortifications are still visible, as are the aqueduct and a medieval Orthodox Christian church.[5]

During the 11th century the city was named Dryinoupolis, a name possibly deriving from its former name or from the nearby river. It was also, from the 5th century, the see of a bishopric (initially part of the Diocese of Nicopolis, Naupactus and then Ioannina).

The bishopric of Dryinoupolis included the region of modern southwest Albania and from the 16th century its center was Gjirokastër.[6] At the end of the 19th century, many inhabitants migrated to the United States.[7] 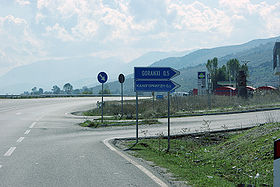 Bilingual roadsign, in Albanian and Greek.

Some of the villages of the region are: