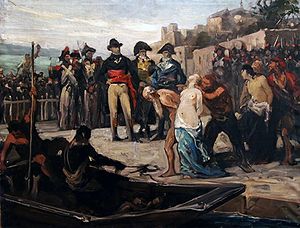 The Drownings at Nantes (French: Noyades de Nantes) were a series of mass executions by drowning during the Reign of Terror in Nantes, France, that occurred between November 1793 and February 1794. During this period, anyone arrested and jailed for not consistently supporting the Revolution, or suspected of being a royalist sympathizer, especially Catholic priests and nuns, was cast into the Loire and drowned on the orders of Jean-Baptiste Carrier, the representative-on-mission in Nantes. Before the murders ceased, as many as four thousand or more people, including innocent families with women and children, lost their lives in what Carrier himself called "the national bathtub."[1]

Catholic clergy and émigrés had been victims of angry pro-republican violence and forced deportations by sans-culottes since the Decree of 17 November 1791 went into force. However, it was the Law of Suspects (French: Loi des suspects) approved by the National Convention of the French First Republic on 17 September 1793 that swept the nation with "revolutionary paranoia".[2] This decree defined a broad range of conduct as suspicious in the vaguest terms, and did not give individuals any means of redress.

Nantes, in particular, was besieged by the tragedies of the French civil war in the Vendée at its doorstep. Threats of epidemics and starvation were always present. Battles, skirmishes, and police actions led to the incarceration of more than ten thousand prisoners of war within its confines, and simply feeding them became enormous burden for the city's residents. To control the situation, the leaders of the National Convention put Jean-Baptiste Carrier, a native of the Auvergne region, in charge of obtaining food supplies for Republican soldiers in Nantes. He soon became responsible for furnishing provisions to the entire local population, as well as for maintaining order and putting down suspected royalist revolts.

Fear that contagious diseases, particularly typhus, would spread from prisoners to the general population reached levels of panic in the autumn of 1793. Heavy losses of inmates' lives recorded by military personnel, physicians, nurses, and even judges, shocked civic leaders and pushed them to try anything to stop the further spread of illness. Ultimately, they chose to empty the jails in the city center and to place the inmates at the Coffee Warehouse jail at the port and on vessels moored in the harbor.

The first drownings targeted 160 Catholic priests, called 'refractory clergy' (French: clergé réfractaire). They were first arrested and held at Saint-Clément Convent, then, in the summer of 1793, at the Carmelite Mission, which had been converted into prisons. On 5 July, they were sent to Chantenay immediately west of Nantes, and held on the barge La Thérèse where they suffered miserably from the sun and high temperatures. Between 19 July and 6 August, most of the priests were transferred to the friary of the Petits Capucins and the Hermitage, which also were prisons, that proved more bearable. But on 25 October, the Revolutionary Committee of Nantes ordered the priests back to the docks to be held on the barge La Gloire.

On the night of 16 November 1793 (26 Brumaire Year II of the French Republic) Adjutant-General Guillaume Lamberty and Fouquet ordered a barge that had been specially customized by carpenters to the docks. They directed O'Sullivan, a master of arms, and his men, to transfer the prisoners and to execute the first 90 priests by drowning. Nearly all died as planned, however, three of them were rescued by sailors on the warship L'Imposant, who gave them spirits and warm blankets. Captain Lafloury was ordered to hand them back to civil authorities in Nantes. After being returned to jail, the three perished with the second group of priests who were drowned the next night. A single soul survived this massacre, named Father Landeau. An excellent swimmer, he managed to escape during a struggle, jumped from the boat into the Loire, and swam to safety.[3]

A gunner named Wailly, who served on the boat La Samaritain on the nights of November 16 to 17, left the only first-person account on the first drowning. He described meeting Lamberty and Fouquet, later, hearing the desperate screaming of the drowning men, rousing his fellow comrades who heard the same cries, and the silence that came after they had been swallowed by the Loire.[3]

The second mass drowning of priests was also led by Guillaume Lamberty. Several men in his guard led by Marat Foucauld systematically stripped 58 clergymen who had been transported from Angers. The priests were then led to a specially equipped barge and taken far from the port of Nantes to the mouth of the river where they were submerged. This time, no one survived.

On the evening of 4 December 1793 (14 Frimaire, Year II), Jean-Baptiste Carrier, key members of the Revolutionary Committee of Nantes, François-Louis Phélippes Tronjolly and colleagues, Julien Minée for the department, Renard for the city, and representatives of the fr:Société populaire de Nantes, all met. In the course of heated discussions, they appointed a jury to name so-called "criminals." The next day, the jury presented more than three hundred names on a list, which became orders for execution. To carry out the judgements, Carrier imagined a radical process he euphemistically called "vertical deportation": rather than deporting criminals to remote penal colony islands, he proposed loading the condemned onto flat bottom boats, and drowning them by casting them out in the middle of the Loire at Chantenay, an adjacent village. The executions were to be carried out at night, in secrecy, however there was concern among members of the committee that corpses would begin floating-up to the surface, sometimes days later. These concerns proved to be justified.

Two groups received the task of conducting the executions: Guillaume Lamberty and his men, and the Marat Company of Revolutionary Guards, known as the 'American Hussars' (French: hussards américains) due to the presence of former Black slaves and settlers from Saint-Domingue in its ranks.

The third drowning, known as the Bouffay Drownings, are perhaps better known than the previous two events. This execution took the lives of 129 prisoners on the nights of 14 & 15 December 1793 (24 & 25 Frimaire, Year II). Led by Jean-Jacques Goullin and Michel Moreau-Grandmaison, the Marat Company went to Bouffay Prison, most of them drunk. Unable or unwilling to consult their lists, the soldiers went at random, grabbing prisoners from their cells, stripped them of their belongings and money, then, tied them into pairs to heavy rocks. Once loaded onto a flat boat, the guards sailed the anguished men only a short distance downstream and cast them off little further than Trentemoult, a fishing village directly opposite Nantes, near the island of Cheviré.

The drownings of 23 December 1793 (3 Nivôse, Year II) were recorded by three different accounts, with the accuracy of least two stories verified and confirmed. This time, Pierre Robin, Fouquet, and their accomplices forced approximately eight hundred captured 'royalist sympathizers' of all ages and sexes onto two boats, which only sailed as far as Chantenay and drowned them.

Among the most humiliating drownings were what was termed the 'underwater marriages'. It is a matter of dispute what constituted an 'underwater marriage' or if they happened as described, but unverified accounts tell of a priest and a nun, stripped naked, then tied together before they were drowned. These drownings were also called 'republican baptisms' or 'republican marriages.'[1]

The next executions, from 29 December 1793 (9 Nivôse, Year II) to 18 January 1794 (29 Nivôse, Year II), were known as the Galiot Drownings (French: Noyades des galiotes). Two-masted Dutch galiots – small trade ships – moored in Nantes as a result of a naval blockade, were moved on this occasion to the quay next to the Coffee Warehouse jail where the condemned could easily board. Whether the galiots made two, three, or more drowning 'expeditions' is unknown, however, the lives of two hundred to three hundred victims – men, women and children – were lost on each sailing. At least one boat was intentionally sunk in the Loire loaded with victims in the hold and the hatches sealed.[4]

Records indicate that the last drownings using these Dutch vessels were organized by Carrier himself, who completely emptied out the Coffee Warehouse jail of all prisoners. These executions were perpetrated on the nights of 29 & 30 January 1794 (10 & 11 Pluviôse, Year II) and involved about four hundred people. 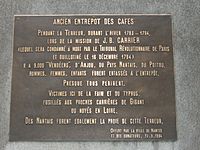 Translation of a historical marker: "Former Coffee Warehouse Jail. During the Terror in the winter of 1793–1794, at the time of the mission of J.-B. Carrier (who was condemned to death by the Revolutionary Tribunal in Paris and guillotined on 16 December 1794), 8 to 9,000 citizens of the Vendée, Anjou, the Nantes region, and Poitou – men, women, and children – were encarcerated at this jail. Nearly all perished. Victims of starvation and typhus, shot near Gigant quarry or drowned in the Loire. – The people of Nantes were equal prey to the Terror."

The final mass drownings took place on 27 February 1794 (9 Ventôse, Year II). According to official documents read to the National Convention in Paris on 12 October 1794 (21 Vendémiaire, Year III), these drownings were ordered by Adjutant General Lefèbvre resulting in 41 deaths: one 78-year-old blind man and another man, 12 women, 12 girls, and 15 children, including 10 who were only 6 to 10 years old and 5 infants. This execution took place in Bourgneuf Bay.

The precise number of victims is not known. According to Roger Dupuy, there were between 7 and 11 drowning executions, with 300 to 400 victims each time.[5] According to Jacques Hussenet, 1,800 to 4,800 people drowned on the orders of Carrier, and perhaps 2,000 others drowned on the orders by other Republican revolutionaries in Nantes.[6] Jean-Clément Martin wrote that between 1,800 and 4,000 people died in mass drownings.[7] In 1879, Alfred Lallie reported that 4,860 people were drowned[3] confirmed by Hippolyte Taine.[8] According to Reynald Secher, 4,800 victims suffered execution by drowning just during the autumn of 1793.[9] For Gaston Martin, about 1800 died, for Fouquet 9000 died, for Mellinet 3500 were killed.[10]

According to historian Reynald Secher, these murders are one component of a systematic policy of extermination (genocide) of the residents of the Vendée planned by the revolutionary Committee of Public Safety, and approved by a vote of the National Convention in Paris on 1 October 1793.[11]

Although the most heinous crimes committed by Jean-Baptiste Carrier are his direction of the mass drownings at Nantes, he also was responsible for the executions by firing squads of 1,800 to 2,600 victims at a quarry in Gigant, near Nantes, and collaborated on other criminal and repressive acts that he justified by the Law of Suspects. His extreme paranoia was no more apparent than in the Affair of 132 Nantes Moderates (French: Affaire des 132 modérés nantais), a "tragicomedy of justice" that involved the round-up of more than 132 men[12] from all walks of life vaguely accused of politically moderate 'federalism', who were imprisoned, tried in Paris, and subsequently acquitted of all charges.

Carrier was recalled to Paris in early 1794 to participate in the trial of Robespierre. At first, the Thermidorians left Carrier in peace, but members of the Revolutionary Committee of Nantes soon covered him with insults and accusations. Based on overwhelming evidence, he was arrested in Paris on 3 September 1794 and indicted 27 November. At his trial, he clumsily and sarcastically stated that he knew nothing about what he was accused. However, he was immediately denounced by those closest to him and charged with the drownings, executions, butchering of women and children, thefts, acts of greed, as well as exacerbating the strife that Nantes suffered. A unanimous vote called for Carrier's execution, and he was guillotined on 16 December 1794.[13][14]