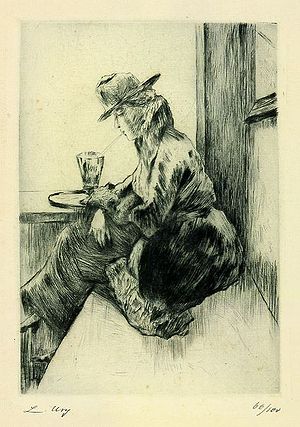 Drypoint is a printmaking technique of the intaglio family, in which an image is incised into a plate (or "matrix") with a hard-pointed "needle" of sharp metal or diamond point. Traditionally the plate was copper, but now acetate, zinc, or plexiglas are also commonly used. Like etching, drypoint is easier for an artist trained in drawing to master than engraving, as the technique of using the needle is closer to using a pencil than the engraver's burin.

The lines produced by printing a drypoint are formed by the burr thrown up at the edge of the incised lines, in addition to the depressions formed in the surface of the plate. A larger burr, formed by a steep angle of the tool, will hold a lot of ink, producing a characteristically soft, dense line that differentiates drypoint from other intaglio methods such as etching or engraving which produce a smooth, hard-edged line. The size or characteristics of the burr usually depend not on how much pressure is applied, but on the angle of the needle. A perpendicular angle will leave little to no burr, while the smaller the angle gets to either side, the larger the burr pileup. The deepest drypoint lines leave enough burr on either side of them that they prevent the paper from pushing down into the center of the stroke, creating a feathery black line with a fine, white center. A lighter line may have no burr at all, creating a very fine line in the final print by holding very little ink. This technique is different from engraving, in which the incisions are made by removing metal to form depressions in the plate surface which hold ink, although the two methods can easily be combined, as Rembrandt often did. Because the pressure of printing quickly destroys the burr, drypoint is useful only for comparatively small editions; as few as ten or twenty impressions with burr can be made, and after the burr has gone, the comparatively shallow lines will wear out relatively quickly. Most impressions of Rembrandt prints on which drypoint was used show no burr, and often the drypoint lines are very weak, leaving the etched portions still strong. To counter this and allow for longer print runs, electroplating (called steelfacing by printmakers) can harden the surface of a plate and allow the same edition size as produced by etchings and engravings. 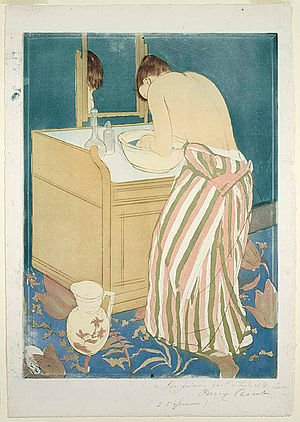 The technique appears to have been invented by the Housebook Master, a south German 15th-century artist, all of whose prints are in drypoint only. Among the most famous artists of the old master print Albrecht Dürer produced 3 drypoints before abandoning the technique; Rembrandt used it frequently, but usually in conjunction with etching and engraving. As intaglio techniques, they can all be used on the same plate. Alex Katz used this process to create several of his famous works, such as "Sunny" and "The Swimmer".

In the 20th century many artists produced drypoints, including Max Beckmann, Milton Avery, and Hermann-Paul. By adding aquatint work on the plate and inking with various colours, artists such as Mary Cassatt have produced colour drypoints. Canadian artist David Brown Milne is credited as the first to produce coloured drypoints by the use of multiple plates, one for each colour.[1]

Any sharp object can theoretically be used to make a drypoint, as long as it can be used to carve lines into metal. Dentistry tools, nails, and metal files can all be used to produce drypoints. However, certain types of needles are created specifically for drypoints:

Printing is essentially the same as for the other intaglio techniques, but extra care is taken to preserve the burr. After the image is finished, or at least ready to proof, the artist applies ink to the plate with a dauber. Too much pressure will flatten the burrs and ruin the image. Once the plate is completely covered with a thin layer, a tarlatan cloth is used to wipe away excess ink, and paper (typically pages from old phone books) may be used for a final wipe of the lightest areas of the image. Some printmakers will use their bare hand instead to wipe these areas. Once the desired amount of ink is removed, the plate is run through an etching press along with a piece of dampened paper to produce a print.

Drypoint wiping techniques vary slightly from other intaglio techniques. Less pressure is applied to achieve desirable lines, because the burrs forming the image are more fragile than etched or engraved lines, but also because the ink rests on the plate surface, instead of pressed down into indentations. Also, because of the characteristics of the way the burrs catch ink, the direction of the wiping matters. Ink tends to pile up in the lee of the burr during the application of the ink and wiping with the tarlatan, so if the printer wipes in the direction of the lines with his hand, he may remove most of the ink, leaving a light gray line. However, if he wipes perpendicularly to the line, he can actually increase the pile of ink on the other side of the line, darkening the printed line.