DuBois /ˈduːbɔɪz/ DOO-boys is a city in Clearfield County, Pennsylvania, United States, 100 miles (160 km) northeast of Pittsburgh. The population was 7,794 at the 2010 census.[1] It is the principal city in the DuBois, PA Micropolitan Statistical Area. DuBois is also one of two principal cities, the other being State College, that make up the larger State College-DuBois, PA Combined Statistical Area.

The town was founded by John Rumbarger, for whom the town was originally named. The Rumbarger Cemetery is all that survives of this original settlement. The town was later renamed for local lumber magnate John DuBois,[2] who came from a longstanding American family of French Huguenot descent. In 1938, his nephew, John E. DuBois, donated the family mansion and estate as a permanent home for the DuBois Campus of Penn State University.[3] While DuBois was founded as a lumber town, the mining of bituminous coal quickly became the chief industry in DuBois.

Over the years there have been numerous unsuccessful attempts to combine the city with the surrounding Sandy Township. Combined, the population of DuBois and Sandy Township is approximately 18,000 people.

The Commercial Hotel, since demolished, was listed on the National Register of Historic Places in 1985, and the DuBois Historic District was listed in 1997.[4] 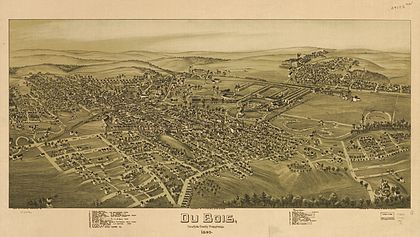 The city is located just south of Interstate 80 with exits at mile markers 97 and 101. DuBois is located on U.S. Route 219, which connects with Buffalo, New York, to the north and Johnstown, Pennsylvania, to the south. The city is located 3 miles (5 km) north of U.S. Route 322, which locally connects the city with Reynoldsville west bound and Clearfield east bound and to Atlantic City, New Jersey to the east and Cleveland, Ohio to the west. U.S. Route 119 begins as Blinker Parkway just south of the city. It connects the city with Punxsutawney and eventually leads to southwestern Pennsylvania and West Virginia. Pennsylvania Route 255 begins in the northern part of the city and follows East DuBois Avenue, then becoming the Bee-Line highway, connecting to the city of St. Marys, becoming the Million Dollar Highway.

Fullington Trailways operates a bus terminal via Fullington Auto Bus Company with a station located on Rockton Road just past the intersection of Maple Avenue and Shaffer Road. It is part of the Trailways Transportation System which interlines with other carriers that includes Greyhound. DuBois is a hub for Fullington Trailways; all of its routes to Harrisburg, State College, Scranton–Wilkes-Barre, Pittsburgh, and Buffalo run through DuBois.[13]

Local businesses are diverse; producing paper, lumber, food products, concrete, utility meters, machinery, and equipment, which are shipped to customers around the world via the area's extensive transportation infrastructure.[14]

The DuBois Mall is a regional retail center serving the Tri-County area with national stores including Old Navy, Sears and JC Penney.[15]

The DuBois Micropolitan area is served by The Courier-Express, a Monday-Friday evening daily newspaper with a circulation of approximately 10,000 homes and businesses. It covers the DuBois area of Clearfield County and most of Jefferson County, plus the southern half of Elk County in depth, reaching up into Johnsonburg and southern McKean and Forest counties. It was established in 1944 when the Daily Courier (founded as the Weekly Courier in 1879) and the Daily Express (founded as the Express in 1883) consolidated to become The Courier-Express.[18]

Tri-County Sunday is printed on Sundays with a circulation of approximately 16,000. It covers the area of The Courier-Express, plus quite a bit of circulation in Cameron, southern McKean, Clarion and Forest counties.

Alternatively, high school students may choose to attend Jefferson County Dubois Area Vocational-Technical School in Reynoldsville for training in the construction and mechanical trades, the culinary arts and allied health careers. The Riverview Intermediate Unit IU6 provides the District with a wide variety of services like specialized education for disabled students and hearing, speech and visual disability services and professional development for staff and faculty.

Private schools in DuBois include:

Cook Forest is the most important tract of virgin timberland to be found in Pennsylvania and is a 35-mile drive from DuBois. Major Israel McCreight of DuBois was an early advocate, promoter, and steward of the 8,500-acre (3,400 ha) Cook Forest State Park, the first Pennsylvania State Park acquired to preserve a natural landmark. Cook Forest features 27 marked trails totaling some 29 miles for hiking. The terrain is of rolling hills and cool valley streams. Special scenic areas are the old growth forest, Fire Tower/Seneca Point and the Clarion River. Among Cook Forest's primary attractions is the "Forest Cathedral" area of old growth white pine and hemlock, some trees of which top 180 feet. About 5,000 acres are open to hunting, trapping, and the training of dogs during established seasons. Common game species are deer, wild turkey, bear, and squirrel. The Clarion River flows along the park border and provides fishing for trout, warm-water game fish and panfish. Many visitors enjoy canoeing or kayaking down the river.

Theater and the arts

DuBois is building a strong reputation for local entertainment and the arts in the tri-county area. DuBois is the hometown of educational entertainment specialist Gene Allen, known for his character education programs for schools and libraries.[24]

More traditional arts can be found at the Winkler Gallery of Fine Arts, founded by local artist Perry Winkler. The Winkler Gallery of Fine Arts opened its doors in December 2003 as a co-op for local artists to display and sell their work to the public. The gallery hosts the annual DuBois Arts Festival. Along with supporting the local artist community, the gallery provides art education for the residents of the DuBois area through artist workshops in several mediums such as stained glass, silk painting, and watercolors.[25]

There seems to be some debate as to exactly when Frank Hahne came to DuBois and broke ground on his own facility. One source claims 1898, another 1897. It seems most likely that this occurred between April and the end of 1896. It was on April 16, 1896, that the DuBois Weekly Courier reported: "Some new developments in connection with the brewery may be looked for in the near future."

There were a number of reasons Hahne chose the DuBois site for his facility, but the most frequently cited was the excellence of the water supply. He purchased 2,300 acres (9.3 km2) surrounding the local reservoir to protect the watershed from pollution.

By 1906, the brewery had four products on the market: DuBois Wurzburger, Hahne's Export Pilsener, DuBois Porter, and DuBois Budweiser. The Budweiser name would be at the center of controversy for 60 years between DuBois Brewing and Anheuser-Busch.

The DuBois brands soon traveled far and wide for a brewery of its size, ranging up to 150 miles (240 km) away and selling well in Buffalo, Erie and Pittsburgh. The brewery's 300-barrel kettle was kept busy churning out brands, while the left-over grain materials were pressed and sold for cattle feed and grist mills in the rural areas surrounding DuBois.

As with many other American breweries, DuBois Brewing moved right along until 1918 and the advent of Prohibition. The brewery shifted production to "near beer" and soft drinks and opened the H&G Ice Company. According to the April 7, 1933, DuBois Courier, the brewery won the honor of being one of only two breweries in the entire nation that had never violated or been suspected of violating the Prohibition laws since the 18th Amendment went into effect. As a result, DuBois Brewing Company was issued license number G-2, allowing them to resume brewing immediately upon the enaction of the 21st Amendment.

Frank Hahne died in 1932, and the brewery was passed to his only son, Frank Hahne Jr., whose own only son died in infancy, leaving the family without an heir. Hahne Jr. sold the brewery to Pittsburgh Brewing in 1967.