The Dragon Boat Festival, also often known as the Tuen Ng or Duanwu Festival, is a traditional and statutory holiday originating in China.

The festival now occurs on the 5th day of the 5th month of the traditional lunar calendar, the source of its alternative name, the Double Fifth Festival.[5] The Chinese calendar is lunisolar, so the date varies from year to year on the Gregorian calendar. In 2012, it fell on June 23; in 2013, on June 12; and in 2014, it occurred on June 2. The focus of most celebrations involves eating zongzi (sticky rice treats wrapped in bamboo leaves), drinking realgar wine (雄黃酒, xiónghuángjiǔ), and racing dragon boats.

The sun is considered to be at its strongest around the time of summer solstice, as the daylight in the northern hemisphere is the longest. The sun, like the Chinese dragon, traditionally represents masculine energy, whereas the moon, like the phoenix, traditionally represents feminine energy. The summer solstice is considered the annual peak of male energy while the winter solstice, the longest night of the year, represents the annual peak of feminine energy. The masculine image of the dragon was thus naturally associated with Duanwu .[6]

The official Chinese name of the festival is 端午节 on the mainland[7] and 端午節 on Taiwan,[8] Hong Kong, Singapore[4] and Macao.[9] This is pronounced variously in different Chinese dialects. In Mandarin, it is romanized as Duānwǔjié on the mainland and Taiwan; in Cantonese, it is romanized as Tuen1 Ng5 Jit3 on Hong Kong and Tung1 Ng5 Jit3 on Macao. All of these names (lit. "Opening the Seventh") refer to its original position as the first seventh-day (午日, Wǔrì) in the fifth month (五月, Wǔyuè) of the traditional Chinese calendar, which was also known as 午 (Wǔ). Both the People's Republic and the Republic of China use "Dragon Boat Festival" as the official English translation of the holiday,[1][2] while Hong Kong calls it the "Tuen Ng Festival"[4] and Macao calls it "Dragon Boat Festival (Tun Ng)" in English[3] and Festividade do Barco-Dragão (Tung Ng) in Portuguese.[10]

Among Malaysian, Singaporean, and Taiwanese Hokkien speakers, the festival is also known as the "Fifth Month Festival," the "Fifth Day Festival," and the "Dumpling Festival."

In Indonesian, the festival is known as "Peh Cun", which is derived from the Hokkien phrase 扒船 (Hokkien POJ: pê-tsûn; Hanyu Pinyin: bā chuán). 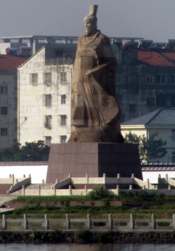 A statue of Qu Yuan in Jingzhou, at the site of the former Chu capital Ying.
Main article: Qu Yuan

The story best known in modern China holds that the festival commemorates the death of the poet and minister Qu Yuan (c. 340–278 BC) of the ancient state of Chu during the Warring States period of the Zhou Dynasty.[11] A cadet member of the Chu royal house, Qu served in high offices. However, when the king decided to ally with the increasingly powerful state of Qin, Qu was banished for opposing the alliance and even accused of treason.[11] During his exile, Qu Yuan wrote a great deal of poetry. Twenty-eight years later, Qin captured Ying, the Chu capital. In despair, Qu Yuan committed suicide by drowning himself in the Miluo River.

Despite the modern popularity of the Qu Yuan origin theory, in the former territory of the state of Wu, the festival commemorated Wu Zixu (died 484 BC). Wu Zixu was a loyal advisor whose advice was ignored by the king to the detriment of the kingdom. Wu Zixu was forced to commit suicide by the king Fuchai, with his body thrown into the river on the fifth day of the fifth month. After his death, in places such as Suzhou, Wu Zixu is remembered during the Duanwu Festival to this day. 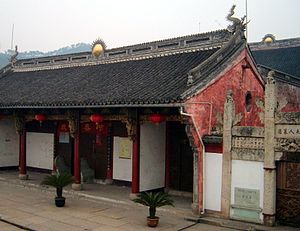 The front of the Cao E Temple, facing east, toward Cao'e River, in Shangyu, Zhejiang, China.

Although Wu Zixu is commemorated in southeast Jiangsu and Qu Yuan elsewhere in China, much of Northeastern Zhejiang including the cities of Shaoxing, Ningbo and Zhoushan celebrates the memory of the young girl Cao E (曹娥, AD 130–143) instead. Cao E's father Cao Xu (曹盱) was a shaman who presided over local ceremonies at Shangyu. In 143, while presiding over a ceremony commemorating Wu Zixu during the Duanwu Festival, Cao Xu accidentally fell into the Shun River. Cao E, in an act of filial piety, decided to find her father in the river, searching for three days trying to find him. After five days, she and her father were both found dead in the river from drowning. Eight years later, in 151, a temple was built in Shangyu dedicated to the memory of Cao E and her sacrifice for filial piety. The Shun River was renamed Cao'e River in her honour.

Modern research suggests that the stories of Qu Yuan or Wu Zixu were superimposed onto a pre-existing holiday tradition. The promotion of these stories might be encouraged by Confucian scholars, seeking to legitimize and strengthen their influence in China.

The stories of both Qu Yuan and Wu Zixu were recorded in Sima Qian's Shiji, completed 187 and 393 years after the events, respectively because historians gave high praise to both characters.

Another theory, advanced by Wen Yiduo, is that the Dragon Boat Festival had its origins in dragon worship. Support is drawn from two key traditions of the festival: the tradition of dragon boat racing and zongzi. The food may have originally represented an offering to the dragon king, while dragon boat racing naturally reflects reverence of the dragon and the active yang energy associated with it. This combines with the tradition of visiting friends and family on boats.

Another suggestion is that the festival celebrates a widespread feature of east Asian agrarian societies: the harvest of winter wheat. Offerings were regularly made to deities and spirits at such times: in the ancient Yue, dragon kings; in the ancient Chu, Qu Yuan; in the ancient Wu, Wu Zixu (as a river god); in ancient Korea, mountain gods (see Dano). As interactions between different regions increased, these similar festivals eventually merged into one holiday. 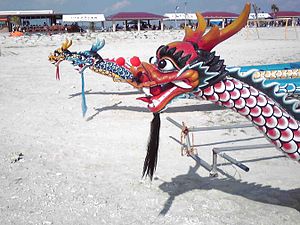 The festival was long marked as a festival culturally in China and is a public holiday in Hong Kong, Taiwan and Macau. However, the People's Republic of China government, established in 1949, did not officially recognize Duanwu as a public holiday. Beginning in 2005, the government began to plan for the re-recognition of three traditional holidays, including Duanwu.[12] Since 2008, Duanwu has been celebrated not only as a festival but also a public holiday in the People's Republic of China.[13] It is unofficially observed by the Chinese communities of southeast Asia, including Singapore and Malaysia. Equivalent and related official festivals include Children's Day in Japan, Dano in Korea, and Tết Đoan Ngọ in Vietnam. In Japan's Okinawa Prefecture, they continue to have a tradition of dragonboat races known as hari (ハーリー, haarii). In the capital city of Naha, the Naha Hari (那覇ハーリー, Naha Haarii) is performed as part of the national observance of Children's Day, but in Itoman the Itoman Hare (糸満ハーレー, Itoman Haaree) is celebrated the same day as the Duwanwu Festival on the Chinese lunar calendar. The city of Tomigusuku also has its own Tomigusuku Hari (豊見城ハーリー), but it is performed in late July. 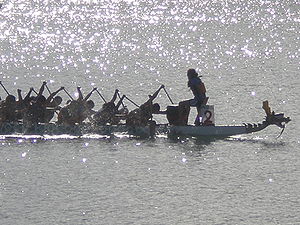 Three of the most widespread activities for Duanwu Festival are eating (and preparing) zongzi, drinking realgar wine, and racing dragon boats.[14]

Other common activities include hanging up icons of Zhong Kui (a mythic guardian figure), hanging mugwort and calamus, taking long walks, and wearing perfumed medicine bags. Other traditional activities include a game of making an egg stand at noon (this "game" is one that if you make the egg stand at exactly 12:00 noon, you will have luck for the next year), and writing spells. All of these activities, together with the drinking of realgar wine, were regarded by the ancients as effective in preventing disease or evil and promoting health and well-being.

In the early years of the Republic of China, Duanwu was celebrated as "Poets' Day" due to Qu Yuan's status as China's first known poet. The Taiwanese also sometimes conflate the spring practice of egg-balancing with Duanwu.[15]