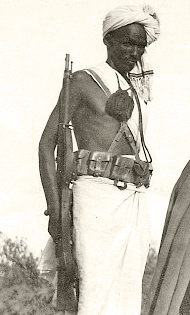 Dubat with rifle, futa and lanyard in Eritrea during the Second Italo-Abyssinian War.

Dubats (English: White turbans) was the designation given to armed irregular bands employed by the Italian "Royal Corps of Colonial Troops" (Regio Corpo di Truppe Coloniali in Italian) in Italian Somaliland from 1924 to 1941. The word dubats was derived from a Somali phrase meaning "white turbans".

Dubats were local soldiers from Italian Somaliland that were employed in Italian military service.[1] First raised in July 1924 by Colonel Camillo Bechis, they mainly served as light infantry and developed a reputation as effective fighters.[2] Dubats were maintained as permanent units and were better trained and armed than the tribal banda, employed as auxiliaries when needed by the Italian authorities in Somalia and other colonies. 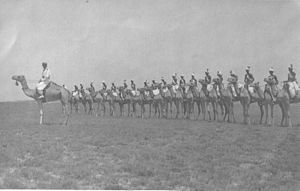 Dubats were concentrated along the British Somaliland, Ethiopia and East Africa Protectorate frontiers.

From their establishment, Dubats wore the white futa, a traditional Somali sarong-like garment.[3] They also wrapped smaller futa or turbans (dub) around their heads, which were assiduously maintained.[4] The term dubat (literally "white turban") ultimately derives from this usage.[2] The Somali non-commissioned officers were distinguished by green, red or black lanyards and tassels, according to rank. During 1935-36, a khaki version of this attire, including a saharianna tunic, was adopted for service wear.[5]

Commissioned officers of the Dubats were all Italian. They were usually seconded from the six regular Arab-Somali battalions of the Royal Corps of Colonial Troops, recruited in the territories of present-day Somalia and Yemen.[6]

During 1925-27, three thousand Dubats saw service in the Campaign of the Sultanates, involving the occupation of the autonomous regions of Obbia, where the Sultan Yusuf Ali Kenadid ruled over his Sultanate of Hobyo, and Migiurtinia (1923–27), where Boqor Osman Mahamud ruled the Sultanate. During late 1927, Dubats were used to raid across the border into Ethiopia, where clan militiamen from Migiurtinia had regrouped in Gorrahei. The use of Dubat irregulars for these intrusions enabled the Italians to avoid diplomatic complications with Ethiopia.[7]

The four original bands were increased to ten during the early stages of the Italian invasion of Ethiopia in 1935. On 5 December 1934, a clash occurred between a detachment of Dubats occupying the Walwal oasis in the Ogaden, and Ethiopian troops escorting a border commission. This incident provided the pretext for the subsequent Second Italian-Abyssinian War. Nearly 20,000 Dubats and other irregulars served with the Italian forces during the 1936 conquest of Ethiopia.[8]

With the occupation of Ethiopia, the Dubats were re-deployed in the Ogaden Desert and along the frontiers of French and British Somaliland. They saw ongoing action against Ethiopian guerrillas in Hararghe.

On the eve of Italy's entry into World War II, the Dubats underwent reorganisation, becoming more closely integrated with the regular Somali units of the Royal Corps of Colonial Troops. The 1st Dubat Group subsequently served as part of General De Simone's Column during the successful Italian invasion of British Somaliland in August 1940. Dubats participated in the attack on the British colony of Kenya and the conquest of Moyale.[9]

During the East African Campaign of 1941, the Dubats served with the Pietro Gazzera army group.[2] Following the British military occupation of Italian Somaliland in 1941, the Dubats were disbanded.

One Gold Medal of Military Valor:

With the courage of their race - fueled by love for the flag and the belief in the higher destinies of Italy in Africa, gave during the war, many proofs of the most brilliant heroism. With great generosity, and similar faithfulness, gave their blood for the consecration of the Italian Empire. Italo-Ethiopian War, October 3, 1935 - May 5, 1936. - November 19, 1936.[10]