Dublin City Council (Irish: Comhairle Cathrach Bhaile Átha Cliath) is the authority responsible for local government in the city of Dublin in Ireland. As a city council, it is governed by the Local Government Act 2001. Until 2001, the council was known as "Dublin Corporation". The council is responsible for housing and community, roads and transportation, urban planning and development, amenity and culture and environment. The council has 63 elected members and is the largest local council in Ireland. Elections are held every five years and are by single transferable vote. The head of the council has the honorific title of Lord Mayor. The city administration is headed by a Chief Executive, Owen Keegan. The council meets at City Hall, Dublin.

As part of the Dublin Region, Dublin City Council is within the geographic remit of the Dublin Regional Authority. Following the enactment of the Local Government Act 2001, the Regional Authority was established.[1] It is one of eight such Authorities in the Republic of Ireland. Local government in the region was further regulated by the Local Government Act 1994. This provided for the legal establishment of the following local government administrative areas: Fingal, South Dublin and Dún Laoghaire–Rathdown and also recognised the extant Dublin Corporation area, vesting its powers in a renamed entity – Dublin City Council. The statutory instrument giving effect to the Act came into force on 1 January 1994.[2] The instrument also provided for the abolition of Dublin County Council – the entity that had previously had responsibility for Dún Laoghaire–Rathdown, Fingal and South Dublin. The four entities collectively comprise the former entity known as County Dublin. This entity, which had been created after the Norman invasion of Ireland, was abolished under the Acts.

The functions of the City Council include: Public Housing, Library Services, Refuse Services, Drainage, Driver and Vehicle Licensing, Planning and Roads. The Council budgeted to spend €847,137,522 during 2007 in service of these functions. 50.5% of this went towards the payroll of the Council's staff which was a reduction from 50.7% in 2006. In the case of Traffic Management, the Council receives grants from the Department of Environment, Heritage and Local Government and also the National Roads Authority to assist it in meeting this responsibility. The 2007 roads budget was just over €105,000,000, to support maintenance of all roads in its functional area.

File:Dublin City in Ireland.svg
The area governed by the council

Prior to 1841, the administrative and governmental system of Dublin, known as Dublin Corporation, was bicameral having an assembly of called the "House of Aldermen" and another called the "House of Sheriffs and Commons". Under the Municipal Corporations (Ireland) Act 1840, they were replaced by a unicameral assembly. The new name Dublin City Council was coined for the unicameral assembly. The Lord Mayor of Dublin presided over the assembly. This office which had existed since 1665. The first City Council was elected in October 1841 when Daniel O'Connell became the first Lord Mayor. Since 1 January 2002, the functions of local government have been transferred to Dublin City Council.[3] In 1994, Dublin County Council and the Corporation of Dún Laoghaire were abolished[4] but this had no impact on the city council. To coincide with its name change, the City Council adopted a new logo and brand identity, based on a simplified version of the ancient "three castles" symbol.

Executive power is shared between the council and an appointed executive official known as the Chief Executive. The chief executive is responsible for a staff of 6,200. The offices of the chief executive and other administrative staff are based in the Civic Offices on Wood Quay. The Lord Mayor of Dublin acts as chair of the Council is the ceremonial head of the city government.

Representative power is vested in the city assembly which consists of 63 members. Members are elected using Proportional representation using the Single transferable vote, every five years from Dublin City Council local electoral areas. The City Council meets in plenary session on the first Monday of every month in Dublin City Hall. One of the Council's most important roles is that of passing an annual budget. Should any Irish council fail to pass a budget within the allotted time, the Minister for the Environment is empowered to abolish it and grant its powers to a commissioner until the next scheduled council elections.

The council has 63 seats. For the purpose of elections the city is divided into nine local electoral areas (LEA).[5] 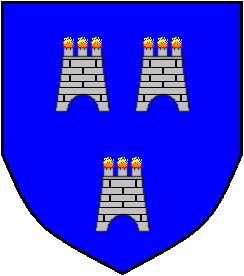 This list reflects the order in which councillors were elected on 23 May 2014.[6]

Dublin City Council must by law at least once in every ten years, following consultation with the returning officer for Dáil elections in respect of each constituency within its area, establish a polling district containing a polling place. This is call the Polling Scheme which lists each constituency with its Local electoral areas, polling districts and polling places.

Council meetings take place in the headquarters at Dublin City Hall. Formerly Royal Exchange, the City Hall is one of Dublin's finest buildings and located on Dame Street. It was built in 1769–79 to the winning design of Thomas Cooley. In an architectural competition, James Gandon was the runner-up with a scheme that many people favoured. The building was taken over for city government use in the 1850s.

Much of the council's administrative staff are based in the Civic Offices on Wood Quay. These offices were built in 1979–80 on top of what had been one of the best preserved Viking sites in the world. The Corporation's (as it was then) decision to bulldoze the historic site proved one of the most controversial in modern Irish history, with thousands of people, including medieval historian Fr. F. X. Martin and Senator Mary Robinson (later President of Ireland) marching to try to stop the destruction. The destruction of the site on Wood Quay and the building of a set of offices known as The Bunkers (being a prime example of Brutalist architecture) is generally seen as one of the most disastrous acts against Ireland's heritage since independence, with even Dublin Corporation admitting subsequently that it was ashamed of its action. Originally, there were to be four of these 'bunkers' built but only two were ever completed. Instead the river frontage is a block designed by the firm Scott Tallon Walker. Completed in 1994, it boasts a leafy atrium and fine views from many of its offices.