Duchy of Courland and Semigallia

From Infogalactic: the planetary knowledge core
Jump to: navigation, search
This article is about the 16th-18th century duchy. For the short-lived state founded after World War I, see Duchy of Courland and Semigallia (1918).

The Duchy of Courland and Semigallia (Latin: Ducatus Curlandiæ et Semigalliæ, Polish: Księstwo Kurlandii i Semigalii, German: Herzogtum Kurland und Semgallen, Latvian: Kurzemes un Zemgales hercogiste) is the name of a duchy in the Baltic region that existed from 1561 to 1569 as a vassal state of the Grand Duchy of Lithuania and from 1569 to 1726 the Polish-Lithuanian Commonwealth, incorporated into Polish-Lithuanian Commonwealth by Sejm in 1726,[1] but on 28 March 1795, it was annexed by the Russian Empire in the Third Partition of Poland.

The name was also given to a short-lived wartime state existing from 8 March to 22 September 1918. Plans for it to become part of the United Baltic Duchy, subject to the German Empire, were thwarted by Germany's surrender of the Baltic region at the end of the First World War. The area became a part of Latvia at the end of World War I; see Duchy of Courland and Semigallia (1918).

File:Kurland Karte.jpg
German map of Duchy of Courland and Semigallia (about 1600)

In 1561, during the Livonian Wars, the Livonian Confederation was dismembered and the Livonian Brothers of the Sword, an order of German knights, was disbanded. On the basis of the Treaty of Vilnius, the southern part of Estonia and the northern part of Latvia were ceded to the Grand Duchy of Lithuania and formed into the Ducatus Ultradunensis (Pārdaugavas hercogiste). The part of Latvia between the west bank of the Daugava River and the Baltic Sea became the Duchy of Courland and Semigallia, nominally a vassal state of the King of Poland.

Gotthard Kettler, the last Master of the Order of Livonia, became the first duke of Courland. Other members of the Order became the Couronian nobility, with the fiefdoms they had hitherto held becoming their estates. In all, Kettler received nearly one-third of the land in the new duchy. Mitau (Jelgava) was designated as the new capital and a Diet was to meet there twice a year.

Several parts of the Courish area did not belong to the Duchy. The Order of Livonia had already loaned the Grobiņa district (on the coast of Baltic Sea) to the Duke of Prussia. Another district, the Bishopric of Piltene, also called the "Bishopric of Courland" (on the Venta River in western Courland), belonged to Magnus, son of the king of Denmark. He promised to transfer it to the Duchy of Courland after his death, but this plan failed and only later did Wilhelm Kettler regain this district.

Like the other members of the Order, Kettler was German and set about establishing the Duchy along the lines of similar German states. In 1570, he issued the Privilegnum Gotthardinum, which allowed the landholders to enserf the native peasantry on their lands.[2]

When Gotthard Kettler died in 1587, his sons, Friedrich and Wilhelm, became the dukes of Courland. They divided the Duchy into two parts in 1596. Friedrich controlled the eastern part, Semigalia (Zemgale), with his residence in Mitau (Jelgava). Wilhelm owned the western part, Courland (Kurzeme), with his residence in Goldingen (Kuldīga). Wilhelm regained the Grobiņa district when he married the daughter of the Duke of Prussia. He also paid out and regained control over the Piltene district, but eventually it fell to the Polish-Lithuanian Commonwealth. Here he developed metalworking, shipyards, and the new ships delivered the goods of Courland to other countries.

However, relations between the duke and the landowners were quite hostile. In addition, the Commonwealth, the overlord of the Duchy of Courland, supported the landowners. Wilhelm expressed his disappointment with the landowners, but this ended with his removal from the duke's seat in 1616. Finally, Wilhelm left Courland and spent the rest of his life abroad. Thus, Friedrich became the only duke of Courland after 1616.

From 1600 to 1629, the Polish-Lithuanian Commonwealth and Sweden conducted a war with its main battlefields around Riga. As the result, Sweden gained control of central and northern Latvia, which became Swedish Livonia. The Commonwealth retained the eastern part of the Duchy of Livonia, thereafter called Inflanty Voivodeship in Polish. Courland was also involved in this war, but did not suffer severe damage.

Under the next duke, Jacob Kettler, the Duchy reached the peak of its prosperity. During his travels in Western Europe, Jacob became the eager proponent of mercantilist ideas. Metalworking and ship building became much more developed, and powder mills began producing gunpowder. Trading relations developed not only with nearby countries, but also with Britain, France, the Netherlands and Portugal. Jacob established the merchant fleet of the Duchy of Courland, with its main harbours in Ventspils and Libau.

In 1651 the Duchy established its first colony in Africa, St. Andrews Island at the Gambia River and founded Jacob Fort there. The main export goods included ivory, gold, furs and spices. Soon afterwards, in 1652, Courlanders established another colony, in Tobago in the West Indies. There the main export goods included sugar, tobacco, coffee and spices.

However, during this time, the Duchy of Courland remained an object of interest for both Sweden and the Polish-Lithuanian Commonwealth. In 1655 the Swedish army entered the territory of the Duchy and the Swedish–Polish war (1655–60) had begun. The Swedish army captured Duke Jacob (1658–60). During this period, the Dutch took over both of Courland's colonies, and the merchant fleet and factories suffered destruction. This war ended with the peace Treaty of Oliwa (1660). Courland regained Tobago on the basis of the treaty and held it until 1689. Duke Jacob set about restoring the fleet and factories, but the Duchy of Courland never again reached its pre-war level of prosperity. 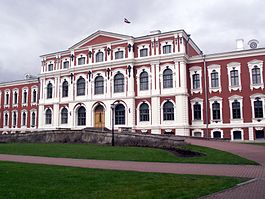 Jelgava Palace, the main residence of the dukes.

When Jacob died in 1682, his son, Friedrich Casimir, became the next duke. During his reign production continued to decrease. The duke himself was more interested in glamorous celebrations, and spent more money than he had. This resulted in his having to sell Tobago to the British. He died in 1698. During this period, the Commonwealth increased its influence in the political and economic life of the Duchy. Additionally, Russia showed an interest in this area.

The next Duke, Friedrich Wilhelm Kettler, was only six years old when he succeeded in 1698, and he was under the regency of his uncle Ferdinand — a Polish general. During this time the Great Northern War (1700–21) began between Sweden and Russia with its allies — the Commonwealth, Saxony and Denmark. As a result of the war, Russia took control of the central part of Latvia starting in 1710. In Courland, Russia also had such a strong influence that its ambassador, Peter Bestuzhev, became the most powerful man in the duchy. The Tsar of Russia, Peter the Great, received a promise from Friedrich Wilhelm that he would marry one of the daughters of the tsar's brother. By having this promise, Peter the Great wished to increase the influence of Russia in Courland. So, in 1710, Friedrich Wilhelm married Anna Ivanovna (later Empress of Russia), but on his way back from St Petersburg, he took ill and died. Anne ruled as duchess of Courland from 1711 to 1730.

After the death of Friedrich Wilhelm, the next candidate for the seat of duke was Ferdinand Kettler, but his residence was in Danzig. Because the law required the duke to reside within the Duchy, the Diet did not recognize him. Because Ferdinand was the last representative of Kettler's family, a remarkable number of candidates tried to gain the seat of duke during this period. One favorite was Maurice de Saxe, natural son of Frederick Augustus I the Strong, king of Poland. He was elected duke in 1726, but only managed to maintain himself by force of arms till the next year. Russia disliked him and sent an army to western Courland to destroy Maurice's base. As the result Maurice had to leave Courland and Russia increased its influence. Russian influence increased further when Frederick August III, the Elector of Saxony, in his successful bid to succeed his father on the Polish throne in the 1730s, agreed to grant Anna of Russia her choice of successor to the Courish duchy in exchange for Russian support in the War of the Polish Succession. (Because of the duchy's position as a Polish vassal and Ferdinand Kettler's lack of issue, the duchy would otherwise formally have devolved onto the Polish throne.) Anna appointed Ernst Johann von Biron duke of Courland in 1737.

Von Biron received remarkable financial support from Russia and invested it in construction - for example, the castle of Schloss Ruhenthal projected by the distinguished Italian architect Bartolomeo Rastrelli. Anna Ivanovna died in 1740, resulting in von Biron's exile to Siberia the following year. From there, through the Council of the Duke, he continued to control the Duchy, with the agreement of the king of Poland. However, the landowners of Courland disliked that and even refused to follow the regulations of the Council of the Duke.

Louis Ernest of Brunswick-Lüneburg was selected as Biron's successor on 27 June 1741 with the support of his cousin Maria Theresa of Austria, but whilst in St Petersburg to get this title ratified, Elizabeth of Russia carried out a coup on 6 December 1741 and he lost the title.

King Augustus III of Poland proclaimed his son, Carl Christian Joseph of Saxony, the next Duke. Thus, the Duchy of Courland had two dukes simultaneously thereafter. The situation became extremely tense — one part of the landowners accepted von Biron, the other, Carl of Saxony. The Empress Catherine II of Russia (reigned 1762–96) solved this situation by recalling Ernst von Biron from exile in 1763. By doing this, she avoided the possible increase of influence of the Commonwealth in Courland. However, political fighting had exhausted Ernst Biron, and he turned the seat of duke over to his son, Peter von Biron, in 1769. But political tumult continued in Courland. Some landowners supported the Commonwealth, some Russia. Ultimately, Russia determined the further fate of Courland when with its allies it began the third division of Poland (1795). Given a "nice recommendation" by Russia, Duke Peter von Biron gave up his rights to Russia in 1795. With the signing of the final document on March 28, 1795, the Duchy of Courland was incorporated into the Russian state and title of Duke of Courland was added to the title of Russian emperors. 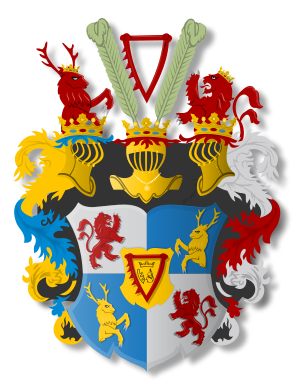 Coat of arms of Dukes of Courland of the Kettler family