The Duchy of Holstein (German: Herzogtum Holstein, Danish: Hertugdømmet Holsten) was the northernmost state of the Holy Roman Empire, located in the present German state of Schleswig-Holstein. It was established when King Christian I of Denmark had his County of Holstein-Rendsburg elevated to a duchy by Emperor Frederick III in 1474. Holstein was ruled jointly with the Duchy of Schleswig by members of the Danish House of Oldenburg for its entire existence.

From 1490 to 1523 and again from 1544 to 1773 the Duchy was partitioned between various Oldenburg branches, most notably the dukes of Holstein-Glückstadt (identical with the Kings of Denmark) and Holstein-Gottorp. The Duchy ceased to exist when it was annexed by the Kingdom of Prussia in 1866 after the Second Schleswig War.

The northern border of Holstein along the Eider River had already formed the northern border of the Carolingian Empire, after Emperor Charlemagne upon the Saxon Wars reached an agreement with King Hemming of Denmark in 811. The lands of Schleswig beyond the river remained a fief of the Danish Crown, while Holstein became an integral part of East Francia, the Kingdom of Germany and the Holy Roman Empire.

Adolf VIII, the last Count of Holstein-Rendsburg and Duke of Schleswig had died without heirs in 1459. As Schleswig had been a Danish fief, it had to fall back to King Christian I of Denmark, who, himself a nephew of Adolf, also sought to enter into possession of Holstein. He was backed by the local nobility, who supported the continued common administration of both lands and by the 1460 Treaty of Ribe proclaimed him as the new Count of Holstein.

Nevertheless the comital Holstein lands south of the Eider River officially remained a mediate fief held by the Ascanian dukes of Saxe-Lauenburg. In 1474 Emperor Frederick III conferred Imperial immediacy to Christian by elevating him to a Duke of Holstein.

In 1544, the Duchies of Schleswig and Holstein, were partitioned in three parts between Christian's grandson Christian III of Denmark and his two younger half-brothers, who had to renounce the Danish throne:

In 1640, the County of Holstein-Pinneberg, whose ruling house was extinct, was merged in the royal part of the Duchy of Holstein. 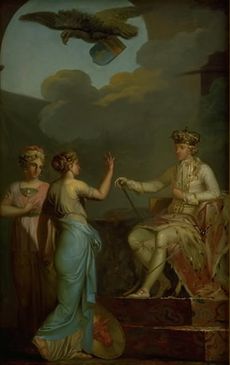 Allegorical depiction of Christian VII of Denmark uniting the royal and ducal parts of Holstein, painted by Nicolai Abildgaard

His remaining territories formed the Duchy of Holstein-Gottorp administered from Kiel. In 1773, Charles Frederick's grandson, Paul, Emperor of Russia finally gave his Holstein parts to the Danish king, in his function as duke of Holstein, in exchange for the County of Oldenburg and Holstein was reunited as a single state.

With the dissolution of the Holy Roman Empire in 1806, the Duchy of Holstein gained sovereignty.

After the 1815 Congress of Vienna the Holstein duchy of the Danish crown became a member of the German Confederation, resulting in several diplomatic and military conflicts about the so-called Schleswig-Holstein Question. Denmark managed to defend its rule over Holstein in the First Schleswig War of 1848-51 against the Kingdom of Prussia, however when in the course of the 1864 Second Schleswig War Prussian and Austrian troops crossed the Eider and conquered Schleswig, Christian IX of Denmark had to renounce both Schleswig and Holstein in the 1864 Treaty of Vienna. Holstein was put under Austrian administration until in the aftermath of the Austro-Prussian War it was finally annexed by Prussia in 1866.

The Danish king in his function as duke of Holstein, and duke of Schleswig, appointed statholders (German: Statthalter; Latin: produx) to represent him in the duchies. The statholders fulfilled the tasks related to the ducal power as patrimonial lords in the royal shares of Holstein and Schleswig, as well as the royal part in the condominial government with the houses of Gottorp and Haderslev (the latter extinct in 1580) for all the duchies of Holstein (until retreat of Gottorp in 1773) and Schleswig (until Gottorp's deposal from dukedom there in 1720).