The Duchy of Nivernais (Duché de Nivernais) is a former province of the Kingdom of France centred around the city of Nevers, of which the duchy took its name.

In 1539, it was directly annexed to France and became a duchy in the peerage of France. For a time, it was held by a cadet branch of the House of Gonzaga. This branch inherited the Duchy of Mantua from the senior Gonzaga line (when it became extinct in 1627) and ruled Mantua until 1708, when the branch died out in the male line. Charles IV Gonzaga sold the duchies of Nevers and Rethel in 1659 to Cardinal Mazarin. His family held the duchy of Nevers until the French Revolution.

Following the Decree dividing France into departments in 1790, the province was broken up into three new departments: Nièvre (forming the main part), Yonne (northernmost parts), and Cher (south eastern most parts).[1] 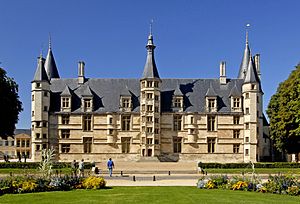 The Ducal Palace in Nevers

Following the Decree dividing France into departments announced on 22 December 1789, the Duchy of Nevers was disestablished. The majority of the county formed the new Nièvre (forming the main part), Yonne (northernmost parts), and Cher (south eastern most parts).[1]