The Duchy of Parma was created in 1545 from that part of the Duchy of Milan south of the Po River, which was conquered by the Papal States in 1512. These territories, centered on the city of Parma, were given as a fief for Pope Paul III's illegitimate son, Pier Luigi Farnese.

In 1556, the second Duke, Ottavio Farnese, was given the city of Piacenza, becoming thus also Duke of Piacenza, and so the state was thereafter properly known as the Duchy of Parma and Piacenza (Italian: Ducato di Parma e Piacenza).

The Farnese family continued to rule until their extinction in 1731, when the duchy was inherited by the young son of the King of Spain, Don Charles, whose mother Elizabeth Farnese was the Farnese heiress. He ruled until the end of the War of the Polish Succession in 1735, when Parma was ceded to Emperor Charles VI in exchange for the Two Sicilies.

The Habsburgs only ruled until the conclusion of the Treaty of Aix-la-Chapelle in 1748, when it was ceded back to the Bourbons in the person of Don Philip, Don Charles's younger brother, which received also the little Duchy of Guastalla. As Duke Philip, he became the founder of the House of Bourbon-Parma reigning over the Duchy of Parma, Piacenza and Guastalla (Italian: Ducato di Parma, Piacenza e Guastalla). 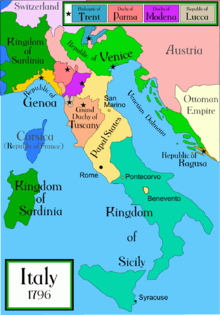 The Duchy of Parma and Piacenza (in red) in late 18th century Italy.

In 1796, the duchy was occupied by French troops under Napoleon Bonaparte, and the political situation of the State became extremely confused. Duke Ferdinand maintained his throne under French military governors until the Treaty of Aranjuez of 1801, when a general agreement between the House of Bourbon and Napoleon formally decided the cession of the duchy to France in exchange for Tuscany, but the Duke lasted in Parma until he died in 1802, perhaps by poisoning. Napoleon was undecided about the future of the duchy, aspiring to a total engagement of the Bourbons in the European wars as his allies. Even as French laws and administration were gradually introduced, the formal annexation to the French Empire was declared only in 1808 after the outbreak of the conflict against Bourbonic Spain. The duchy was reformed as the département of Taro.

In 1814, the duchies were restored under Napoleon's Habsburg wife, Marie Louise, who ruled them for the rest of her life. After Marie Louise's death in 1847, the Duchy was restored to the Bourbon-Parma line, which had been ruling the tiny Duchy of Lucca. In this context, Guastalla was ceded to Modena. The Bourbons ruled until 1859, when they were driven out by a revolution following the French and Sardinian victory in the war against Austria (called Austrian War in France and Second War of Independence in Italy).

The House of Bourbon continues to claim the title of duke of Parma to this day. Prince Carlos of Bourbon-Parma has held the title since 2010.