The Duchy of Prussia (German: Herzogtum Preußen, Polish: Księstwo Pruskie) or Ducal Prussia (German: Herzogliches Preußen, Polish: Prusy Książęce) was a duchy in eastern Prussia established during the Protestant Reformation in 1525. It was the first Lutheran duchy with a dominant German-speaking population, as well as Polish and Lithuanian minorities. In old texts and in Latin, the term Prut(h)enia refers alike to Ducal Prussia, its western neighbor Royal Prussia, and their common predecessor, Teutonic Prussia. The adjectival form of the name was "Prut(h)enic".

In 1525 during the Protestant Reformation, the Grand Master of the Teutonic Knights, Albert, secularized the order's Prussian territory, becoming Albert, Duke of Prussia. His duchy, which had its capital in Königsberg (Polish: Królewiec, Lithuanian: Karaliaučius; modern Kaliningrad), was established as fief of the Crown of Poland. It was inherited by the Hohenzollern prince-electors of Brandenburg in 1618; this personal union is referred to as Brandenburg-Prussia. Frederick William, the "Great Elector" of Brandenburg, achieved full sovereignty over the territory in the 1657 Treaty of Wehlau, which was confirmed in the 1660 Treaty of Oliva. The Duchy of Prussia was elevated to the Kingdom of Prussia in 1701.

As Protestantism spread among the laity of the Teutonic Monastic State of Prussia, dissent began to develop against the Roman Catholic rule of the Teutonic Knights, whose Grand Master, Albert of Brandenburg-Ansbach, a member of a cadet branch of the House of Hohenzollern, lacked the military resources to assert the order's authority.

After losing a war against the Kingdom of Poland, and with his personal bishop, Georg von Polenz of Pomesania and of Samland, who had converted to Lutheranism in 1523,[1] and a number of his commanders already supporting Protestant ideas, Albert began to consider a radical solution.

At Wittenberg in 1522 and at Nuremberg in 1524, Martin Luther encouraged him to convert the order's territory into a secular principality under his personal rule, as the anachronistic Teutonic Knights would not be able to survive the Protestant Reformation.[2] 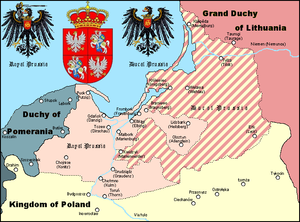 Duchy of Prussia (striped) in the second half of the 16th century.

On April 10, 1525 Albert resigned his position, became a Protestant, and in the Prussian Homage was granted the title "Duke of Prussia" by his new feudal overlord, King Sigismund I the Old of Poland, who was also his uncle. In a deal partially brokered by Luther, Ducal Prussia became the first Protestant state, anticipating the dispensations of the Peace of Augsburg of 1555. The "S" on the duchy's coat of arms represented Albert's sovereign, Sigismund. Charles V, Holy Roman Emperor, and Pope Clement VII objected to the Prussian Homage, which was derided as the Krakauer Kuhhandel ("Cracow horse-trading")[citation needed].

The Prussian Homage (by Jan Matejko, 1882, National Museum, Kraków): Albert receives eastern Prussia as a fief from King Sigismund I of Poland in 1525.

When Albert returned to Königsberg, he publicly declared his conversion and announced to a quorum of Teutonic Knights his new ducal status. The knights who disapproved of the decision were pressured into acceptance by Albert's supporters and the burghers of Königsberg, and only Eric of Brunswick-Wolfenbüttel, Komtur of Memel, opposed the new duke. On 10 December 1525, at their session in Königsberg, the Prussian estates established the Lutheran Church in Ducal Prussia by deciding the Church Order.[1]

By the end of Albert's rule, the offices of Großkomtur and Ordensmarschall had deliberately been left vacant and the order had only 55 knights in Prussia. Some of the knights converted to Lutheranism in order to retain their property and then married into the Prussian nobility, while others returned to the Holy Roman Empire and remained Catholic.[3] These remaining Teutonic Knights, led by the next Grand Master, Walter von Cronberg, continued to unsuccessfully claim Prussia, but retained much of the estates in the Teutonic bailiwicks outside of Prussia.

On 1 March 1526 Albert married Princess Dorothea, daughter of King Frederick I of Denmark, thereby establishing political ties between Lutheranism and Scandinavia. Albert was greatly aided by his elder brother George, Margrave of Brandenburg-Ansbach, who had already earlier established the Protestant religion in his territories of Franconia and Upper Silesia. Albert also found himself reliant on support from his Jagiellonian uncle Sigismund I of Catholic Poland, as the Holy Roman Empire and the Roman Catholic Church had banned him for his Protestantism. 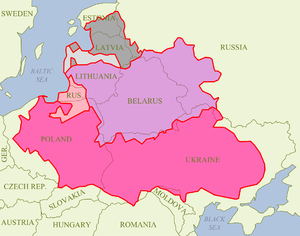 Outline of the Polish–Lithuanian Commonwealth with its major subdivisions after the 1618 Truce of Deulino, superimposed on present-day national borders.
Crown of the Kingdom of Poland
Grand Duchy of Lithuania
Duchy of Livonia
Duchy of Prussia, Polish fief
Duchy of Courland and Semigallia, Commonwealth fief

The Teutonic Order had only superficially carried out its mission to Christianize the native rural population and had erected few churches within the state's territory.[1] There was little longing for Roman Catholicism. Baltic Prussian and Prussian Lithuanian peasants continued to practice pagan customs in some areas, for example adhering to beliefs in Perkūnas (Perkunos), symbolised by the goat buck, Potrimpos, and Pikullos (Patollu) while "consuming the roasted flesh of a goat".[4] Bishop George of Polentz had forbidden the widespread forms of pagan worship in 1524, and repeated the ban in 1540.[1]

Already on 18 January 1524 Bishop George had ordered to only use native languages at baptisms, which improved the access towards the people.[1] There was little active resistance to the new creed, although the fact that the Teutonic Knights had brought Catholicism and Protestantism made the transition easier.[5]

The Church Order of 1525 provided for visitations of the parishioners and pastors, first carried out by Bishop George in 1538.[1] Because Ducal Prussia was ostensibly a Lutheran land, authorities travelled throughout the duchy ensuring that Lutheran teachings were being followed and imposing penalties on pagans and dissidents. The rural population of native descent was only thoroughly Christianised starting with the Reformation in Prussia.[1]

A peasant rebellion broke out in Sambia (German: Samland) in 1525. The combination of taxation by the nobility, the furor of the Protestant Reformation, and the abrupt secularization of the Teutonic Order's remaining Prussian lands exacerbated peasant unrest. The relatively well-to-do rebel leaders, including a miller from Kaimen and an innkeeper from Schaaken in Prussia, were supported by sympathizers in Königsberg. The rebels demanded the elimination of newer taxes by the nobility and a return to an older tax of two marks for every Hufe (the Prussian hide measuring approximately forty acres).

They claimed to be rebelling against the harsh nobility, not against Duke Albert, who was away in the Holy Roman Empire, but they would only swear allegiance to him in person. Upon Albert's return from the Empire, he called for a meeting of the peasants in a field, whereupon he surrounded them with loyal troops and had them arrested without incident; the leaders of the rebellion were subsequently executed.[4] Although there were no more large-scale rebellions, Ducal Prussia became known as a land of Protestant dissent and sectarianism.[5]

In 1544 Duke Albert founded the Albertina University in Königsberg, which became the principal educational establishment for Lutheran pastors and theologians of Prussia.[1] The usage of the native languages in service made him appoint exiled Protestant Lithuanian pastors as professors (e.g. Stanislovas Rapolionis and Abraomas Kulvietis), making the Albertina also a centre of Lithuanian language and literature.[6]

While the composition of the nobility changed little in the transition from monastic state to duchy, the hold of the nobility over the dependent peasantry increased. Prussia's free peasants, called Kölmer (holders of free estates according to Culm law), held with about a sixth of the arable land a considerable share as compared with other nations in the feudal era.[7] The peasant rebellion had frightened the nobles, however, causing them to look to Duke Albert for leadership.

Administratively, little changed in the transition from the Teutonic Knights to ducal rule. Although he was formally a vassal of the crown of Poland, Albert retained self-government for Prussia, his own army, the minting of his currency, a provincial assembly (Prussian Diet, Landtag), and had substantial autonomy in foreign affairs.[8]

When Albert died in 1568, his teenage son (exact age is unknown) Albert Frederick inherited the duchy. Joachim II Hector, Elector of Brandenburg, who had converted to Lutheranism in 1539, was after the co-enfeoffment (Mitbelehnung) of his line of the Hohenzollern with the Prussian dukedom. So he tried for gaining his brother-in-law Sigismund II Augustus of Poland and finally succeeded, including the then usual expenses.

On 19 July 1569, when Albert Frederick rendered King Sigismund II homage and was in return enfeoffed as Duke of Prussia in Lublin, the King simultaneously enfeoffed Joachim II and his descendants as co-heir. Administration in the duchy declined as Albert Frederick became increasingly feeble-minded, leading Margrave George Frederick of Brandenburg-Ansbach to become Regent of Prussia in 1577.

Following King Sigismund III's Prussian regency contract (1605) with Joachim Frederick of Brandenburg and his Treaty of Warsaw, 1611, with John Sigismund of Brandenburg, confirming the Brandenburgian co-enfeoffment, these two regents guaranteed free practice of Catholic religion in prevailingly Lutheran Prussia. Based on these contracts some Lutheran churches were reconsecrated as Catholic places of worship (e.g. Nicholas Church, Elbing in 1612).

Transition into Brandenburg-Prussia in 1618

As in 1618, Albert Frederick had no surviving male heirs, the co-enfeoffment of 1569, confirmed by the Treaty of Warsaw in 1611, allowed his son-in-law, Elector John Sigismund of the Hohenzollern branch in Brandenburg, to become the duke's legal successor, thereafter ruling Brandenburg and Ducal Prussia in personal union.

In 1618, the Thirty Years' War broke out, and John Sigismund himself died the following year. His son, George William, was successfully invested with the duchy in 1623 by the king of Poland, Sigismund III Vasa, thus the personal union Brandenburg-Prussia was confirmed.[5] Many of the Prussian Junkers were opposed to rule by the House of Hohenzollern of Berlin and appealed to Sigismund III Vasa for redress, or even incorporation of Ducal Prussia into the Polish kingdom, although without success.[9]

King John II Casimir of Poland didn't take the Swedish-Prussian alliance lying down. He submitted a counter-offer and Frederick William accepted. On July 29, 1657 they signed the Treaty of Wehlau in Wehlau (Polish: Welawa; now Znamensk). In return for Frederick William's renunciation of the Swedish-Prussian alliance, John Casimir recognised Frederick William's full sovereignty over the Duchy of Prussia.[10] After almost 200 years of Polish suzerainty over the Teutonic Monastic State of Prussia and its successor Ducal Prussia, full sovereignty was regained. Therefore, Duchy of Prussia then became the more adequate appellation for the state. Full sovereignty was a necessary prerequisite for upgrading Ducal Prussia to become the sovereign Kingdom of Prussia, not to be confused with Polish Royal Prussia, in 1701.

Ducal Prussia's full sovereignty allowed Elector Frederick III of Brandenburg to become "king in Prussia" in 1701 without offending Emperor Leopold I. The government of de facto collectively ruled Brandenburg-Prussia, seated in Brandenburg's capital Berlin, mostly appeared under the higher ranking titles of Prussian government. After the Kingdom of Prussia's annexation of Royal Prussia in 1772, former Ducal Prussia — including previously Polish-controlled Royal Prussian Warmia (German: Ermland) — was reorganized into the Province of East Prussia, while most of former Royal Prussia became the Province of West Prussia. The Kingdom of Prussia, then consisting of East and West Prussia, being a sovereign state, and Brandenburg, being a fief within the Holy Roman Empire, were amalgamated de jure only after the latter's dissolution in 1806.

Lua error in Module:Coordinates at line 668: callParserFunction: function "#coordinates" was not found.ja:プロイセン公国