From 1416 to 1860, the House of Savoy ruled the Duchy of Savoy (Italian: Savoia, French: Savoie, German: Savoyen). The Duchy was a state in the northern part of modern-day Italy, with some territories that are now in France and Switzerland. It was a continuation of the County of Savoy. The duchy was a constituent state of the Holy Roman Empire, specifically its Upper Rhenish Circle.

The Duchy was created in 1416 following Sigismund, Holy Roman Emperor, awarding the title Duke to Count Amadeus VIII. The territory of the Duchy then included Moriana, the Valle d'Aosta, and Piedmont.

Being landlocked at its conception in 1388, the then-County of Savoy acquired a few kilometres of coastline around Nice. Other than this expansion, the 15th century was generally a time of stagnation. Pressure from neighboring powers, particularly France, prevented development, which characterizes the rest of the Renaissance era for Savoy.

The reign of Amadeus VIII was a turning point for the economy and the policy of the state, which deeply marked the history of the nation. His long reign was highlighted by wars (the country expanded its territory by defeating the Duchy of Monferrato and Lordship of Saluzzo), as well as reforms and edicts, and also some controversial actions. The first was in 1434, when he chose to withdraw to the Château de Ripaille, where, living the life of a hermit, he founded the Order of St. Maurice. In 1439, he received an appointment as antipope, which he accepted (under the name of Felix V), although he subsequently resigned a decade later out of a fear of undermining the religious unity of Christians. 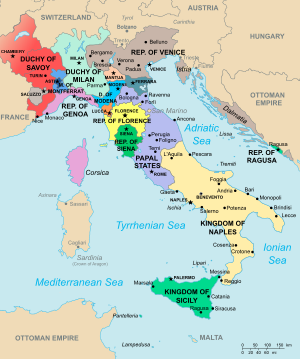 The second important action of the Government of Amadeo VIII was the creation of the Principality of Piedmont in August 1424; the management of which was entrusted to the firstborn of the family, as a title of honor. The duke left the territory largely formed from the old Savoy domain.

As a cultured and refined man, Duke Amadeus gave great importance to art. Among others, he worked with the famous Giacomo Jaquerio) in literature and architecture, encouraging the entry of art to the Italian Piedmont.

Amadeus' eldest son (also called Amadeus) having died prematurely in 1431, he was succeeded by a younger son, Louis. Louis was in turn succeeded by the weak Amadeus IX, who was extremely religious (he was eventually declared blessed) but exercised little practical power, allowing his wife, Yolande (Violante) of Valois, sister of Louis XI, to make very important decisions. During this period, France was more or less free to control the affairs of Savoy, which bound Piedmont to the crown in Paris.

The duchy's economy suffered during these years, not only because of war, but also because of the poor administration by Violante and the continued donations by Amadeus IX to the poor of Vercelli. On Amadeus' death the future of the state was entrusted to the hands of a boy, Philibert I, who died childless at the early age of seventeen, after reigning for ten years. He was succeeded by his younger brother Charles I, whose accession seemed to promise a rebirth of the country, but who also died after a few years, leaving the duchy to his infant son Charles II. The younger Charles in turn died at the age of six, and the duchy was inherited by his great-uncle Philip II, son of Louis. After a reign of approximately 18 months, Philip also died, and was succeeded by his teenage son Philibert II.

When Philibert died in 1504, he was succeeded by Charles III the Good, who has been regarded as a rather weak ruler, but who succeeded to the duchy as an adult and whose long reign at least gave Savoy a measure of political stability. In 1515, Piedmont was occupied by foreign armies, and Francis I of France was waiting for the opportunity to permanently annex the duchy of Savoy and its possessions. In 1536 Francis I ordered the occupation of the Duchy, which was invaded by a strong military contingent. Charles III realized too late the weakness of the state, and tried to defend the city of Turin, but the city was lost on April 3 of the same year. Charles III retired in Vercelli, trying to continue the fight, but never saw the state free from occupation.

Charles' son and successor Emmanuel Philibert was the Duke who more than any influenced the future policy of Savoy, managing to put an end to the more-than-twenty-year-long occupation. The Peace of Cateau-Cambrésis, signed in 1559, restored full autonomy for the duchy.

Emmanuel Philibert realised that he could no longer trust France, so he moved the capital of the duchy from Chambéry to Turin, strengthening the defences of the latter by constructing a complex system of fortifications known as the Cittadella (which still can be observed in places, although it was largely destroyed by the subsequent expansion of the city). From his military experience in Flanders, Emmanuel Philibert learned how to run an army, having won the famous Battle of St. Quentin. He was the first Duke of Savoy to establish a stable military apparatus that was not composed of mercenaries but rather by specially trained Piedmontese soldiers.

His son, Charles Emmanuel I, extended the Duchy to the detriment of the lordships of Monferrato and the territory of Saluzzo, previously ceded to France, in 1601 under the Treaty of Lyon. Unfortunately, the wars of Charles Emmanuel mostly ended in defeats. Nevertheless, he is remembered as "Charles the Great" since he was a versatile and cultured man, a poet and a skillful reformer. He was able to manage the Duchy at a time of severe crisis vis-a-vis the European powers and found support from the court of the Habsburgs. The policy of Charles Emmanuel was in fact based more on actions of international warfare, such as the possessions of the Marquis of Saluzzo, and the wars of succession of the duchies of Mantua and Monferrato. During these wars Charles Emmanuel generally sided with Spain, but on occasion he followed the French (as, for example, the Treaty of Susa required).

During the seventeenth century, the influence of the court of Versailles came to press on the Piedmont. Due to the proximity of the Duchy of Milan, troops were stationed in France, and the disposal of Pinerolo (one of the most important strongholds of Savoy), were situated close to Turin. The court, which had been under Spanish influence during the reign of Charles Emmanuel, became French under his three successors. Victor Amadeus I married Maria Christina of Bourbon-France, the future Madame Royal. Maria Christina held the real power in Savoy during the short reign of Francis Hyacinth and during the minority of his brother Charles Emmanuel II.

The strong French influence, plus various misfortunes, repeatedly hit Piedmont following the death of Charles Emmanuel II. An outbreak of plague in 1630 contributed significantly to the already widespread poverty.

The Wars of Succession of Monferrato were very bloody in the countryside and subjected Monferrato Castle to a long siege. These developments of arms and politics were hard on the economy and future history, exacerbating the already difficult situation after the death of Victor Amadeus I. He was succeeded for a short period of time, by the firstborn male Francis Hyacinth. The regency was entrusted to Carlo Emanuele II from their mother Christine Marie of France, whose followers were known as Madame. Because of this, Savoy was turned into a satellite state of Louis XIII. The supporters of Maurice of Savoy and Prince Thomas Francis of Savoy, together with their followers, took the name of Principles.

The city of Turin was soon besieged by both warring factions. The Principles won, making Turin subject to great looting on July 27, 1639. It was not until 1642 that an agreement was reached between the two factions; by now, the widow of Victor Amadeus I had placed Victor's son Charles Emmanuel II on the throne, and ruled in his place, even past the child's age of majority.

During the regency, there was a resurgence of religious wars. In 1655, Savoyard troops massacred large numbers of the Protestant population of the Waldensian valleys, known as Pasque Piedmont. The English government intervened,[1] and they were eventually stopped by international pressure. A final agreement with the Waldensians was carried out in 1664.

The government of Charles Emmanuel II was the first step towards major reforms put forth by his successor into the next century. Of particular importance were the creation of militias in Savoy and the establishment of the first public school system in 1661. A cultured man, but also a great statesman, he learned the lessons from Europe by Louis XIV. He wanted to limit this to the court in the sumptuous palace of Venaria Reale, a masterpiece of Baroque architecture, and a copy recreated in Italy of the magnificence of the Palace of Versailles. It was the time of great urban expansion, and Charles Emmanuel II promoted the expansion of Turin and its reconstruction in the baroque style. After his death, he was followed by a period of a regency held by the new Madama Reale Maria Giovanna Battista of Savoy-Nemours.

From duchy to kingdom

The son of Charles Emmanuel II, Victor Amadeus II, was kept under the regency of his mother, the French born Marie Jeanne of Savoy. In the early years of the reign, his energetic mother attempted to unite the crown of Savoy with the Portuguese, and thus risked compromising the very survival of the duchy (Piedmont would be reduced like other Italian states to a subsidiary of a foreign power). Under the determined hand of the regent, Victor Amadeus II, Savoy entered into bad relations with the crown in Paris, which led to the invasion of the duchy by French forces. Savoy defeated the army of Louis XIV in the Siege of Cuneo, but was dramatically defeated in the battles of Staffarda and Marsaglia. Victor Amadeus II married Anne Marie d'Orléans, niece of Louis XIV. 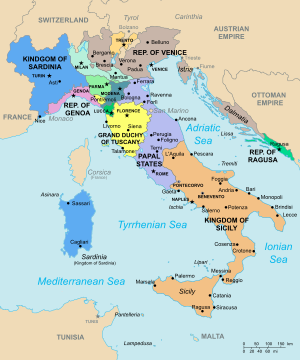 After the War of the Great Alliance, Savoy sided during the first phase of the War of Spanish Succession alongside Louis XIV. By changing alliances, a new French invasion of Savoy came about, with the troops of the Marquis of Fouillade defeating the troops of Savoy and chasing them into Turin. The event, which succeeded only thanks to the arrival on the battlefield of the duke's cousin, Eugene of Savoy, resolved a conflict that had spread destruction in Savoy.

At the end of the war in 1713, Savoy received Sicily, and Victor was awarded the title of King besides the title of Duke of Savoy. According to the treaty of London of 1718, Victor Amadeus II exchanged Sicily for Sardinia in 1720. Sardinia was then changed into the Kingdom of Sardinia. This newly formed country was called the States of Savoy or the Kingdom of Sardinia, and was composed of several states including Savoy, Piedmont, Aosta Valley, Nice, Oneglia and Sardinia.

In 1860, under the terms of the Treaty of Turin, the Duchy of Savoy was annexed by France. The last Duke of Savoy, Victor Emmanuel II, became King of Italy.

Main articles: Counts and dukes of Savoy and List of monarchs of Sardinia § Kings of Sardinia

The flag of Savoy is white cross on a red field. It is based on a crusader flag, and as such is identical in origin to the flag of the Knights of Malta (whence the modern Flag of Malta and the Flag of the Sovereign Military Order of Malta), and others (flags of Denmark and Switzerland, with inverted colors those of England and Genoa, among others). It was possibly first used by Amadeus III, Count of Savoy, who went on the Second Crusade in 1147.[citation needed] In the 18th century, the letters "FERT" were sometimes added in the cantons to distinguish the flag from the Maltese one.