The Duchy of Teschen (German: Herzogtum Teschen), also Duchy of Cieszyn (Polish: Księstwo Cieszyńskie) or Duchy of Těšín (Czech: Těšínské knížectví, Latin: Ducatus Tessinensis) was an autonomous Silesian duchy centered on Cieszyn (Teschen) in Upper Silesia. During the feudal division of Poland it was split off with the Duchy of Racibórz in 1281 and ruled by Silesian dukes from the Piast dynasty since 1290.[1]

The ducal lands initially comprised former Lesser Polish territories east of the Biała River, which about 1315 split off again as the Duchy of Oświęcim, while the remaining duchy became a Bohemian fief in 1327. After the bulk of Silesia was conquered by the Prussian king Frederick the Great in 1742, Cieszyn/Těšín together with the duchies of Troppau (Opava), Krnov and Nysa remained with Austrian Silesia. The ducal title was held by the Austrian archdukes from the House of Lorraine until 1918.

The duchy shared the history of the Cieszyn Silesia region, and also in part Silesia in general. The area had been the southeastern-most part of the medieval Duchy of Silesia established upon the death of the Polish duke Bolesław III Wrymouth in 1138. In 1172 the sons of the first Silesian Piast duke Władysław II the Exile divided their heritage, whereby the lands of Cieszyn fell to Duke Mieszko I of Racibórz. 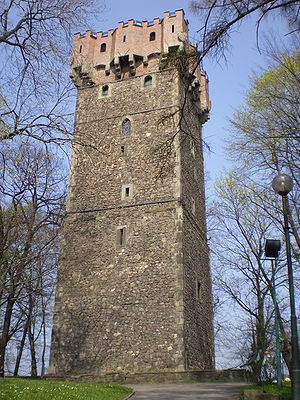 Piast castle tower in Cieszyn, part of the former seat of the dukes

Mieszko himself in 1202 occupied the neighbouring Duchy of Opole, forming the united Upper Silesian Duchy of Opole and Racibórz. After the death of Mieszko's grandson Duke Władysław of Opole in 1281, Upper Silesia was again divided among his sons, and the eldest Mieszko became the first Duke of Cieszyn in 1290. 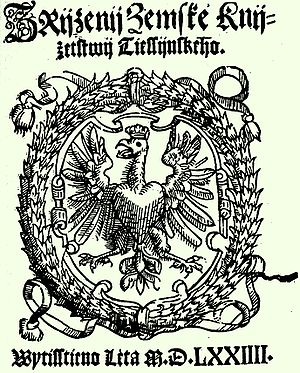 Title page of the Constitution of the Duchy of Teschen (printed in Czech), issued by the Duke Wenceslaus III Adam in 1573

After Mieszko's death in 1315, his eldest son Władysław took the Cieszyn lands east of the Biała River and established the Duchy of Oświęcim. The younger son Casimir I retained the western part and in 1327 swore homage to the King of Bohemia, John of Luxembourg. After that Cieszyn became an autonomous fiefdom of the Kingdom of Bohemia, later Crown of Bohemia.[2] Local Piast rulers often possessed other lands outside the Duchy of Těšín itself, in some periods of time, for example the Duchy of Siewierz, half of Głogów and some parts of Bytom.

After the death of Duke Boleslaus I in 1431, the rule over the duchy was shared by his wife Eufemia and their four sons.[3] In 1442 the duchy was divided between sons who were all formally Dukes of Těšín but the real control over the duchy passed to Boleslaus II and Przemyslaus II who after the death of Boleslaus II in 1452 ruled alone. During the reign of Duke Wenceslaus III Adam from 1528 on the duchy shifted to Protestantism according to the cuius regio, eius religio rule. His son and successor Adam Wenceslaus shifted back to Roman Catholicism in 1610. In 1570s the duke struggled financial problems and had to sell most of the towns as state countries including Bielsko state country.

The Cieszyn Piast's rule continued to 1653, ending with the death of the last scion Duchess Elizabeth Lucretia, after which the duchy lapsed directly to the Bohemian monarchs,[4] at that time the Habsburg emperor Ferdinand III and his son King Ferdinand IV.

The Habsburg dynasty ruled Teschen from 1653 on. In 1722 Emperor Charles VI of Habsburg granted it to Duke Leopold of Lorraine in compensation for his maternal grandmother's rights to the north-Italian Duchy of Montferrat, which the emperor had taken and given to the Dukes of Savoy in 1708 as part of their alliance pact. Leopold's son-in-law Emperor Francis I of Habsburg-Lorraine later gave it to his eldest surviving daughter, Maria Christina, who married Prince Albert of Saxony in 1766, who thus became known colloquially as the Duke of Saxe-Teschen.

Although most of Silesia had passed to the Kingdom of Prussia in 1742 after the First Silesian War, Teschen remained under Austrian control as part of Austrian Silesia. Albert and Maria Christina's marriage remained childless, and upon the death of the widowed Albert in 1822 the duchy passed to their adopted son, Archduke Charles of Austria, who became Herzog von Teschen and started the Teschen branch of the Habsburg-Lorraine Dynasty. The title passed down his line, first to his eldest son, Albert Frederick, and then, in 1895, to Albert Frederick's nephew, Archduke Frederick Maria.

With Austrian Silesia, the territory of Teschen became part of the Austrian Empire in 1804 and a Cisleithanian crown land of Austria–Hungary in 1867. At the end of World War I the duchy was disestablished with the dissolution of Austria-Hungary.

Local Polish and Czech self-governments were established on the territory of Cieszyn, which on 5 November 1918 signed an interim agreement according to which the territory – including the town of Cieszyn itself – was divided along the Olza (Olše, Olsa) River. The convention however failed to settle the border conflict between the newly established state of Czechoslovakia and the Second Polish Republic claiming further areas of the former Cieszyn duchy with a predominantly Polish speaking population. The ongoing conflict escalated when Czechoslovak troops crossed the Olza on 23 January 1919, starting the Polish–Czechoslovak War.

Clashes of arms continued until 31 January, but neither of the belligerents benefited: at the 1920 Spa Conference the division of the former duchy along the Olza was confirmed. The eastern part of Cieszyn Silesia was incorporated into the Polish Autonomous Silesian Voivodeship, while the western part (including the Zaolzie region) became part of Czechoslovakia. This was confirmed on 5 August 1920 by the Conference of Ambassadors.[5] In 1945 the German population was expelled. 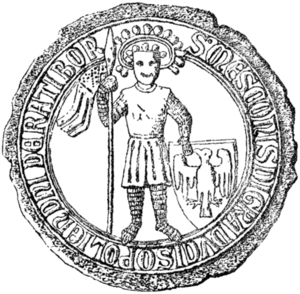 Reversion to the Lands of the Bohemian Crown, ruled by the House of Habsburg since 1526. 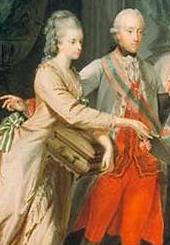 In 1722 Emperor Charles VI vested his nephew Leopold of Lorraine with the ducal title.