Duchy of the Archipelago

Background and establishment of the Duchy

The Italian city states, especially the Republic of Genoa, Pisa, and the Republic of Venice, had been interested in the islands of the Aegean long before the Fourth Crusade. There were Italian trading colonies in Constantinople and Italian pirates frequently attacked settlements in the Aegean in the 12th century. After the collapse and partitioning of the Byzantine Empire in 1204, in which the Venetians played a major role, Venetian interests in the Aegean could be more thoroughly realized.

The Duchy of the Archipelago was created in 1207 by the Venetian nobleman Marco Sanudo, a participant in the Fourth Crusade and nephew of the former Doge Enrico Dandolo, who had led the Venetian fleet to Constantinople. This was an independent venture, without the consent of the Latin emperor Henry of Flanders. Sanudo was accompanied by Marino Dandolo and Andrea and Geremia Ghisi (as well as Filocalo Navigajoso, possibly). He arranged for the loan of eight galleys from the Venetian Arsenal, set anchor in the harbor of Potamidides, in the southwest of Naxos, and largely captured the island.

The Naxiotes continued to resist, however, and established a base inland, around the fortress of Apalyros/Apalire. The latter fell to Sanudo after a five or six weeks' siege, despite the assistance rendered to the Greeks by the Genoese, Venice's main competitors.

With the entire island occupied in 1210, Sanudo and his associates soon conquered Melos and the rest of the islands of the Cyclades, and he established himself as Duke of Naxia, or Duke of the Archipelago, with his headquarters on Naxos. Sanudo rebuilt a strong fortress and divided the island into 56 provinces, which he shared out as fiefs among the leaders of his men, most of whom were highly autonomous and apparently paid their own expenses. Navigaojso had been granted his island domain by Henry of Flanders and was technically vassal of the Latin Empire; Sanudo himself recognized the Latin Empire's authority rather than making the Duchy a vassal of Venice. The conqueror himself ruled for twenty years (1207–27). He held in his personal possession Paros, Antiparos, Milos, Sifnos, Kythnos, Ios, Amorgos, Kimolos, Sikinos, Syros, and Pholegandros.

Sanudo's fellow crusaders conquered lordships of their own, sometimes as vassals of Sanudo like Dandolo for Andros. Although they are often considered to have become Sanudo's vassals as well,[1] the Ghisi brothers, who held Tinos, Mykonos, and the Northern Sporades (Skiathos, Skyros, Skopelos) never recognized the suzerainty of Sanudo. Instead, like him they were directly vassals of the Latin Emperors.[2] Some families thought earlier[3] to have settled at this time in the islands (Querini, Barozzi) were in fact established in the 14th century.[4] Further south, Kythera (or Cerigo), held by Marco Venier, and Antikythera (or Cerigotto), held by Jacopo Viaro chose to become vassals of Venice.[5] 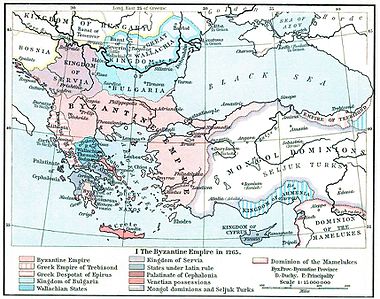 The Duchy of Naxos and states in the Morea, carved from the Byzantine Empire, as they were in 1265 (William R. Shepherd, Historical Atlas, 1911)

The institution of European feudalism caused little disruption to the local islanders who were familiar with the rights of a landowner class under the Byzantine system of the pronoia. The significant legal distinctions between the Byzantine pronoia and feudalism were of little immediate consequence to those who farmed the land or fished the waters in question. In most cases, the local population submitted relatively peacefully to the authority of their new Venetian lords. Sanudo and his successors prudently followed a conciliatory course with their Byzantine subjects, granting even fiefs to certain among them, in an effort to bind them to the dynasty.

The Venetians brought the Catholic Church with them, but, as they were a minority of habitually absentee landowners, most of the population remained Greek Orthodox. Marco Sanudo himself established a Latin archbishopric on Naxos, but in contrast to his successors did not attempt to forcibly convert the Greek Orthodox majority. These moves consisted primarily in imposing restrictions on Orthodox clergy and the exclusion of Orthodox Christians from positions of authority.

The islands were of great importance in Venetian grand strategy, with their valuable trade routes to Anatolia and the Eastern Mediterranean, which the Venetians could now control; Aside from providing safe traveling routes to Venetian ships, the Venetians also exported to Venice corundum and marble, which they mined on Naxos. Certain Latin feudal rights survived in the island of Naxos and elsewhere until they were abrogated in 1720 by the Ottomans.

The Annals of the Latin Archipelago center on the family histories of Sanudo and Dandolo, Ghisi, Crispo and Sommaripa, Venier and Quirini, Barozzi and Gozzadini. Twenty-one dukes of the two dynasties ruled the Archipelago, successively as vassals of the Latin Emperors at Constantinople, of the Villehardouin dynasty of princes of Achaea, of the Angevins of the Kingdom of Naples (in 1278), and after 1418 of the Republic of Venice.

In 1248,[6] the Duchy was nominally granted to William of Villehardouin, Prince of Achaea. Marco II Sanudo lost many of the islands, except Naxos and Paros, to the forces of the renewed Byzantine Empire under the admiral Licario in the late 13th century. The Byzantine revival was to prove short-lived though, as they relinquished control of their gains in 1310.

In 1317 the Catalan Company raided the remnants of the Duchy; in 1383, the Crispo family led an armed insurrection and overthrew Sanudo's heirs as Dukes of Archipelago. Under the Crispo dukes, social order and agriculture decayed, and piracy became dominant. 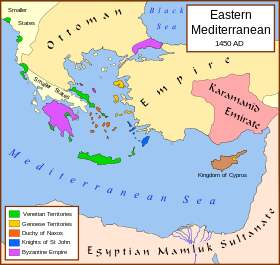 Before the last Latin Christian duke, Jacopo IV Crispo, was deposed in 1566 by Ottoman Sultan Selim II, he was already paying the Sultan tribute. The Sultan's appointed representative, the last Duke of Archipelago (1566–79) was a Portuguese Jew (Marrano), Joseph Nasi.

Latin Christian rule was not entirely removed after that date: the Gozzadini family in Bologna survived as lords of Siphnos and other little islands in the Cyclades until 1617, and the island of Tenos remained Venetian until 1714. The last Venetian ports in Morea (the Peloponnese) were captured in 1718. Gaspar Graziani, a Dalmatian nobleman, was awarded the title of Duke of the Archipelago in 1616, but the island was again under direct Ottoman rule at the end of 1617; he was the last to hold the title.

Today, Cyclades islands such as Syros and Tinos have some entirely Catholic villages and parishes, while many Greeks from the Cyclades have surnames with a distinctly Italo-Venetian origin e.g. Venieris, Ragousis, Dellaportas, Damigos etc.

Dukes of the Archipelago 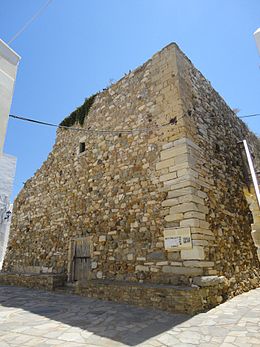