From Infogalactic: the planetary knowledge core
Jump to: navigation, search
For the steamship, see TSS Duke of Albany. 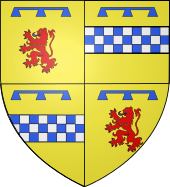 Arms of the Albany Stewarts

Duke of Albany is a peerage title that has occasionally been bestowed on the younger sons in the Scottish and later the British royal family, particularly in the Houses of Stuart and Windsor.

The Dukedom of Albany was first granted in 1398 by King Robert III of Scotland on his brother, Robert Stewart, the title being in the Peerage of Scotland. "Albany" was a broad territorial term representing the parts of Scotland north of the River Forth, roughly the former Kingdom of the Picts. The title (along with the Dukedom of Rothesay, the first Dukedom created in Scotland) was forfeited in 1425 due to the treason of the second Duke.

The title was again created in 1458 for Alexander Stewart but was forfeit in 1483. His son John Stewart, was restored to the second creation in 1515 but died without heirs in 1536. The title was created again in 1541 for Robert, second son of James V of Scotland, who died at less than a month old. The fourth creation, along with the Earldom of Ross and Lordship Ardmannoch, was for Mary, Queen of Scots' king consort Lord Darnley, whose son, later James VI of Scotland, I of England and Ireland, inherited the titles on his death. That creation merged with the Scottish crown upon James's ascension. The title, along with the title of Duke of York, with which it has since been traditionally coupled, was created for a fifth time in 1604 for Charles, son of James VI and I. Upon Charles's ascent to the throne in 1625, the title of Duke of Albany merged once again in the crowns.

The title was next granted in 1660 to Charles I's son, James, by Charles II. When James succeeded his elder brother to the throne in 1685, the titles again merged into the crown. The cities of New York and Albany, New York were thus both named after James, as he was the Duke of York and of Albany. The pretender, Charles Edward Stuart, gave the title Duchess of Albany to his illegitimate daughter Charlotte; she died in 1789.

The title "Duke of York and Albany" was granted three times by the Hanoverian kings. 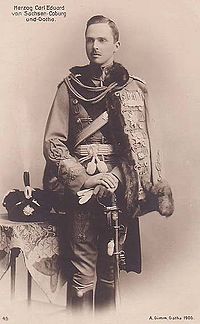 HRH Prince Charles Edward, the last person to hold the title, was deprived thereof in 1919

The title of "Albany" alone was granted for the fifth time, this time in the Peerage of the United Kingdom, in 1881 to Prince Leopold, the fourth son of Queen Victoria. Prince Leopold's son, Prince Charles Edward (who had succeeded as reigning Duke of Saxe-Coburg and Gotha in 1900), was deprived of the peerage in 1919 for bearing arms against the United Kingdom in World War I. Under the Titles Deprivation Act 1917, the legitimate lineal male heir of the 1st Duke of Albany (his senior agnatic descendant is currently the 2nd Duke's great-grandson, Hubertus Prinz von Sachsen-Coburg und Gotha[1]) may petition the British Crown for the restoration of the peerages.

Other titles: Earl of Ross and Lord Ardmannoch (1565)

Dukes of York and Albany

Charlotte was Charles Edward Stuart’s illegitimate daughter by his mistress Clementina Walkinshaw (known as the Countess of Albestroff) and his only child to survive infancy. She was also created a Lady of the Order of the Thistle (LT) by her father on 30 November 1784.

Other titles: Earl of Clarence and Baron Arklow (1881)

Heirs to the dukedom, if restored

The Titles Deprivation Act 1917 allows the lawful successor of a deprived dukedom to petition for its restoration, though no successor to the Duke of Albany has done so. According to straightforward male-line descent, the current claimant is the 2nd Duke's great-grandson[1] by his eldest son. The line of descent is as follows:

The heir apparent to the claim by this line is Hubertus' only son, Sebastian Prinz von Sachsen-Coburg und Gotha (b. 1994).

However, none of the children of the 2nd Duke, being estranged from the British Royal Family due to their German loyalties, asked the British monarch to consent to their marriages. Ordinarily, dukes are not required to obtain royal consent to their marriages, but the Dukes of Albany are descended in the male line from Queen Victoria and thus are subject to the Royal Marriages Act 1772. A strict reading of that act would hold that, even though Johann Leopold's marriage was lawfully contracted in Germany, it is null and void for the purposes of British law. If this is so, then the claim of the Dukedom of Albany passed upon Johann Leopold's death in 1972 to his last surviving brother Friedrich Josias, Prince of Saxe-Coburg and Gotha, and became extinct upon the latter's death in 1998.[2]

It is unclear whether the Albany marriages meet the conditions specified by the Succession to the Crown Act 2013 to be considered valid under its repeal of the Royal Marriages Act, as the matter has not been tested in court and no authorities are known to have commented on the matter.

Dukes of Albany in Fiction