Duke of Bedford (named after Bedford, England) is a title that has been created six times (for five distinct people) in the Peerage of England. The first and second creations came in 1414 in favour of Henry IV's third son, John, who later served as regent of France. He was made Earl of Kendal at the same time and was made Earl of Richmond later the same year. The titles became extinct on his death in 1435. The third creation came in 1470 in favour of George Neville, nephew of Warwick the Kingmaker. He was deprived of the title by Act of Parliament in 1478. The fourth creation came 1478 in favour of George, the third son of Edward IV. He died the following year at the age of two. The fifth creation came in 1485 in favour of Jasper Tudor, half-brother of Henry VI and uncle of Henry VII. He had already been created Earl of Pembroke in 1452. However, as he was a Lancastrian, his title was forfeited between 1461 and 1485 during the predominance of the House of York. He regained the earldom in 1485 when his nephew Henry VII came to the throne and was elevated to the dukedom the same year. He had no legitimate children and the titles became extinct on his death in 1495.

The Russell family currently holds the titles of Earl and Duke of Bedford. John Russell, a close advisor of Henry VIII and Edward VI, was granted the title of Earl of Bedford in 1551, and his descendant William, 5th Earl, was created Duke following the Glorious Revolution.

The subsidiary titles of the Duke of Bedford, all in the Peerage of England, are: Marquess of Tavistock (created 1694), Earl of Bedford (1550), Baron Russell, of Cheneys (1539), Baron Russell of Thornhaugh in the County of Northampton (1603), and Baron Howland, of Streatham in the County of Surrey (1695) (and possibly the Barony of Bedford, which was merged into it in 1138, 1366 or 1414). The courtesy title of the Duke of Bedford's eldest son and heir is Marquess of Tavistock.

The present creation of the dukedom is the seniormost peerage that is not descended from the Royal Family. The family seat is Woburn Abbey, Bedfordshire. The private mausoleum and chapel of the Russell Family and the Dukes of Bedford is at St. Michael’s Church in Chenies, Buckinghamshire (photo).[2] The family owns The Bedford Estate in central London. 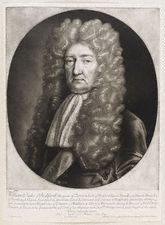 The heir apparent is the present holder's only son Henry Robin Charles Russell, Marquess of Tavistock (b. 2005). 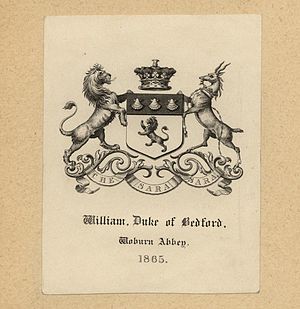 Bookplate showing the coat of arms of the Duke of Bedford

The heraldic blazon for the coat of arms of the Russell dukedom is: Argent, a lion rampant gules; on a chief sable, three escallops of the first.

The chief from these arms is present in the arms of the modern coat of arms of the London Borough of Camden, because the dukes of Bedford used to own land in the present borough.