From Infogalactic: the planetary knowledge core
Jump to: navigation, search
This article is about the title. For the current holder of the title, see Prince William, Duke of Cambridge. 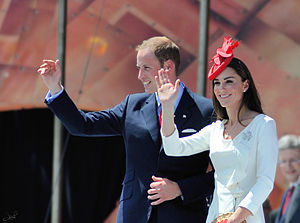 TRH the Duke and Duchess of Cambridge, Prince William and Catherine

The title goes back to the 17th century, and superseded an earlier title of Earl of Cambridge. The title became extinct several times, before being revived after a hiatus of over a hundred years in 2011, when it was bestowed upon Prince William on 29 April 2011 upon his marriage on the same day to Catherine Middleton.

The title was recreated in 1706 and granted to George Augustus, son of George Louis, Hereditary Prince of Hanover and Duke of Brunswick-Lüneburg (who would in 1714 become King George I). When George Augustus ascended to the throne as King George II in 1727, the dukedom merged into the crown and ceased.[1]

The title was again recreated and given, in the Peerage of the United Kingdom, to Prince Adolphus, the seventh son of George III.[2] The title was inherited in 1850 by his only son, Prince George, 2nd Duke of Cambridge, but upon his death in 1904, without a legitimate heir, the title again became extinct.[3]

The grandson (though a female line) of the first Duke of the fourth creation, Adolphus, Duke of Teck, who was the brother of Mary of Teck, George V's wife, was created Marquess of Cambridge (including Earl of Eltham, and Viscount Northallerton) in 1917 when he gave up his German titles and took the surname "Cambridge".[4] Upon the death of the second Marquess without any male heirs, the marquessate became extinct.

During the period leading up to the 1999 wedding of The Prince Edward, the youngest son of Queen Elizabeth II, experts speculated that the dukedom of Cambridge or Sussex were the most likely to be granted to him, and The Sunday Telegraph later reported that Prince Edward was at one point set to be titled Duke of Cambridge.[5] Instead, Prince Edward was created Earl of Wessex, and it was announced that he would eventually be created the next Duke of Edinburgh after his father.[6]

On 29 April 2011, the day of his wedding, it was announced that Prince William was to be created Duke of Cambridge, Earl of Strathearn and Baron Carrickfergus.[1] The letters patent granting these titles received the great seal on 26 May 2011.[7]

The heir apparent to the extant dukedom and the subsidiary titles is the son of Prince William, Prince George of Cambridge (born 2013); but should Prince William become King, the title will again merge with the Crown.