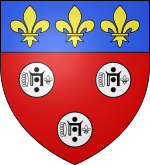 The arms of the town of Chartres in France, the town associated the titles Count and Duke of Chartres

Originally, the Duchy of Chartres (duché de Chartres) was the comté de Chartres, a County. The title of comte de Chartres thus became duc de Chartres. This duchy–peerage was given by Louis XIV of France to his nephew, Philippe II d'Orléans, at his birth in 1674. Philippe II was the younger son and heir of the king's brother, Philippe de France, Duke of Orléans.

The northern portion of the County of Blois, bordering on Normandy, was sometimes alienated as the County of Chartres, but the Counts of Blois who possessed it did not use a separate title for it. In 1391, the death of the only son of Guy II, Count of Blois prompted him to sell the inheritance of the County of Blois to Louis of Valois, Duke of Orléans, merging the title into the royal dukedom.

Married to Luitgarde of Vermandois

Married to Bertha of Burgundy

Married to Adela of Normandy

Theobald V, Count of Blois married his second wife in 1164 to Alix of France and father of:

Margaret, Countess of Blois, married to Gautier to Avesnes, lord of Guise, mother of:

The kings of France installed Vidame of Chartres to administer the city and county. But it seems that the title was given to princes of blood.

Charles de Valois-Alençon (1297 † 1346), count of Alençon and de Chartres, son of Charles of Valois and Margaret of Anjou 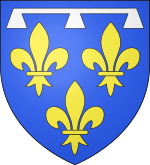 The arms of the House of Orléans.

After its revival and elevation, the title duc de Chartres was used by the House of Orléans, founded by Philippe de France, duc d'Orléans, and cadet branch of the House of Bourbon.

From 1674 until today,the title of 'Duke of Chartres is the eldest son of the 'Duke of Orleans

The title is currently held, as a courtesy title, by