From Infogalactic: the planetary knowledge core
Jump to: navigation, search
For the steamship, see TSS Duke of Cornwall.
For other uses, see Cornwall (disambiguation).

Duke of Cornwall is a title in the Peerage of England, traditionally held by the eldest son of the reigning British monarch, previously the English monarch. The Duchy of Cornwall was the first duchy created in England and was established by royal charter in 1337. The present duke is the Prince of Wales, the eldest son of Queen Elizabeth II. His wife, Camilla, is the current Duchess.

Some folkloric histories of the British Isles, such as Geoffrey of Monmouth's History of the Kings of Britain (1136), claim that the first leader of Cornwall was Corineus, a Trojan warrior and ally of Brutus of Troy, the original settler of the British Isles. From this earliest period through the Arthurian period, the legendary Dukes of Cornwall are semi-autonomous if not independent from the High-King or ruler of Britain, while also serving as his closest ally and, at times, as his protector.[citation needed] According to legend, Gorlois, Duke of Cornwall under King Uther Pendragon, rebelled against the latter's rule when the king became obsessed with Gorlois' wife Igraine. Uther killed Gorlois and took Igraine: the result of their union was the future King Arthur.

The historical record suggests that, following the Anglo-Saxon settlement of Britain, Cornwall formed part of the separate Kingdom of Dumnonia, which included Devon, although there is evidence that it may have had its own rulers at times. The southwest of Britain was gradually incorporated into the emerging Kingdom of England, and after the Norman Conquest in 1066 the new rulers of England appointed their own men as Earl of Cornwall, the first of whom was in fact a Breton of 'Cornwall' in Brittany. Edward, the Black Prince, the eldest son of Edward III, was made the first Duke of Cornwall in 1337. After Edward predeceased the King, the duchy was recreated for his son, the future Richard II. Under a charter of 1421, the duchy passes to the sovereign's eldest son. Cornwall was the first dukedom conferred within the Kingdom of England.[1]

The dukedom of Cornwall can only be held by the oldest living son of the monarch who is also heir apparent. In the event of a Duke of Cornwall's death, the title merges in the Crown even if he left surviving descendants.[citation needed] The monarch's grandson, even if he is the heir apparent, does not succeed to the dukedom. Similarly, no female may ever be Duke of Cornwall, even if she is heir presumptive or heir apparent (that being a distinct and even likely possibility in the future after the passage of the Succession to the Crown Act 2013) to the throne. However, if a Duke of Cornwall should die without descendants and has no elder sister, his next brother obtains the duchy, this brother being both oldest living son and heir apparent.

It is possible for an individual to be Prince of Wales and heir apparent without being Duke of Cornwall. The title "Prince of Wales" is the traditional title of the heir apparent to the throne, granted at the discretion of the Sovereign,[2] and is not restricted to the eldest son.

For example, King George II's heir apparent, the future George III, was Prince of Wales, but not Duke of Cornwall (because he was the King's grandson, not the King's son). When the Sovereign has no legitimate son, the estates of the Duchy of Cornwall revert to the Crown until a legitimate son is born to the Sovereign or until the accession of a new Sovereign who has a son (e.g. between 1547 and 1603) (see more below).

James Francis Edward Stuart, son of James II, was born Duke of Cornwall in 1688. Although his father lost the throne, James Francis Edward was not deprived of his own honours. On a Jacobite perspective, on his father's death in 1701 the duchy of Cornwall was merged in the Crown. On a Hanoverian perspective, it was as a result of his claiming his father's lost thrones that James was attainted for treason on 2 March 1702, and his titles were thus forfeited under English law.[1]

The current Duke of Cornwall

The current Duke of Cornwall is Charles, Prince of Wales, eldest son of Queen Elizabeth II, the reigning monarch. Charles was officially proclaimed Duke of Cornwall at Launceston Castle in 1973. As part of his feudal dues there was a pair of white gloves, gilt spurs and greyhounds, a pound of pepper and cumin, a bow, one hundred silver shillings, wood for his fires, and a salmon spear.

The Duke's second wife, Camilla, whom he married on 9 April 2005 at the Guildhall in Windsor, is the current Duchess of Cornwall. She is also Princess of Wales but does not use that title.[3]

Rights of the duke

Should there be no Duke of Cornwall at any time, the income of the Duchy goes to the Crown. The Duchy includes over 570 square kilometres of land, more than half of which lies in Devon. The Duke also has some rights over the territory of Cornwall, the county, and for this and other reasons there is debate as to the constitutional status of Cornwall. The High Sheriff of Cornwall is appointed by the Duke, not the monarch, in contrast to the other counties of England and Wales. The Duke has the right to the estates of all those who die without named heirs (bona vacantia) in the whole of Cornwall. In 2013, the Duchy had a revenue surplus of ₤19 million, a sum that was exempt from income tax, though the Prince of Wales chose to pay the tax voluntarily.[4] Since the passing into law of the Sovereign Grant Act 2011, revenues of the Duchy of Cornwall pass to the heir to the throne, regardless of whether that heir is the Duke of Cornwall. In the event that the heir is a minor, 10% of the revenues pass to the heir, with the balance passing to the Crown.[5] 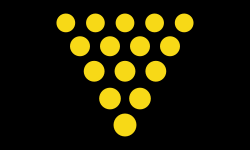 Banner of the Duke of Cornwall

The Arms of the Duke of Cornwall are sable, fifteen bezants, that is, a black field bearing fifteen golden discs. The arms are now used as a badge by the Prince of Wales, and they appear below the shield in his coat of arms, along with his other badges.

The arms were adopted late in the 15th century, based on the arms of Richard, Earl of Cornwall. The bezants in Richard's arms were intended to represent peas, known in French as pois, as a punning reference to the French region of Poitou, of which he was count.[6]

The arms are sometimes shown surmounted by the Prince of Wales' coronet, which consists of four crosses patée and four fleurs-de-lis with an arch. The crest is a Cornish chough, and Cornish choughs holding ostrich feathers are found as supporters. The motto used with the arm is Houmout, meaning "high-spirited", the personal motto of the Black Prince.

Traditionally Cornish people refer to the Duke of Cornwall in the Loyal Toast, much like the Duke of Normandy in the Channel Islands.[7]

When his heir apparent Edward of Woodstock, Prince of Wales and Duke of Cornwall predeceased him, Edward III granted Woodstock's son Richard a new creation of the title Duke of Cornwall. When Richard acceded the throne as Richard II in 1377, this creation merged to the crown.

also Prince of Wales and Earl of Chester (1376)

When Richard Duke of York pressed his claim to the throne, he was made heir apparent to Henry VI by the Act of Accord. On 31 October 1460, he was made Prince of Wales and Earl of Chester, Duke of Cornwall and Lord Protector of England by act of parliament. Since he was not the eldest living son of the monarch, this creation was outside the terms of the 1337 warrant; York died in battle on 30 December 1460.