From Infogalactic: the planetary knowledge core
Jump to: navigation, search
This article is about the title. For the present holder, see Prince Philip, Duke of Edinburgh.
For the award programme, see Duke of Edinburgh's Award. 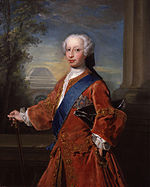 Duke of Edinburgh, named after the city of Edinburgh, Scotland, is a title that has been created four times for members of the British royal family since 1726. The current holder is the Prince Philip, consort to Queen Elizabeth II. 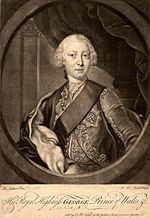 Prince George was the second Duke of Edinburgh, before he became George III.

Dukes of Gloucester and Edinburgh

On 19 November 1764, George III created a variation of the title for his younger brother, Prince William, the full form being "Duke of Gloucester and Edinburgh". This title was in the Peerage of Great Britain and the sole subsidiary title of the dukedom was Earl of Connaught, in the Kingdom of Ireland, a title in the Peerage of Ireland.[7] In 1805, the titles were inherited by William's only son, another William, who died without a male heir, causing the title to cease to exist.

Queen Victoria re-created the title on 24 May 1866 for her second son Prince Alfred, this time in the Peerage of the United Kingdom. The subsidiary titles of the dukedom were Earl of Kent and Earl of Ulster, also in the Peerage of the United Kingdom.[8] When Alfred became the sovereign of the two German duchies Saxe-Coburg and Saxe-Gotha in 1893, he retained his British titles. His only son Alfred, Hereditary Prince of Saxe-Coburg and Gotha committed suicide in 1899, so the title Duke of Edinburgh again became extinct upon the elder Alfred's death in 1900.

The title was created for a fourth time on 19 November 1947 by King George VI, who bestowed it on his son-in-law Lieutenant Philip Mountbatten, when he married Princess Elizabeth. Subsequently, Elizabeth was primarily known as HRH Princess Elizabeth, Duchess of Edinburgh until she became Queen in 1952. The subsidiary titles of the dukedom were Earl of Merioneth and Baron Greenwich, of Greenwich in the County of London. Like the dukedom, these titles were also in the Peerage of the United Kingdom.[9] Earlier that year, Philip had renounced his Greek and Danish royal titles (he was born a Prince of Greece and Denmark, being a male-line grandson of King George I of Greece and male-line great-grandson of King Christian IX of Denmark) along with his rights to the Greek throne. In 1957, Philip became a Prince of the United Kingdom.[10]

It was announced in 1999, at the time of the wedding of Prince Edward, Earl of Wessex, that he would follow his father as Duke of Edinburgh. This is unlikely to happen by direct inheritance, as Prince Edward is the youngest of Prince Philip's three sons. Rather, the title is expected to be newly created for Prince Edward after it "eventually reverts to the crown"[11] after "both the death of the current Duke of Edinburgh and the Prince of Wales' succession as King."[12]