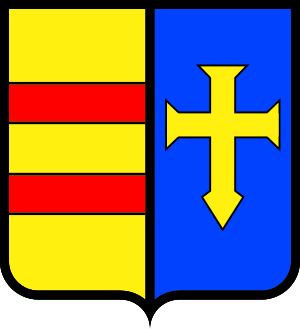 Coat of arms of the House of Holstein-Gottorp

The formal title adopted by these rulers was "Duke of Schleswig, Holstein, Dithmarschen and Stormarn", but that title was also used by his kinsmen, the kings of Denmark and their cadet branches, as it was the common property of all these agnates. The Gottorp branch held Landeshoheit (sovereignty) over the duchy of Holstein in the Holy Roman Empire and over the duchy of Schleswig in the kingdom of Denmark.[citation needed] The name Holstein-Gottorp is for the sake of convenience used instead of the technically more correct "Duke of Schleswig and Holstein in/at Gottorp".[citation needed]

The oldest of the ducal titles was that of Schleswig, which had been confirmed in fief to a royal kinsman by the regent Queen Margaret I of Denmark, Sweden and Norway on behalf of her son Olaf II of Denmark in 1386. The kings of Denmark were granted Holstein as an imperial fief by the Holy Roman Emperor Frederick III from 1474. 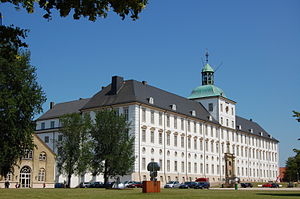 Gottorf Castle, after which the house of Holstein-Gottorp is named

By the Treaty of Roskilde (1658) and the Treaty of Copenhagen (1660), Denmark released Gottorp from its feudal bonds and recognized the sovereignty of its dukes over the Gottorp portions of the duchy of Schleswig. In fact, these Schleswigers had been relatively independent already for more than a century. Although the duchy of Holstein remained officially a fief of the Empire, in fact by treaty its dukes co-governed both duchies with their formal overlord, the Danish king.

In the Great Northern War the duchy sided with Sweden and was defeated after Danish troops occupied the northern portions of Holstein-Gottorp. According to the 1720 Treaty of Frederiksborg Swedish support for Gottorp ceased, making it impossible for the dukes to regain their lost territories in Schleswig and prolonging their feud with the king of Denmark. Following the peace settlement of 1721, Duke Charles Frederick fled to the court of Peter the Great of Russia, and for some time the Russians intrigued to restore Charles Frederick to his lands in Schleswig. Charles Frederick himself was married to Grand Duchess Anna, Peter's daughter. Peter's successors abandoned his policy of backing the claims of the dukes of Holstein-Gottorp. But from this marriage was born Charles Peter Ulrich, who succeeded to Holstein-Gottorp in 1739, and became heir to the Russian throne upon the accession of his childless aunt Elizabeth in 1741.

Charles Peter Ulrich, who acceded to the Russian throne as Peter III in 1762, was determined to conquer Schleswig and Holstein from Denmark–Norway. When he became emperor in 1762, he immediately signed a generous peace with Prussia and withdrew Russia from the Seven Years' War in order to concentrate fully on an attack upon Denmark. This move angered Russian opinion, since it was considered a betrayal of Russia's sacrifices in the war, as well as placing national interests in jeopardy. At the same time, the Danish army had hastily moved across the border into Mecklenburg, to avoid an invasion of Holstein, and prepared for battle. The two armies stood less than 30 kilometres apart when news from Saint Petersburg suddenly reached the Russian army that Russia's emperor had been overthrown by his wife, who had now acceded to the throne as Empress Catherine II. One of her first actions was to call off the war against Denmark and restore normal relations.

Peter III's son, Paul, the new Duke of Holstein-Gottorp, was a minor under the regency of his mother, the empress. In 1773 she agreed to cede the territorial claims of her son to the Holstein-Gottorp lands still held by Denmark, obtaining in exchange the German countships of Oldenburg and Delmenhorst, elevated in 1776 into the duchy of Oldenburg within the Holy Roman Empire. The duchy was given to Paul's grandfather's cousin, the aged Prince-Bishop of Lübeck, head of a younger branch of the Holstein-Gottorp family. This put an end to the Gottorp question, which had generated so many conflicts between the Nordic powers.

The House of Holstein-Gottorp acceded to several European thrones. The dynastic policy of the dukes of Holstein-Gottorp resulted in its cadet branch, the Swedish line, ruling Sweden from 1751 until 1818 and Norway from 1814 to 1818. In 1863, the related House of Schleswig-Holstein-Sonderburg-Glücksburg — descended from King Christian III of Denmark — became Kings of Denmark and Greece and, in 1905, of Norway. 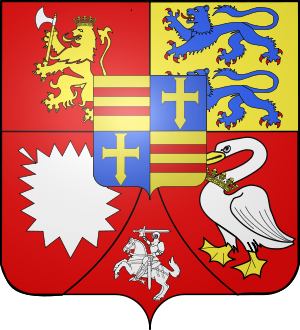 Coat of arms of Count Adolf of Holstein-Gottorp 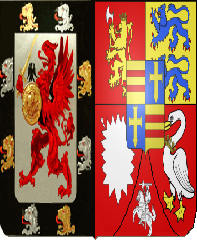 Coat of Arms of the House of Holstein-Gottorp-Romanov

Dukes of Schleswig and Holstein at Gottorp:

Dukes of Holstein-Gottorp at Kiel:

One view[2] is that the heir is the non-dynastic son of Grand Duke Dimitri, only son of Grand Duke Paul, himself the youngest brother of Alexander III. This heir is non-dynastic in the Russian sense, but the Danish branch of the House of Oldenburg had no declared ban against unequal marriages, and Schleswig, where the (once sovereign) Schloss Gottorf is located, was never part of Holy Roman Empire or under its jurisdiction. These heirs live in USA and have not staked a public claim to titles.

Another view determines that Nicholas II's August 11, 1903 renunciation of claims to the Oldenburg titles and duchy for himself and for all his family and descendants [3] made it impossible for any of the Romanov heirs to bear the dynastically valid Schleswig Holstein titles independently.

A third view is that by the end of the Holy Roman Empire it was a principle of German princely law that members of all princely families which held Reichsstand status therein were required to contract ebenbürtig in order to transmit dynastic rights to their descendants.[4] If descendants of Grand Duke Dmitri's marriage with Audrey Emery are considered ineligible to succeed to the ducal Holstein claim, it is unclear which, if any, of the various male-line branches descended from the Imperial Romanovs remain eligible. If marriages-in-exile with Russian princesses or countesses meet the marital standard, male-line heirs may yet exist. If, however, all marriages deemed morganatic by Russian Imperial standards were also non-dynastic for the Gottorp succession, the genealogically senior Holstein-Gottorp dynast would be Anton-Günther, Duke of Oldenburg, current head of the branch descending from Christian August of Holstein-Gottorp, Prince of Eutin, the younger brother of Duke Frederick IV. He already holds claim to the defunct title af grand duke of Oldenburg. Either way, the king of Denmark exercised sovereignty in the duchies and provided financial support to the cadet Schleswig-Holstein branches of the House of Oldenburg. The claim to Holstein inherited by Emperor Paul I from Peter II was exchanged in 1773 for the Danish kings' duchy of Oldenburg (residual succession rights being retained), the rulers of which lost sovereignty there in 1918. King Christian IX of Denmark lost Schleswig and Holstein in the Second Schleswig War in 1864, subsequent to which both duchies were incorporated into the kingdom of Prussia and later the German Empire. Danish monarchs continued to use their traditional ducal titles in pretence until the death of king Frederick IX of Denmark in 1972. In 1920, Northern Schleswig was returned to Danish rule after a plebiscite, the remainder of the former duchies remains part of Germany.