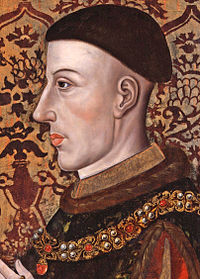 Henry, Prince of Wales, was the last person to hold the title before it merged in the crown on his accession as Henry V.

There were several Dukes of Lancaster in the 14th and early 15th centuries. See also Duchy of Lancaster.

There were three creations of the Dukedom of Lancaster.

The first creation was on 6 March 1351, for Henry of Grosmont, 4th Earl of Lancaster, a great-grandson of Henry III; he was also 4th Earl of Leicester, 1st Earl of Derby, 1st Earl of Lincoln and Lord of Bowland. He died in 1361 and the peerage expired.

The second creation was on 13 November 1362, for John of Gaunt, 1st Earl of Richmond, who was both the 1st Duke's son-in-law and also fourth son of King Edward III. John had married Blanche of Lancaster, 6th Countess of Lancaster, daughter of Henry Grosmont and heiress to his estates. When John of Gaunt, the 1st Duke of this creation died on 4 February 1399, the Dukedom passed to his son, Henry of Bolingbroke, 1st Duke of Hereford. Later that same year, the new 2nd Duke usurped the throne of England from Richard II, ascending the throne as Henry IV, at which point the Dukedom merged in the crown.

The third creation was on 10 November 1399, for Henry of Monmouth, Prince of Wales, eldest son of the new king. In 1413, the 1st Duke ascended the throne as King Henry V, and the Dukedom merged in the crown again.

The Duchy of Lancaster continues to exist as a separate entity from the Crown Estate and currently provides income for the British monarch.

It is customary at formal dinners in Lancashire and in Lancastrian regiments of the armed forces for the Loyal Toast to the crown to be announced as "The Queen, Duke of Lancaster." In addition, in Lancaster it was quite common as late as the second half of the twentieth century to hear the national anthem sung as "God save our gracious Queen, long live our noble Duke," but this is a tradition that has no constitutional warrant, and the British monarch is not styled legally so within either the County Palatine of Lancashire nor the Duchy of Lancaster in any official capacity (for example, Letters Patent or Acts of Parliament), merely as a sign of local, 'Lancastrian' loyalty.