From Infogalactic: the planetary knowledge core
(Redirected from Duke of Monmouth)
Jump to: navigation, search

James Scott, 1st Duke of Monmouth, 1st Duke of Buccleuch KG PC (9 April 1649 – 15 July 1685), was an English nobleman. Originally called James Crofts or James Fitzroy, he was born in Rotterdam in the Netherlands, the eldest illegitimate son of Charles II of England, Scotland and Ireland and his mistress, Lucy Walter.

In 1685 he led the unsuccessful Monmouth Rebellion, an attempt to depose his uncle, King James II and VII. After one of his officers declared Monmouth the legitimate King in the town of Taunton in Somerset, Monmouth attempted to capitalise on his position as the son of Charles II, and his Protestantism, in opposition to James, who was a Roman Catholic. The rebellion failed, and Monmouth was beheaded for treason on 15 July 1685.

Born in Rotterdam in the Netherlands, to Lucy Walter, and her lover, Charles II (who was living in continental exile following his father's execution), James spent his early life in Schiedam.[1]

According to biographical research by Hugh Noel Williams (1870–1925), Charles had not arrived at The Hague until the middle of September 1648 – seven months before the child's birth (but he met Lucy for the first time nine months before) — and some unfounded voices whispered that Lucy Walter had in the summer of 1648 been mistress of Colonel Robert Sidney, a younger son of the Earl of Leicester.[2] When the child grew to manhood, contemporaries observed that he bore a strong resemblance to Sidney.[1] The unfounded voices had probably originated from the Duke of York, brother of King Charles II, who was afraid of his nephew's potential claim to the throne.[1]

Finally, in 2012, a DNA test conducted on Monmouth's descendant, the 10th Duke of Buccleuch, showed that he shared the same Y chromosome (inherited from father-to-son) as a distant Stuart cousin, providing strong evidence that Charles II was Monmouth's biological father after all.[3] He had a younger sister Mary Crofts, who may also have been a daughter of Charles although Theobald Taaffe, 1st Earl of Carlingford is considered another potential father. Mary married the Irishman William Sarsfield and was a sister-in-law of the Jacobite general Patrick Sarsfield.[4]

As an illegitimate son, James was not eligible to succeed to the English or Scottish thrones, though there were rumours that Charles and Lucy did marry secretly.[5] Monmouth later himself always claimed his parents were married and that he possessed their marriage lines, but he never produced them.[6] Charles, as King, later testified in writing to his Council that he had never been married to anyone except his queen, Catherine of Braganza.[7]

In March 1658, young James was kidnapped by one of the King's men, sent to Paris, and placed in the care of the Crofts baronets, whose surname he took. He briefly attended a school in Familly.[1] 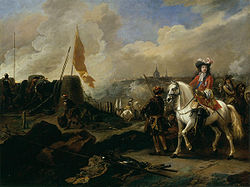 James Scott commanding the English against the Dutch in 1672, by Jan Wyck

On 14 February 1663, at the age of 14, shortly after having been brought to England, James was created Duke of Monmouth, with the subsidiary titles of Earl of Doncaster and Baron Scott of Tynedale, all three in the Peerage of England, and on 28 March 1663 he was appointed a Knight of the Garter.

On 20 April 1663, he was married to the heiress Anne Scott, 4th Countess of Buccleuch. James took his wife's surname upon marriage.[6] The day after his marriage, the couple were made Duke and Duchess of Buccleuch, Earl and Countess of Dalkeith, and Lord and Lady Scott of Whitchester and Eskdale in the Peerage of Scotland.[8] Monmouth, as he became known, was popular, particularly since he was a Protestant, whereas the official heir presumptive to the throne, the King's brother James, Duke of York, had openly converted to Roman Catholicism.[1]

In 1665, at the age of 16, Monmouth served in the English fleet under his uncle the Duke of York in the Second Anglo-Dutch War.[1] In June 1666, he returned to England to become captain of a troop of cavalry.[1] On 16 September 1668 he was made colonel of the His Majesty's Own Troop of Horse Guards.[1] He acquired Moor Park in Hertfordshire in April 1670.[9] At the outbreak of the Third Anglo-Dutch War in 1672, a brigade of 6,000 English and Scottish troops was sent to serve as part of the French army (in return for money paid to King Charles), with Monmouth as its commander.[1] He became Lord Lieutenant of the East Riding of Yorkshire and Governor of Kingston-upon-Hull in April 1673.[1] In the campaign of 1673 and in particular at the Siege of Maastricht in June 1673, Monmouth gained a considerable reputation as one of Britain's finest soldiers.[1] He was reported to be replacing Marshal Schomberg as commander of England's Zealand Expedition, but this did not happen.[10]

In 1674 Monmouth became Chancellor of Cambridge University[11] and Master of the Horse and King Charles II directed that all military orders should be brought first to Monmouth for examination so giving him effective command of the forces; his responsibilities included the movement of troops and the suppression of riots.[1] In March 1677 he also became Lord Lieutenant of Staffordshire.[1]

In 1678 Monmouth was commander of the Anglo-Dutch brigade, now fighting for the United Provinces against the French and he distinguished himself at the Battle of St Denis in August 1678 during the Franco-Dutch War, further increasing his reputation.[12] The following year, after his return to Britain, he commanded the small army raised to put down the rebellion of the Scottish Covenanters and despite being heavily outnumbered, he decisively defeated the (admittedly poorly equipped) Covenanter rebels at the Battle of Bothwell Bridge on 22 June 1679.[1]

As his popularity with the masses increased Monmouth was obliged to go into exile in the Dutch United Provinces in September 1679.[1] Following the discovery of the so-called Rye House Plot in 1683, Monmouth was identified as a conspirator.[13] On King Charles II's death in February 1685 Monmouth led the Monmouth Rebellion, landing with three ships at Lyme Regis in Dorset in early June 1685 in an attempt to take the throne from his uncle.[14] He published a "Declaration for the defence and vindication of the protestant religion and of the laws, rights and priviledges of England from the invasion made upon them, and for delivering the Kingdom from the usurpation and tyranny of us by the name of James, Duke of York": King James II and VII responded by issuing an order for the publishers and distributors of the paper to be arrested.[15]

Monmouth declared himself King at various places along the route including Axminster, Chard,[16] Ilminster and Taunton.[1] On 6 July 1685 the two armies met at the Battle of Sedgemoor, the last clear-cut pitched battle on open ground between two military forces fought on English soil: Monmouth's makeshift force could not compete with the regular army, and was soundly defeated.[17] Monmouth himself was captured and arrested at Ringwood in Hampshire.[18]

James took the unusual step of allowing his nephew an audience, despite having no intention of extending a pardon to him. The prisoner unsuccessfully implored his mercy, and even offered to convert to Catholicism, but to no avail. He was executed by Jack Ketch on 15 July 1685, on Tower Hill.[21] Shortly beforehand, Bishops Turner of Ely and Ken of Bath and Wells visited the condemned man to prepare him for eternity, but withheld the Eucharist as he refused to acknowledge that either his rebellion or his relationship with Lady Wentworth had been sinful.[22] It is said that before laying his head to the block Monmouth specifically bade Ketch finish him at one blow, saying he had mauled others before. Disconcerted, Ketch did indeed inflict multiple blows with his axe, the prisoner rising up reproachfully the while - a ghastly sight that shocked the witnesses, drawing forth execrations and groans. Some say a knife was at last employed to sever the head from the twitching body. Sources vary; some claim eight blows, the official Tower of London fact sheet says it took five blows,[23] while Charles Spencer, in his book Blenheim, states it at seven.[24]

His Dukedom of Monmouth was forfeited, but the subsidiary titles of that dukedom (Earl of Doncaster and Baron Scott of Tindale) were restored to his grandson, Francis Scott, 2nd Duke of Buccleuch (1695–1751), on 23 March 1743.[25]

According to legend, a portrait was painted of Monmouth after his execution: the tradition states that it was realised after the execution that there was no official portrait of the Duke – so his body was exhumed, the head stitched back on the body, and it was sat for its portrait to be painted.[26] However, there are at least two formal portraits of Monmouth tentatively dated to before his death currently in the National Portrait Gallery in London,[27] and another painting once identified with Monmouth that shows a sleeping or dead man that could have given rise to the story.[28]

One of the many theories about the identity of The Man in the Iron Mask is that he was Monmouth: this seems to be based on the unlikely reasoning that James II would not execute his own nephew, so someone else was executed, and James II arranged for Monmouth to be taken to France and put in the custody of his cousin Louis XIV of France.[29] 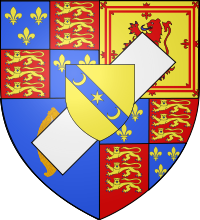 Coat of Arms of the 1st Duke of Monmouth and Buccleuch: The royal arms of King Charles II differenced with a baton sinister argent overall an inescutcheon of pretence of Scott (Or, on a bend azure a mullet of six points between two crescents of the field).

His marriage to Anne Scott, 1st Duchess of Buccleuch resulted in the birth of six children:[8]

His affair with his mistress Eleanor Needham, daughter of Sir Robert Needham of Lambeth resulted in the birth of three children:[8]

Toward the end of his life he conducted an affair with Henrietta, Baroness Wentworth.[8]