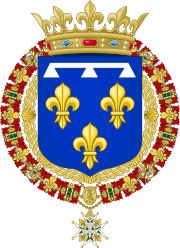 Duke of Orléans (French: Duc d'Orléans) was a title reserved for French royalty, first created in 1344 by Philip VI in favor of his son Philip of Valois.[1] Known as princes of the blood (princes du sang), the title of Duke of Orléans was given, when available, to the oldest brother of the king. Thus, they formed a collateral line of the French royal family, with an eventual right to succeed to the throne should more senior princes of the blood die out.

During the period of the ancien régime the holder of the title often assumed a political role. The Orléans branch of the House of Valois came to the throne with Louis XII (15th century). Louis Philippe II, fifth Duke of Orléans, contributed to the destruction of the ancient regime. At the head of a retrospectively named 'Orleanist' faction centred on the Palais Royal, he contested the authority of his cousin Louis XVI in the adjacent Louvre. His son would eventually ascend the throne in 1830 following the July Revolution as Louis-Philippe I, King of the French. The descendants of the family are the Orléanist pretenders to the French throne, and the title has been used by several members of the House. The holder of the title held the style of Serene Highness.

At the death of Nicholas Henri, his younger brother Gaston was given the title of Orléans but was not officially allowed to be styled as the Duke of Orléans until his marriage with the heiress Marie de Bourbon, Duchess de Montpensier in her own right (she had been betrothed to Nicholas at the age of 3). They were the parents of Anne Marie Louise of Orléans, Duchess of Montpensier. At her death in 1693, much of her vast wealth went to her cousin, Philippe I, Duke of Orléans.

Upon the death of Gaston of Orléans, the appanage of Orléans reverted to the crown and was given to Philippe de France, the brother of Louis XIV of France. As the king's eldest brother he was known at court as Monsieur.

Philippe and his second wife, the famous court writer Elizabeth Charlotte of the Palatinate, founded the modern House of Orléans. Their surviving son Philippe d'Orléans was the regent for the child king Louis XV.

The first two dukes were addressed as Royal Highness (Altesse royale); their successors had the style Serene Highness. After 1709, the dukes of Orléans were the First Princes of the Blood – this meant that they could be addressed as Monsieur le Prince, and were in line to the throne of France after the descendants of Louis XIV.