From Infogalactic: the planetary knowledge core
(Redirected from Duke of Portland)
Jump to: navigation, search
This article is about the title in the Peerage of England. For the whaler, see Duke of Portland (whaler). For the British Prime Minister, see William Cavendish-Bentinck, 3rd Duke of Portland. 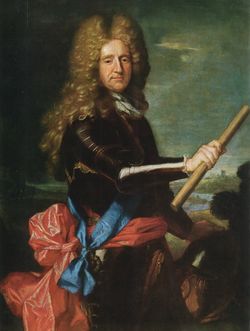 Earl of Portland is a title that has been created twice in the Peerage of England, first in 1633 and again in 1689. The title Duke of Portland was created in 1716 but became extinct in 1990 upon the death of the ninth Duke.

The title of Earl of Portland was first created for the politician Richard Weston, 1st Baron Weston, in 1633.[1] He was Chancellor of the Exchequer from 1621 to 1628 and Lord High Treasurer from 1628 to 1635, and had already been created Baron Weston, of Neyland in the County of Suffolk, in 1628. This title was also in the Peerage of England. He was succeeded by his son, the second Earl. He served as Joint Lord Lieutenant of Hampshire. His son, the third Earl, was killed at the Battle of Lowestoft in 1665. He was unmarried and was succeeded by his uncle, the fourth Earl. He was childless and on his death in 1688 the titles became extinct.

The title was created for a second time in 1689 in favour of William Bentinck, the Dutch favourite and close advisor of King William III. He was made Baron Cirencester and Viscount Woodstock at the same time he was given the earldom, also in the Peerage of England. He was succeeded in 1709 by his son from his first marriage, Henry, the second Earl of Portland. He represented Southampton and Hampshire in the House of Commons. In 1716 he was created Marquess of Titchfield and Duke of Portland in the Peerage of Great Britain. His grandson, William Cavendish-Bentinck, 3rd Duke of Portland was a noted politician. He was Prime Minister in 1783 and from 1807 to 1809 and also served as Home Secretary and as Lord President of the Council. In 1801 he assumed by Royal licence the additional surname of Cavendish. Portland was the husband of Lady Dorothy Cavendish, daughter of William Cavendish, 4th Duke of Devonshire, and was a descendant on his mother's side of Henry Cavendish, 2nd Duke of Newcastle-upon-Tyne.

The third Duke was succeeded by his eldest son William Bentinck, 4th Duke of Portland. The fourth Duke was also a politician and served as Lord Privy Seal in 1827 and as Lord President of the Council from 1827 to 1828. He married Henrietta, daughter of Major-General John Scott in 1795, and assumed by Royal licence the same year the additional surname of Scott in the manner of Cavendish-Bentinck. His eldest son and heir apparent, William Cavendish-Scott-Bentinck, Marquess of Titchfield, represented two constituencies in Parliament but died unmarried in 1824, 15 years before his father. Portland was therefore succeeded by his second son, William Cavendish-Scott-Bentinck, 5th Duke of Portland. The fifth Duke is remembered as a capable architect and engineer but eccentric,[citation needed] who excavated an underground art gallery and library under his estate at Welbeck Abbey.

The eighth Duke was childless and succeeded by his younger brother, Victor Cavendish-Bentinck, 9th Duke of Portland. He was a diplomat and served as Ambassador to Poland. The ninth Duke's only son, William James Cavendish-Bentinck (1925–1966), predeceased him, childless, and on Portland's death in 1990 at the age of 93 the marquessate of Titchfield and the dukedom of Portland became extinct.

The Duke was succeeded in his remaining titles by his sixth cousin Henry Bentinck, 11th Earl of Portland. He was the great-great-great-great-grandson of William Bentinck, 1st Graf Bentinck (1704–1774), eldest son of the first Earl from his second marriage, who had been created a Count of the Holy Roman Empire in 1732 (with a Royal Licence of 1886 to use the title in England). Since Henry's death in 1997, the titles are held by his only son, Timothy Bentinck, 12th Earl of Portland, who is also Count Bentinck of the Holy Roman Empire. The 12th earl is an actor known by his professional name Timothy Bentinck.

Other members of the Cavendish-Bentinck family

In 1732 the title Count (Graf) Bentinck, of the Holy Roman Empire, was created by Emperor Charles VI for William Bentinck, Baron Bentinck in the Duchy of Guelders and second surviving son of Hans Willem Bentinck, 1st Earl of Portland.

The 5th Graf Bentinck renounced the title Graf Bentinck and so his younger brother William became 6th Graf Bentinck. However a Royal Licence of 1886 was created which allowed the 5th Graf the use of this renounced title in England. The title is inherited in male primogeniture line by the descendents of William Bentinck. Already the 7th Count Bentinck since 1932, Henry Bentinck became also the 11th Earl of Portland in 1990. After his death in 1997, the titles are currently held by the actor Tim Bentinck.