Duke of Sussex was a title in the Peerage of the United Kingdom. It was conferred on 27 November 1801 upon The Prince Augustus Frederick, the sixth son of George III. He was made Baron Arklow and Earl of Inverness, at the same time, also in the Peerage of the United Kingdom. Since he had no legitimate issue, the titles became extinct on his death in 1843.

In 1999, during the time leading up to the wedding of The Prince Edward, the youngest son of Elizabeth II, experts had suggested the Dukedom of Sussex or Cambridge as the most likely to be granted to him. Instead, Prince Edward was created Earl of Wessex, and it was announced that he would eventually be created Duke of Edinburgh, a title currently held by his father.[1] There was again speculation that Prince William of Wales might be given the title upon his April 2011 wedding to Catherine Middleton,[2] but he was instead created Duke of Cambridge. In the same year, Prince Harry was reported as a potential recipient of the title.[3] 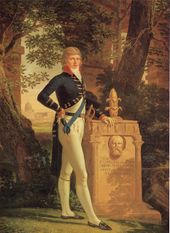