From Infogalactic: the planetary knowledge core
Jump to: navigation, search
For other uses, see Duke of Victoria (disambiguation). 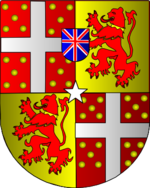 Coat of arms of the British Dukes of Wellington, also Dukes of Victoria

The title was created by Prince Regent John of Portugal (later King John VI) on 18 December 1812 to honour the British General Arthur Wellesley, who was the general commander of the armies that eventually defeated the troops of Emperor Napoleon I of France in the Peninsular War. It is the only time that a Portuguese dukedom was granted to a foreigner.[citation needed]

Arthur Wellesley had already received the Portuguese titles Conde de Vimeiro (Count of Vimeiro, 18 October 1811) and Marquês de Torres Vedras (Marquis of Torres Vedras, August 1812), which became subsidiary titles to that of Duque da Vitória. He also received the British peerage title Duke of Wellington, that in addition to other titles and honours from the United Kingdom, Spain and Netherlands. All these titles were passed to his heirs until the present day.[citation needed]

Dukes of Victoria since 1812