From Infogalactic: the planetary knowledge core
Jump to: navigation, search
For the General and Prime Minister, see Arthur Wellesley, 1st Duke of Wellington.

Duke of Wellington is a hereditary title of the senior rank in the Peerage of the United Kingdom. It derived from Wellington in Somerset, and was created for Arthur Wellesley, 1st Marquess of Wellington (born The Hon. Arthur Wesley) (1769–1852), the Anglo-Irish Army leader and twice British Prime Minister. Unclear references to "the Duke of Wellington" generally refer to the 1st Duke of Wellington unless the context suggests a later date. He led the decisive victory with Gebhard Leberecht von Blücher over Napoleon Bonaparte's forces at Waterloo in Brabant (now Walloon Brabant, Belgium).

The first duke's father was created the 1st Earl of Mornington and their male-line ancestors were wealthy agricultural and urban landowners in both countries, among the Anglo-Irish Protestant Ascendancy.

The dukedom has descended to heirs male of the body with 11 other titles in various jurisdictions.

The titles of Duke of Wellington and Marquess of Douro were bestowed upon Arthur Wellesley, 1st Marquess of Wellington, on 11 May 1814 after he returned home a hero following Napoleon's abdication. He fought some 60 battles in his military career, and never lost a single one. He was considered 'the conqueror of Napoleon'. He stands as one of the two finest soldiers Britain has ever produced, the other being the Duke of Marlborough.

Apart from the British titles the Dukes of Wellington also hold the titles of Prince of Waterloo (Prins van Waterloo, 1815) of the Kingdom of the Netherlands, Duke of Ciudad Rodrigo (Duque de Ciudad Rodrigo, 1812) of the Kingdom of Spain, and Duke of Victoria (Duque da Vitória, 1812), with the subsidiary titles Marquess of Torres Vedras (Marquês de Torres Vedras, 1812) and Count of Vimeiro (Conde de Vimeiro, 1811) of the Kingdom of Portugal. These were granted to the first Duke as victory titles for his distinguished services as victorious commanding general in the Peninsular War (in Spain and Portugal) and at the Battle of Waterloo (in what is now Belgium).

The family seat is Stratfield Saye House, near Basingstoke, Hampshire. Apsley House, in London, is now owned by English Heritage, although the family retain an apartment there. 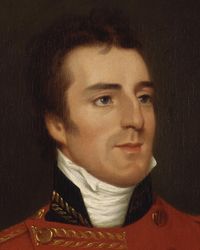 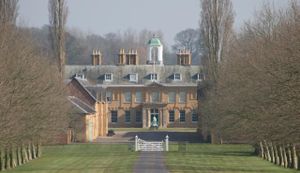 Should the direct male line of succession from the first Duke of Wellington become extinct, the dukedom and its subsidiary titles in the British peerage will become extinct, as will the titles of Prince of Waterloo in the Dutch peerage and the dukedom of the Victory and its subsidiary titles in the Portuguese peerage. The dukedom of Ciudad Rodrigo in the Spanish peerage, together with its subsidiary titles, will continue to be held in the female line of descendants of the first Duke. The earldom and barony of Mornington, along with the viscountcy of Wellesley, which are all titles in the Irish peerage, will revert to the line of the Earl Cowley, a male-line descendant of a younger brother of the first Duke of Wellington.