The Duke of Westminster's seat is at Eaton Hall, Cheshire. The traditional burial place of the Dukes is the Old Churchyard adjacent to St Mary's Church, Eccleston.

History of the Grosvenor family

The subsidiary titles are: Marquess of Westminster (created 1831), Earl Grosvenor (1784), Viscount Belgrave, of Belgrave in the County of Chester (1784), and Baron Grosvenor, of Eaton in the County of Chester (1761). The Dukedom and Marquessate are in the Peerage of the United Kingdom; the rest are in the Peerage of Great Britain. The courtesy title of the eldest son and heir to the Duke is Earl Grosvenor. 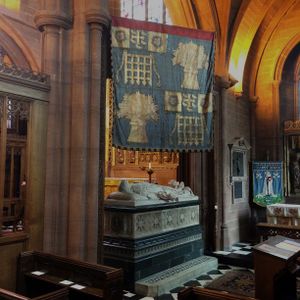 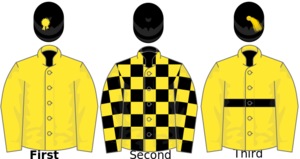 Jockey Colours of Duke of Westminster

The heir apparent is the present holder's only son, Hugh, Earl Grosvenor (b. 29 January 1991). Lord Grosvenor is currently the only person in the line of succession to the dukedom of Westminster. The next in line to the marquessate and the other titles is Francis Grosvenor, 8th Earl of Wilton, who is heir male of Robert Grosvenor, 1st Baron Ebury, himself third and youngest son of the 1st Marquess.