From Infogalactic: the planetary knowledge core
(Redirected from Dukes of Devonshire)
Jump to: navigation, search

Duke of Devonshire is a title in the Peerage of England held by members of the Cavendish family. This branch of the Cavendish family has been one of the richest and most influential aristocratic families in England since the 16th century, and has been rivalled in political influence perhaps only by the Marquesses of Salisbury and the Earls of Derby.

Although in modern usage the county of Devon is now rarely called 'Devonshire', the title remained 'Duke of Devonshire'. Despite the title of the dukedom and the subsidiary title, the earldom of Devonshire, the family estates are centred in Derbyshire. It should not be confused with the earlier title, Earl of Devon.

Cavendish knights, and the 1st Earl of Devonshire 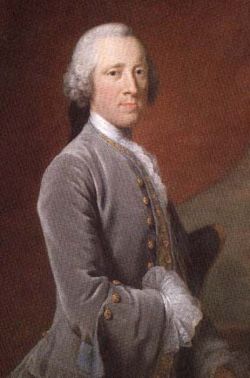 The Cavendish family descends from Sir John Cavendish, who took his name from the village of Cavendish, Suffolk, where he held an estate in the 14th century. He served as Chief Justice of the King's Bench from 1372 to 1381, and was killed in the Peasants' Revolt. Two of his great-grandsons were George Cavendish, Thomas Cardinal Wolsey's biographer, and George's younger brother Sir William Cavendish. Sir William gained great wealth from his position in the Exchequer and also, as it was alleged, from unfairly taking advantage of the Dissolution of the Monasteries. He married as his third wife the famous Bess of Hardwick, with whom he had eight children. One of their sons, Sir Charles Cavendish (1553–1617), was the father of William Cavendish, 1st Duke of Newcastle-upon-Tyne (see the Duke of Newcastle-upon-Tyne for more information on this branch of the family), while another son, Henry Cavendish, was the ancestor of the Barons Waterpark. Yet another son, William Cavendish, was a politician and a supporter of the colonialization of Virginia. In 1605 he was raised to the peerage as Baron Cavendish, of Hardwicke in the County of Derby, and in 1618 he was further honoured when he was made Earl of Devonshire. Both titles are in the Peerage of England.

On his death the titles passed to his eldest son, the fourth Duke, who was a prominent politician. He was summoned to the House of Lords through a writ of acceleration in his father's junior title of Baron Cavendish of Hardwicke in 1751 and served as First Lord of the Treasury and titular Prime Minister of Great Britain from 1756 to 1757. Devonshire married Charlotte Boyle, 6th Baroness Clifford, daughter of the famous architect Richard Boyle, 3rd Earl of Burlington (on whose death in 1753 the earldom of Burlington became extinct). Their third and youngest son Lord George Cavendish was created Earl of Burlington in 1831. Devonshire was succeeded by his eldest son, William Cavendish, who became the fifth Duke of Devonshire. He had already succeeded his mother as seventh Baron Clifford in 1754. He served as Lord-Lieutenant of Derbyshire from 1782 to 1811 but is best remembered for his first marriage to Lady Georgiana Spencer, the celebrated beauty and society hostess.

The sixth, seventh and eighth Dukes 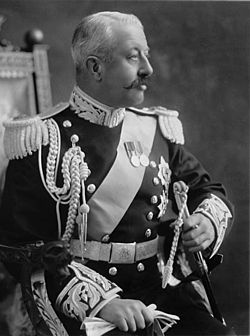 Their only son, the sixth Duke, served as Lord Chamberlain of the Household from 1827 to 1828 and from 1830 to 1834. Known as the "Bachelor Duke", he never married and on his death in 1858 the barony of Clifford fell into abeyance between his sisters. He was succeeded in the other titles by his first cousin once removed, the second Earl of Burlington, who became the seventh Duke (see the Earl of Burlington for earlier history of this branch of the family). He was the son of William Cavendish, eldest son of the aforementioned first Earl of Burlington, youngest son of the fourth Duke. He was Lord-Lieutenant of Lancashire and Derbyshire and Chancellor of the University of London and of the University of Cambridge. He was succeeded by his second but eldest surviving son, the eighth Duke. He was a noted statesman and the most famous member of the Cavendish family. Known under his courtesy title of Marquess of Hartington until 1891, he held political office for a period spanning 40 years, notably as Secretary of State for India and as Secretary of State for War, and three times declined to become Prime Minister. He married Louise, Dowager Duchess of Manchester, who became known as the "Double Duchess".

The ninth, tenth and eleventh Dukes

Devonshire died childless and was succeeded by his nephew, the ninth Duke. He was the eldest son of Lord Edward Cavendish, third son of the seventh Duke. He was a Conservative politician and served as Governor General of Canada from 1916 to 1921 and as Secretary of State for the Colonies from 1922 to 1924.

Devonshire was therefore succeeded by his second but eldest surviving son, the eleventh Duke. He sat on the Conservative benches in the House of Lords and held political office under his uncle Harold Macmillan and later Sir Alec Douglas-Home from 1960 to 1964. Devonshire married the Hon. Deborah Mitford, the youngest of the famous Mitford sisters. As of 2009 the titles are held by their second and only surviving son, the twelfth Duke, who succeeded in 2004.

Other notable members of the Cavendish family 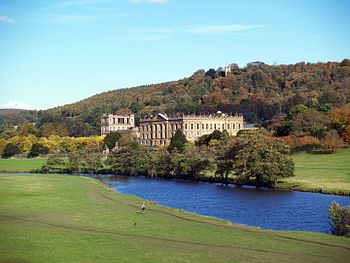 Chatsworth House, the ancestral seat of the Dukes of Devonshire

Lord Frederick Cavendish, third son of the seventh Duke, was a Liberal politician. He had just been appointed Chief Secretary for Ireland in 1882 when he was assassinated by nationalists in Phoenix Park, Dublin. His wife Lady Frederick (Lucy) Cavendish was a pioneer of women's education. Lord Edward Cavendish, fourth and youngest son of the seventh Duke, sat as Member of Parliament for several constituencies. His second son Lord Richard Cavendish represented North Lonsdale in Parliament. In 1911 he was one of the proposed recipients of peerages in case the Bill that was to become the Parliament Act 1911 was not accepted by the House of Lords. His grandson Hugh Cavendish was created a life peer as Baron Cavendish of Furness in 1990. Lady Dorothy Cavendish, daughter of the ninth Duke, was the wife of Prime Minister Harold Macmillan. 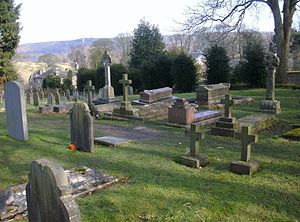 St Peter's Church, Edensor, Cavendish family plot with the graves of the Dukes of Devonshire

The family seats are Chatsworth House, Bolton Abbey in Yorkshire, and Lismore Castle in Co Waterford, in the Republic of Ireland. Compton Place in Eastbourne belongs to the family (which developed Eastbourne as a seaside resort in the 19th century) but is let. In 1908 Holker Hall in Lancashire was left to a junior branch of the family. The family previously owned Londesborough Hall, Yorkshire; Hardwick Hall, Derbyshire; Chiswick House, Middlesex; and two London mansions on Piccadilly - Devonshire House and Burlington House. In 1907 the Duke owned 192,322 acres across the British Isles, principally in Derbyshire, Yorkshire, County Cork and County Waterford.[3]

The traditional burial place of the Dukes of Devonshire is at St Peter's Church, Edensor, in the closest village to Chatsworth House. Most ducal graves can be found on the highest spot of Edensor's churchyard in the Cavendish family plot.

Other titles: Baron Cavendish of Hardwick, in the county of Derby (1605) 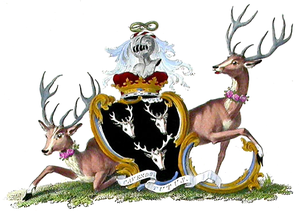 Armorial Achievement of the Dukes of Devonshire. Arms: Sable, 3 stags' (or bucks') heads caboshed (or cabossed). Crest: A serpent nowed proper (or vert). Supporters: On either side, a buck (or stag) wreathed (or gorged) about the neck with a chaplet (or garland) of roses proper—but see note! Motto: Cavendo tutus, Safe through caution. NOTE: The stags' head are sometimes given as attired Or; for example, [1]. The garlands should be roses alternately argent and azure (see the preceding, [2], and the next). At least the 6th duke substituted as a crest a buck statant wreathed as the supporters (see the 1836 Debrett's Peerage of England, Scotland, and Ireland, viewable via Google Books).

Other titles (7th Duke onwards): Earl of Burlington and Baron Cavendish of Keighley, in the county of York (1831)

The earldom of Devonshire was originally granted as a recreation of the title of Earl of Devon, then held to be extinct; but which was found to have been in existence de jure in 1831. These are held by different families, and are now held to be distinct titles.

The Devon earldom had earlier been held by the ancient de Redvers family and by the Courtenay family who had married in the Tudor era the daughter of King Edward IV, Princess Katherine of York and whose son was later made Marquess of Exeter. The Marquess of Exeter was executed for treason and his son was probably poisoned in 1556. From that date, the peerage was vacant. By choosing Devonshire the Cavendish family, who had only recently arrived socially on the political scene, were aligning themselves with some of the oldest families in England. It should be noted that historically 'Devon' and 'Devonshire' were alternating terms and as late as the eighteenth century Georgiana Cavendish was sometimes referred to as the Duchess of Devon.

The fifth Duke and Duchess of Devonshire are portrayed in the 2008 film The Duchess directed by Saul Dibb, starring Ralph Fiennes as the Duke and Keira Knightley as the Duchess. The film (which also mentions the birth of the sixth Duke, their only son) is based on Amanda Foreman's biography of the scandalous 18th-century English aristocrat Georgiana Cavendish, Duchess of Devonshire.

Along with Jane Austen, Elizabeth and the fifth Duke appear, soon after Georgiana's death, in Jane and the Stillroom Maid, a murder mystery by Stephanie Barron.

In John Buchan's novel The Three Hostages (1924), 'the late Duke of Devonshire' is cited as an epitome of Englishness. This probably refers to the eighth duke.[citation needed]