From Infogalactic: the planetary knowledge core
(Redirected from Dukes of Normandy)
Jump to: navigation, search

Duke of Normandy was the title given to the rulers of the Duchy of Normandy in northwestern France, which has its origins as the County of Rouen, a fief created in 911 by King Charles III "the Simple" of France for Rollo, a Norwegian nobleman and leader of Northmen.

In 1066 the reigning duke, William the Bastard, conquered England, whereupon he became known as King William I "the Conqueror". From then on, the Duke of Normandy and the King of England were usually the same person, until the King of France seized Normandy from King John in 1204. John's son, Henry III, renounced the ducal claim in the Treaty of Paris (1259).

Thereafter, the duchy formed an integral part of the French royal demesne. The Valois Kings of France started a tradition of granting the title to their heirs apparent until it was supplanted by the title Dauphin. The title was granted four times between the French conquest of Normandy by Philip Augustus and the dissolution of the French monarchy in 1792. 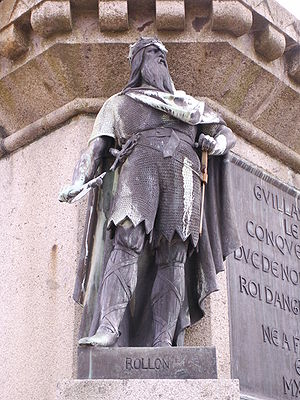 Statue of Rollo in Falaise, Calvados

The Fiefdom of Normandy was created in 911 for the Viking leader Rollo (also known as Rolf).

After participating in many Viking incursions along the Seine, culminating in the siege of Paris in 886, Rollo was finally defeated by King Charles the Simple. With the Treaty of St.-Claire-sur-Epte, Rollo swore fealty to the French King, converted to Christianity and was baptized with the name Robert. Charles then granted Rollo territories around Rouen, which came to be called Normandy after the Northmen (Latinised Normanni).

Rollo and his immediate successors were styled "counts" of Normandy. Some later medieval sources refer to them by the title dux, the Latin word from which the English word "duke" is derived; however, Rollo's great-grandson Richard II was the first to assuredly be styled "Duke of Normandy".

Although certain titles were used interchangeably during this period, the title of "duke" was typically reserved for the highest rank of feudal nobility — either those who owed homage and fealty directly to kings, or who were independent sovereigns (primarily distinguished from kings by not having dukes as vassals).[citation needed] 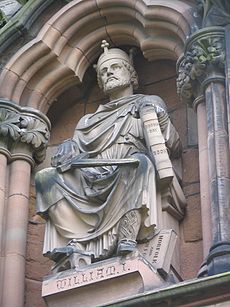 William I (William the Conqueror)

William the Conqueror added the Kingdom of England to his realm after the Norman Conquest of 1066. This created a problematic situation wherein William and his descendants were kings in England but vassals to the king in France. Much of the contention which later arose around the title "Duke of Normandy" (as well as other French ducal titles during the Angevin period) stemmed from this fundamentally irreconcilable situation.

After the death of William the Conqueror, his eldest son, Robert Curthose, became Duke of Normandy while a younger son, William Rufus, became king William II of England. William II was succeeded in 1100 as king of England by another brother, William the Conqueror's youngest son, Henry I. When Henry deposed Robert in 1106 he claimed both titles, Duke of Normandy and King of England, uniting them once again.[citation needed]

In 1204, King Philip II of France confiscated the Duchy of Normandy, held at that time by King John of England, and subsumed it into the crown lands. Only the Channel Islands [lower-alpha 1] and Calais remained under John's control. In 1259, Henry III of England recognised the legality of French possession of mainland Normandy under the Treaty of Paris.

English monarchs made subsequent attempts to reclaim their former continental possessions, particularly during the Hundred Years' War, and even claimed the throne of France itself.

With the Treaty of Troyes in 1420, Henry V of England temporarily regained all territories formerly held by the Plantagenets, including Normandy, and was made regent and heir to France. His son, Henry VI, inherited both kingdoms in 1422 and afterwards English monarchs included "King of France" in their list of titles. They also included the Royal Arms of France in their own armorial achievements, even after they had lost their French possessions (with the exception of Calais) after 1450.

British claims to the throne of France and other French territory were not formally abandoned until 1801, when George III and Parliament, in the Act of Union, joined the Kingdom of Great Britain with the Kingdom of Ireland and used the opportunity to drop the claim to France. By that time it had become obsolete, since the French monarchy itself had been overthrown in 1792 with the establishment of the French Republic. The French revolution also brought an end to the Duchy of Normandy as a political entity, as it was replaced by several Departments of France. 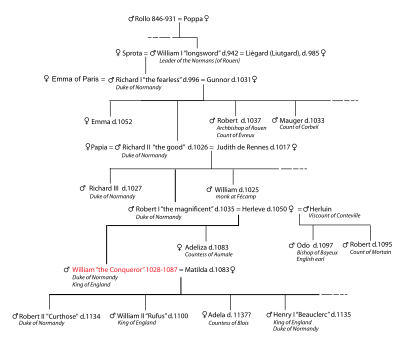 Kings of England indicated by an asterisk (*)

In 1204, the King of France confiscated the Duchy of Normandy (with only the Channel Islands remaining under English control) and subsumed it into the crown lands of France. Thereafter, the ducal title was held by several French princes.

In 1332, King Philip VI gave the Duchy in appanage to his son John, who became king John II of France in 1350. He in turn gave the Duchy in appanage to his son Charles, who became king Charles V of France in 1364. In 1465, Louis XI, under constraint, gave the Duchy to his brother Charles de Valois, Duke of Berry. Charles was unable to hold the Duchy and in 1466 it was again subsumed into the crown lands and remained a permanent part of them. The title was conferred on a few junior members of the French royal family before the abolition of the French monarchy in 1792. 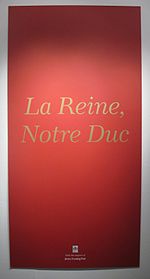 In the Channel Islands, the Queen is known informally as the "Duke of Normandy", notwithstanding the fact that she is a woman. The Channel Islands are the last remaining part of the former Duchy of Normandy to remain under the rule of the British monarch. Although the English monarchy relinquished claims to continental Normandy and other French claims in 1259 (Treaty of Paris), the Channel Islands (except for Chausey under French sovereignty) remain Crown dependencies of the British Crown. The British historian Ben Pimlott noted that while Queen Elizabeth II was on a visit to mainland Normandy in May 1967, French locals began to doff their hats and shout "Vive la Duchesse!", to which the Queen supposedly replied "Well, I am The Duke of Normandy!".[3] Both Channel Islands legislatures refer to Elizabeth II in writing as "The Queen in the right of Jersey" or "The Queen in the right of Guernsey" respectively.[citation needed] However, the Queen is informally referred to as "The Duke of Normandy", the title used by the islanders, especially during their loyal toast, where they informally[4] say "The Queen, our Duke" or, in French "La Reine, notre Duc", rather than simply "The Queen", as is the practice in the United Kingdom.[5]