From Infogalactic: the planetary knowledge core
(Redirected from Dulce Et Decorum Est)
Jump to: navigation, search
This article is about the World War I poem. For the Latin lines by Horace, see Dulce et decorum est pro patria mori.

"Dulce et Decorum est" is a poem written by Wilfred Owen during World War I, and published posthumously in 1920. The Latin title is taken from the Roman poet Horace and means "it is sweet and honorable...", followed by pro patria mori, which means "to die for one's country". Owen's poem is known for its horrific imagery and condemnation of war. It was drafted at Craiglockhart in the first half of October 1917 and later revised, probably at Scarborough but possibly Ripon, between January and March 1918. The earliest surviving manuscript is dated 8 October 1917 and addressed to his mother, Susan Owen, with the message "Here is a gas poem done yesterday (which is not private, but not final)."

Formally, the poem combines two sonnets, though the spacing of the stanzas is irregular.[citation needed] The text presents a vignette from the front lines of World War I; specifically, of British soldiers attacked with chlorine gas. In the rush when the shells with poison gas explode, one soldier is unable to get his mask on in time. The speaker of the poem describes the gruesome effects of the gas on the man and concludes that, if one were to see firsthand the reality of war, one might not repeat mendacious platitudes like dulce et decorum est pro patria mori: "it is sweet and honorable to die for one's country".

Through the poem, and particularly strong in the last stanza, there is a running commentary, a letter to Jessie Pope, a civilian propagandist of World War I, who encouraged—"with such high zest"—young men to join the battle, through her poetry, e.g. "Who's for the game?"

The first draft of the poem, indeed, was dedicated to Pope.[1] A later revision amended this to "a certain Poetess",[1] though this did not make it into the final publication, either, as Owen apparently decided to address his poem to the larger audience of war supporters in general such as the women who handed out white feathers during the conflict to men whom they regarded as cowards for not being at the front. In the last stanza, however, the original intention can still be seen in Owen's bitter address.

The title of this poem means 'It is sweet and glorious'. The title and the Latin exhortation of the final two lines are drawn from the phrase "Dulce et decorum est pro patria mori" written by the Roman poet Horace in (Ode III.2.13):[2]

These words were well known and often quoted by supporters of the war near its inception and were, therefore, of particular relevance to soldiers of the era.

In 1913, the first line, Dulce et decorum est pro patria mori, was inscribed on the wall of the chapel of the Royal Military Academy Sandhurst.[3] In the final stanza of his poem, Owen refers to this as "The old Lie".[4] 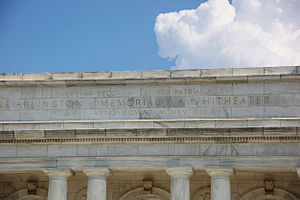 Detail of the inscription over the rear entrance to the Arlington Memorial Amphitheater. The inscription reads: "Dulce et decorum est pro patria mori", written by the Roman poet Horace

The style of "Dulce et Decorum est" is similar to the French ballade poetic form.[5] By referencing this formal poetic form and then breaking the conventions of pattern and rhyming, Owen accentuates the disruptive and chaotic events being told.

The poem is in two parts, each of 14 lines. The first part of the poem (the first 8 line and the second 6 line stanzas) is written in the present as the action happens and everyone is reacting to the events around them. In second part (the third 2 line and the last 12 line stanzas), Owen writes as though at a distance from the horror: he refers to what is happening twice as if in a "dream", as though standing back watching the events or even recalling them. The second part looks back to draw a lesson from what happened at the start. The two 14 line parts of the poem again echoes a formal poetic style, the sonnet and again it is a broken and unsettling version of this form.[5]

Studying the two parts of the poem also reveals a change in the use of language from visual impressions outside the body, to sounds produced by the body - or a movement from the visual to the visceral.[6] In the opening lines, the scene is set with visual phrases like ‘haunting flares’ but after the gas attack, Owen uses sounds produced by the victim - ‘guttering’, ‘choking’, ‘gargling’. In this way, Owen mirrors the terrible nature of phosgene, which corrodes the body from inside.[6]

In May 1917 Owen was diagnosed with neurasthenia (shell-shock) and sent to Craiglockhart hospital near Edinburgh to recover. Whilst receiving treatment at the hospital, Owen became the editor of the hospital magazine, The Hydra, and met the poet Siegfried Sassoon, who was to have a major impact upon his life and work and to play a crucial role in the dissemination of Owen’s poetry following his untimely death in 1918, aged only 25. Owen wrote a number of his most famous poems at Craiglockhart, including several drafts of both ‘Dulce et Decorum est’ and ‘Anthem for Doomed Youth’. Sassoon advised and encouraged Owen, and this is evident in a number of drafts which include Sassoon’s annotations.[7]

Only five of Owen’s poems were published in his lifetime. However, after his death his heavily worked manuscript drafts were brought together and published in two different editions by Siegfried Sassoon with the assistance of Edith Sitwell (in 1920) and Edmund Blunden (in 1931).[7]