From Infogalactic: the planetary knowledge core
Jump to: navigation, search
This article is about Maharaja Duleep/Dalip Singh. For other persons with similar names, see Dalip Singh (disambiguation).

Maharaja Duleep Singh, GCSI (6 September 1838 – 22 October 1893), also known as Dalip Singh[1] and later in life nicknamed the Black Prince of Perthshire,[2] was the last Maharaja of the Sikh Empire. He was Maharaja Ranjit Singh's youngest son, the only child of Maharani Jind Kaur.

After the assassinations of four of his predecessors, he came to power in September 1843, at the age of five. For a while his mother ruled, as Regent, but in December 1846, after the First Anglo-Sikh War, she was replaced by a British Resident and imprisoned. Mother and son were not allowed to meet again for thirteen and a half years. In April 1849 ten-year-old Duleep was put in the care of Dr John Login.

He was exiled to Britain at age 15 and was befriended and much admired by Queen Victoria, who is reported to have written of the Punjabi Maharaja: "Those eyes and those teeth are too beautiful".[3] The Queen was godmother to several of his children.[4]

In 1856 he tried to contact his mother, but his letter and emissaries were intercepted by the British in India, and didn't reach her. However, he persisted and, with help from Login, was allowed to meet her on 16 January 1861 at Spence's Hotel in Calcutta and return with her to the United Kingdom.[5] During the last two years of her life, his mother told the Maharaja about his Sikh heritage and the Empire which once had been his to rule. 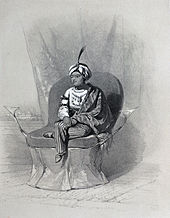 After the death of Ranjit Singh in 1839, Duleep Singh lived quietly with his mother, Jind Kaur, at Jammu, under the protection of the vizier, Raja Dhian Singh. He and his mother were recalled to Lahore in 1843 after the assassinations of Maharaja Sher Singh and Dhian Singh, and on 16 September, at the age of five, Duleep Singh was proclaimed Maharaja of the Sikh Empire, with Maharani Jind Kaur as Regent.

On 13 December 1845 the British declared war on the Sikhs and, after winning the First Anglo-Sikh War, retained the Maharaja as nominal ruler, but replaced the Maharani by a Council of Regency and later imprisoned and exiled her. Over thirteen years passed before Duleep Singh was permitted to see his mother again.

After the close of the Second Anglo-Sikh War and the subsequent annexation of the Punjab on 29 March 1849,[6] he was deposed at the age of ten[7] and was put into the care of Dr John Login and sent from Lahore to Fatehgarh on 21 December 1849, with tight restrictions on who he was allowed to meet. No Indians, except trusted servants, could meet him in private. As a matter of British policy, he was to be anglicised in every possible respect. His health was reportedly poor and he was often sent to the hill station of Landour near Mussoorie in the Lower Himalaya for convalescence, at the time about 4 days' journey. He would remain for weeks at a time in Landour at a grand hilltop building called The Castle, which had been lavishly furnished to accommodate him. 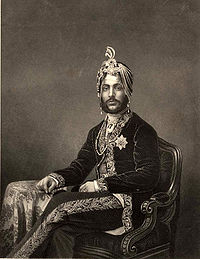 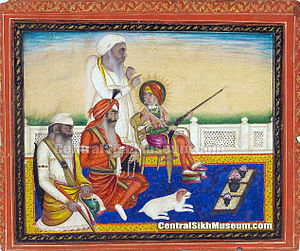 Maharaja Duleep Singh in durbar on a terrace with Labh Singh and Tej Singh and an attendant Lahore, circa 1850

In 1853, under the tutelage of his long-time retainer Bhajan Lal (himself a Christian convert), he converted to Christianity at Fatehgarh with the approval of the Governor-General Lord Dalhousie. His conversion remains controversial, and it occurred before he turned 15. He later had serious doubts regarding this decision and reconverted back to Sikhism in 1886.

He was also heavily and continuously exposed to Christian texts under the tutelage of the devout John Login. His two closest childhood friends were both English Anglican missionaries. 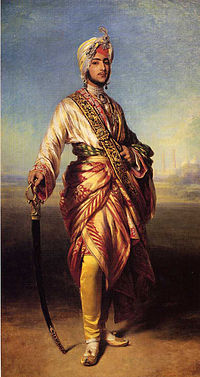 Duleep Singh's arrival on the shores of England in 1854 threw him into the European court. Queen Victoria showered affection upon the turbaned Maharajah, as did the Prince Consort. Duleep Singh was initially lodged at Claridge's Hotel in London before the East India Company took over a house in Wimbledon and then eventually another house in Roehampton which became his home for 3 years. He was also invited by the Queen to stay with the Royal Family at Osborne, where she sketched him playing with her children and Prince Albert photographed him, while the court artist, Winterhalter, made his portrait.[8] He eventually got bored with Roehampton and expressed a wish to go back to India but it was suggested by the East India Company Board he take a tour of the European continent which he did with Sir John Spencer Login and Lady Login. He was a member of the Photographic Society, later Royal Photographic Society from 1855 until his death. [9]

On his return from Europe in 1855 he was given an annual pension, and was officially under ward of Sir John Spencer Login and Lady Login, who leased Castle Menzies in Perthshire, Scotland for him. He spent the rest of his teens there but at 19 he demanded to be in charge of his household. Eventually, he was given this and an increase in his annual pension. In 1859 Lt Col James Oliphant was installed as Equerry to the Maharajah at the recommendation of Sir John Login. Oliphant was to be a possible replacement should anything happen to the Maharajah's most trusted friend Sir John Login (who did indeed die four years later in 1863).[10]

Reunion with his mother

When he was 18 Duleep Singh wrote to his mother in Kathmandu, suggesting that she should join him in England, but his letter was intercepted by the British in India and did not reach her. He then sent a courier, Pundit Nehemiah Goreh, who was also intercepted and forbidden to contact the Maharani. Duleep Singh then decided to go himself. Under cover of a letter from Login he wrote to the British Resident in Kathmandu, who reported that the Rani had 'much changed, was blind and had lost much of the energy which formerly characterised her.' The British decided she was no longer a threat and she was allowed to join her son on 16 January 1861 at Spence’s Hotel in Calcutta and return with him to England.[11]

In 1858 the lease of Castle Menzies expired and Duleep Singh rented the house at Auchlyne from the Earl of Breadalbane. He was known for a lavish lifestyle, shooting parties, and a love of dressing in highland costume and soon had the nickname "the Black Prince of Perthshire".[12] (At the same time, he was known to have gradually developed a sense of regret for his circumstances in exile, including some inner turmoil about his conversion to Christianity and his forced departure from the Punjab). His mother stayed in Perthshire with him for a short time, before he rented the Grantully Estate, near Aberfeldy. Following the deaths of his mother and John Login in 1863, he returned to England.[13]

Duleep Singh took on a lease at Mulgrave Castle in Yorkshire in 1858 and enjoyed the English countryside while there. 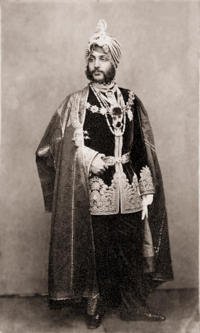 Duleep Singh bought (or the India Office purchased for him) a 17,000 acre (69 km²) country estate at Elveden on the border between Norfolk and Suffolk, close to Thetford, in 1863. He enjoyed living in Elveden and the surrounding area and restored the church, cottages, and school. He transformed the run-down estate into an efficient game preserve of approximately 17,000 acres (69 km2) and it was here that he gained his reputation as the fourth best shot in England.[14][15][16] The house was remodeled into a quasi-oriental palace where he lived the life of a British aristocrat.[17] Duleep Singh was accused of running up large expenses and the estate was sold after his death to pay his debts. Today, Elveden is owned by descendants of the Guinness family of brewing fame; it remains an operating farm and private hunting estate. 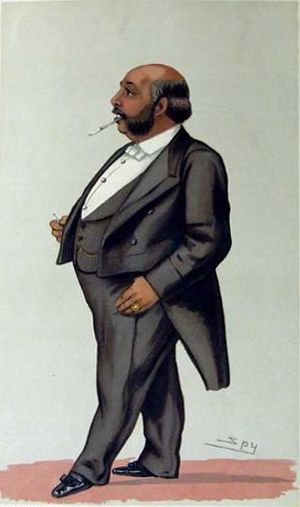 A caricature by "Spy" of Duleep Singh

While in exile, he sought to learn more about Sikhism and was eager to return to India. Though previous efforts were thwarted by his handlers, he reestablished contact with his cousin Sardar Thakar Singh Sandhawalia, who on 28 September 1884, left Amritsar for England along with his sons Narinder Singh and Gurdit Singh and a Sikh granthi (priest), Pratap Singh Giani. He also brought a list of properties held by Duleep Singh in India. All this renewed his connection with Sikhism.[18]

The British Government decided in 1886 against his return to India or his re-embracing Sikhism. Despite protests from the India Office, he set sail for 'home' on 30 March 1886. However, he was intercepted and arrested in Aden, where the writ of the Governor General of India began. He could not be stopped from an informal re-conversion ceremony in Aden, far less grand and symbolic than it would have been in India, done by emissaries sent by Sardar Thakar Singh Sandhawalia, who was earlier planning the Pahaul ceremony at Bombay.[18] Duleep was forced to return to Europe. 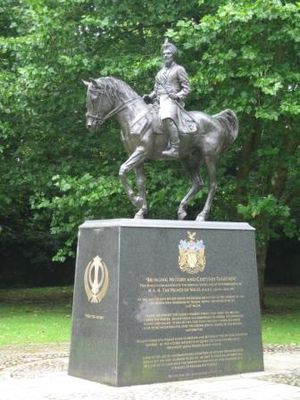 Duleep Singh died in Paris in 1893 at the age of 55, having seen India after the age of fifteen during only two brief, tightly-controlled visits in 1860 (to bring his mother to England) and in 1863 (to scatter his mother's ashes).

Duleep Singh's wish for his body to be returned to India was not honoured, in fear of unrest, given the symbolic value the funeral of the son of the Lion of the Punjab might have caused, given growing resentment of British rule. His body was brought back to be buried according to Christian rites, under the supervision of the India Office in Elveden Church beside the grave of his wife Maharani Bamba, and his son Prince Edward Albert Duleep Singh. The graves are located on the west side of the Church.

A life-size bronze statue of the Maharajah showing him on a horse was unveiled by HRH the Prince of Wales in 1999 at Butten Island in Thetford, a town which benefited from his and his sons' generosity.[4][19]

A film titled, Maharaja Duleep Singh: A Monument Of Injustice was made in 2007, directed by P.S. Narula.[23]

A coat of arms was granted, commissioned by Prince Albert.

Duleep Singh married twice, first to Bamba Müller and then to Ada Douglas Wetherill. He had eight children in total, six from his first marriage to Bamba:

He also had two children from his second marriage to Ada Douglas Wetherill:

All the eight children died without legitimate issue, ending the direct line of the Sikh Royalty.[25]

There is a memorial at Eton College in England to Princes Victor and Frederick, Maharajah Duleep Singh's two sons who studied at Eton in the 1870s.[3]

Maharani Bamba Müller was an Arabic-speaking, part-Ethiopian, part-German girl, whose father was a German banker and whose mother was an Abyssinian Coptic Christian slave. She and Duleep met in Cairo in 1863 on his return from scattering his mother's ashes in India; they were married in Alexandria, Egypt on 7 June 1864. The Maharani died in London on 18 September 1887.

Some sources describe Ada Douglas Wetherill as a French princess. In fact, she was neither French nor a princess. This is very likely a fiction created to give her some legitimacy later in life. Wetherill had been Duleep's mistress before he decided to return to India with his family, and upon being stopped in Aden by the British authorities he abandoned his family and moved to Paris, where she joined him. She stayed with him through his years in Paris and also travelled with him to St Petersburg, Russia, where he failed to persuade the Czar of the benefits of invading India through the north and reinstalling him as ruler.[26]

Queen Victoria and Maharaja Duleep Singh reconciled their differences before he died. Out of loyalty to Maharani Bamba, the Queen refused to receive Ada, who she suspected had been involved with the Maharaja before Maharani Bamba's death in 1887.[27]

"What became of the Alhambra lass [a music hall in Leicester Square, London] and the dusky tadpoles that drove about the King's Road in Brighton history does not tell".[28]