From Infogalactic: the planetary knowledge core
(Redirected from Dulse)
Jump to: navigation, search

Palmaria palmata, also called dulse, dillisk or dilsk (from Irish/Scottish Gaelic duileasc/duileasg), red dulse, sea lettuce flakes, or creathnach, is a red alga (Rhodophyta) previously referred to as Rhodymenia palmata. It grows on the northern coasts of the Atlantic and Pacific Oceans. It is a well-known snack food. In Iceland, where it is known as söl, it has been an important source of dietary fiber throughout the centuries.

The earliest record of this species is of St Columba's monks harvesting it 1,400 years ago.[1]

The erect frond of dulse grows attached by its discoid holdfast and a short inconspicuous stipe epiphytically on to the stipe of Laminaria or to rocks. It has a short stipe, and the fronds are variable in colour from deep rose to reddish purple and are rather leathery in texture. The flat foliose blade gradually expands and divides into broad segments ranging in size to 50 centimetres (20 in) long and 3–8 cm (1.2–3.1 in) in width which can bear flat, wedge-shaped proliferations from the edge.[2][3]

Dulse is similar to another seaweed, Dilsea carnosa,[7] but Dilsea is more leathery with blades up to 30 cm (12 in) long and 20 cm (7.9 in) wide. Unlike P. palmata, it is not branched and does not have proliferations or branches from the edge of the frond, although the older blades may split.[8]

The full life history was not fully explained until 1980.[9] Tetraspores occur in scattered sori on the mature blade, which is diploid. Spermatial sori occur scattered over most of the frond of the haploid male plant. The female gametophyte is very small stunted or encrusted, the carpogonia apparently occurring as single cells in the young plants. The male plants are blade-like and produce spermatia which fertilize the carpogonia of the female crust. After fertilization, the diploid plant overgrows the female plant and develops into the tetrasporangial diploid phase attached to the female gametophyte. The adult foliose tetrasporophyte produces tetraspores meiotically.[2] It is therefore usually the diploid tetrasporic phase or the male plant which is to be found on the shore.[10]

P. palmata is to be found growing from mid-tide of the intertidal zone (the area between the high tide and low tide) to depths of 20 m or more in sheltered and exposed shores.[10] 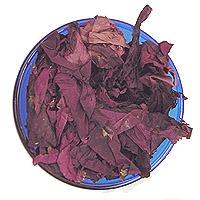 Dulse is a good source of minerals and vitamins compared with other vegetables, contains all trace elements needed by humans, and has a high protein content.[1]

Researchers at Oregon State University's Hatfield Marine Science Center have selected a fast-growing strain of Pacific dulse (P. mollis). Originally intended as a superfood for abalone, they claim their strain of the seaweed tastes like bacon when fried.[11][12]

It is commonly found from June to September and can be picked by hand when the tide is out. When picked, small snails, shell pieces, and other small particles can be washed or shaken off and the plant then spread to dry. Some gatherers may turn it once and roll it into large bales to be packaged later. It is used as fodder for animals in some countries.

Dulse is commonly used in Ireland,[13] where it can be used to make "White Soda Bread"[14] Iceland, Atlantic Canada, and the Northeast United States as food and medicine. It can be found in many health food stores or fish markets and can be ordered directly from local distributors. In Ballycastle, Northern Ireland, it is traditionally sold at the Ould Lammas Fair. It is particularly popular along the Causeway Coast. Although a fast-dying tradition,[citation needed] many gather their own dulse. Along the Ulster coastline from County Down to County Donegal, it is eaten dried and uncooked as a snack.

It is used in cooking: dulse's properties are similar to those of a flavour-enhancer. It is commonly referred to as dillisk on the west coast of Ireland. Dillisk is usually dried and sold as a snack food from stalls in seaside towns by periwinkle sellers.

Fresh dulse can be eaten directly off the rocks before sun-drying. Sun-dried dulse is eaten as is or is ground to flakes or a powder. In Iceland, the tradition is to eat it with butter. It can be pan-fried quickly into chips, baked in the oven covered with cheese, with salsa, or simply microwaved briefly. It can be used in soups, chowders, sandwiches, and salads, or added to bread or pizza dough. Finely diced, it can be used as a flavour enhancer in meat dishes, such as chili, in place of monosodium glutamate.

P. palmata is the only species of Palmaria found on the coast of Atlantic Europe. It can be found from Portugal to the Baltic coasts and on the coasts of Iceland and the Faroe Islands.[15] It also grows on the shores of Arctic Russia, Arctic Canada, Atlantic Canada, Alaska, Japan, and Korea.[10] Records of P. palmaria from California are actually of Palmaria mollis.[6]

Galls, possibly produced by nematodes, copepods, or bacteria, are known to infect these plants. They were recorded as "outgrowths of tissue produced by the presence...of an animal."[10][16]