Dumat al-Jundal (Arabic: دومة الجندل‎‎) is an ancient city of ruins located in North Western Saudi Arabia in the Al Jawf Province; it is located 37 km away from Sakakah. The name Dumat al-Jandal means literally "Dumah of the Stone", since this was the territory of Dumah, one of the twelve sons of Ishmael. The city's ancient Akkadian name was Adummatu.

The city has a history dating back to the 10th century BC and is mentioned in Akkadian inscriptions of the Assyrian empire dating to 845 BC in which it is referred to as Adummatu and is described as the capital of an Arab kingdom, sometimes named as Qedar (Qidri). The names of five powerful Arab queens that ruled this city are known, among them Zabibe, Samsi, Tabua and Te'elhunu. The latter is also given the title of high priestess of Atarsamain, a deity of fertility, love and war associated with Ishtar. Dumat al-Jundal was the site of an important temple dedicated to Ishtar. 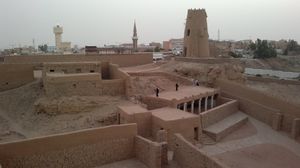 Inside view of Mard Castle

Excavations made by Khaleel Ibrahim al-Muaikel in 1986 added to observations made in 1976 that an homogenous layer of Roman-Nabataean pottery sherds indicating a prosperous community during the time of the Nabataeans to whom this realm of the region probably belonged.[1]

In 106 AD, Dumatha was incorporated into the Roman Empire when the Emperor Trajan defeated the Nabataeans. Dumatha remained integral to the Limes Arabicus for over four centuries, serving as the easternmost settlement along the limes. In 269 CE, the place was mentioned by Zenobia, the Queen of Palmyra, as city with an immune fortress. After her forces had captured the city, the fortress of Marid withstood the attack in her revolt against the Romans. Later in the 5th century CE, the city became the capital of the kingdom of Kindah. In 633 CE, Khalid ibn al-Walid captured Dumat Al-Jandal and it became a part of the newly formed Islamic empire.

Muhammad ordered the Invasion of Dumatul Jandal took in July 626.[2] The purpose was to Invade Duma, because Muhammad received intelligence that some tribes there were involved in highway robbery and preparing to attack Medina itself.[3] No casualties were reported as, Ghatafan tribe flees[3]

He also ordered the Expedition of Khalid ibn al-Walid (Dumatul Jandal) which took place in October 630 [4] to attack the Christian prince of Duma.[5]

The mosque of Omar Ibn al-Khattab is situated in the town of Dumat al-Jandal, a major intersection of ancient trade routes linking Mesopotamia, Syria and the Arabian Peninsula. The mosque itself was built in 634-644. However, the actual building appears to have been built in a much later period, casting doubt upon its attribution to Umar Ibn al-Khattab. Some scholars attribute it to the Umayyad Caliph Omar bin Abul Aziz, and some believe that the mosque was named after Bani'Amr, a tribe that settled in Dumat al-Jandal. 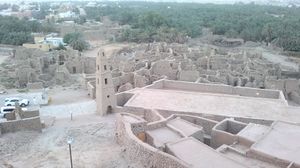 The north (qibla) wall of the mosque faces the al-Marid castle across a street. On its other three sides, it is surrounded by dense urban fabric. Like the other old buildings in the town, the mosque is built in stone. It is composed of a courtyard preceding the main prayer hall to the south and another space, also used for prayer, to the north. The minaret is at the southwestern corner of the prayer hall bridging over a street. The mosque is entered through a door situated in the qibla wall, near the minaret. The prayer hall is formed by three rows of stone pillars, running parallel to the qibla wall. The pillars are all by wooden lintels, which in turn support layers of stone that are roofed by mud-plastered acacia and palm trunks.

The mihrab is a narrow, highly pointed niche in the center of the qibla wall, and is defined by a similar niche with three built-in stone steps to its right. The mihrab, the minbar, and the lower part of the qibla wall are lastered white. Viewed from the exterior, one sees that the mihrab and minbar protrude slightly out of the qibla wall. Also visible is an exposed stone staircase constructed along the qibla wall from the street side that reaches the mud roof. The minaret shaft has a rectangular shape that tapers upward to end in a pyramidal roof. The four internal floors of the shaft were accessed by a now-collapsed spiral staircase entered from the mosque. On each side of the minaret, and on each floor, a rectangular window with a stone lintel provides lighting for its interior.

Al Dar'i Quarter is located in the neighborhood of Omar Bin Al Khatab Mosque and Marid fortress, which represent the old quarter of Dumat Al Jandal. Al Dar'i Quarter is considered to be one of remaining antiquities of Dumat Al Jandal's ancient city which has escaped the demolition shovels befalling the historical market of Dumat Al Jandal 25 years ago. Dr. Khalil Al Meaigil has stated that, the facilities of the quarter which dates back to the middle Islamic age have established on antiquities layers and is based on layers of archaeological works dating back to the mid-first millennium BC. The neighborhood is characterized by the stone buildings and stone lanes between the gardens and water, which had a life of residents living near the by springs. In Al Dar'i Quarter there are many of houses which we hope will enjoy the necessary care and restoration. Worth mentioning that, the old quarter is built on the ruins of the earlier revivals which can be seen in multiple layers, as well as the emergence of the old road of the district under the existing buildings. We recommend documenting the individual buildings so as not to overlap the work of the buildings at the excavation site and lose interest to know the chronology of the site.