Dunfermline Abbey is a Church of Scotland Parish Church located in Dunfermline, Fife, Scotland. In 2002 the congregation had 806 members. The minister (since 2012) is the Reverend MaryAnn R. Rennie. The church occupies the site of the ancient chancel and transepts of a large medieval Benedictine abbey, which was sacked in 1560 during the Scottish Reformation and permitted to fall into disrepair. Part of the old abbey church continued in use at that time and some parts of the abbey infrastructure still remain to this day. Dunfermline Abbey is one of Scotland's most important cultural sites. 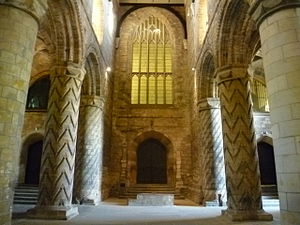 The nave from the reign of King David I

The Benedictine Abbey of the Holy Trinity and St Margaret, was founded in 1128 by King David I of Scotland, but the monastic establishment was based on an earlier foundation dating back to the reign of King Máel Coluim mac Donnchada (i.e. "Malcolm III" or "Malcolm Canmore", r. 1058-93) and his queen. At its head was an abbot, the first incumbent being Geoffrey of Canterbury, former prior of Christ Church, Canterbury, the Kent monastery that probably supplied Dunfermline's first monks. At the peak of its power it controlled four burghs, three courts of regality and a large portfolio of lands from Moray in the north down into Berwickshire.[2]

In the decades after its foundation the abbey was the recipient of considerable endowments, as seen from the dedication of 26 altars donated by individual benefactors and guilds and it was an important centre of pilgrimage after Dunfermline became a centre for the cult of St Margaret (Malcolm's wife and David's mother), from whom the monastery later claimed foundation and for which an earlier foundation charter was fabricated.[3] The foundations of the earliest church (the Church of the Holy Trinity) are under the present superb Romanesque nave built in the 12th century.

During the winter of 1303 the court of Edward I of England was held in the abbey, and on his departure next year most of the buildings were burned.[3] 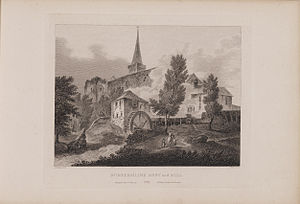 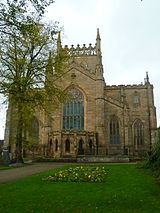 During the Scottish Reformation, the abbey church was sacked in March 1560. Some parts of the abbey infrastructure still remain, principally the vast refectory and rooms over the gatehouse which was part of the former city wall. The nave was also spared and it was repaired in 1570 by Robert Drummond of Carnock. It served as the parish church till the 19th century, and now forms the vestibule of a new church. This edifice, in the Perpendicular style, opened for public worship in 1821, occupies the site of the ancient chancel and transepts, though differing in style and proportions from the original structure. Also of the monastery there still remains the south wall of the refectory, with a fine window. Next to the abbey is the ruin of Dunfermline Palace, also part of the original abbey complex and connected to it via the gatehouse.

Dunfermline Abbey, one of Scotland's most important cultural sites, has received more of Scotland’s royal dead than any other place in the kingdom, excepting Iona. One of the most notable non-royal names to be associated with the abbey is the northern renaissance poet, Robert Henryson. The tomb of Saint Margaret and Malcolm Canmore, within the ruined walls of the Lady chapel, was restored and enclosed by command of Queen Victoria.[3] 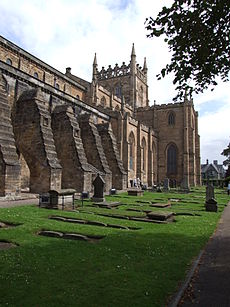 The current building on the site of the choir of the old Abbey church is a Parish Church of the Church of Scotland, still with the name Dunfermline Abbey. In 2002 the congregation had 806 members. The minister (since 2012) is the Reverend Mary Ann R. Rennie. 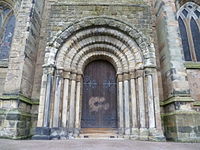 West Door of the Abbey

The old building was a fine example of simple and massive Romanesque, as the nave testifies, and has a beautiful doorway in its west front. Another rich Romanesque doorway was exposed in the south wall in 1903, when masons were cutting a site for the memorial to the soldiers who had fallen in the Second Boer War. A new site was found for this monument in order that the ancient and beautiful entrance might be preserved. The venerable structure is maintained publicly, and private munificence has provided several stained-glass windows. The architecture of Afghan church in Mumbai (dedicated to St. John the Baptist) has the door & the right side of the church taken from the Dunfermline Abbey. 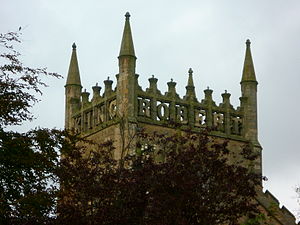