Dunlop is a brand of tyres owned by various companies around the world. It is owned and operated by Goodyear Tire and Rubber Company in North America, Europe, Australia and New Zealand.[1] In India the brand is owned by Dunlop India Ltd. whose parent company is the Ruia Group,.[2] In Asia (Japan, China, Indonesia, Thailand and Russia), Africa and Latin America (except Mexico) by Sumitomo Rubber Industries.[3]

In 1985, Dunlop Rubber Company was acquired by BTR plc, and Sumitomo acquired the rights to manufacture and market Dunlop branded road tyres. Sumitomo did not acquire any Dunlop company. In 1997 Sumitomo gained agreement to use the Dunlop name in its corporate name, and changed the name of its UK subsidiary to Dunlop Tyres Ltd.

In 1999 Sumitomo and Goodyear began a joint venture by which Sumitomo continued to manufacture all Japanese-made tyres under the Dunlop name, while Goodyear Tire and Rubber Company bought 75% of the European and North American tyre businesses of Sumitomo.[4]

The company has extensive manufacturing operations throughout the world. With the closure of the Washington plant in 2006, Goodyear Dunlop ceased mainstream car and lorry tyre production in the UK.[5]

In 2016 it was announced that Sumitomo Rubber Industries would commence the second phase of its $131 Million (USD) investment for the upgrade and expansion of its Dunlop tire manufacturing plant at Ladysmith, in South Africa.[6]

Dunlop maintained a motorsport manufacturing operation located in a corner of the original Dunlop factory (nicknamed "Fort Dunlop") in Erdington, Birmingham, established in 1891 until May 2014. This factory produced specialised vintage, motorcycle and touring car tyres, and produced about 300,000 specialised racing tyres per year. On 30 May 2014, the Birmingham factory ceased tyre production, ending Dunlop tyre production in the UK.[5]

The Dunlop GP Racer D209 tyre has been chosen repeatedly as a control tyre for the R&G Racing GSX-R Trophy motorcycle race. It has also been chosen for the Henderson Harley-Davidson XR1200 Trophy and Focused Events KTM RC8 Cup race. 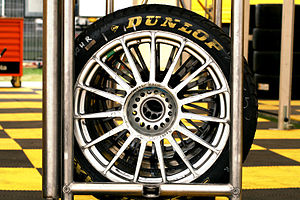 The main Birmingham building has been redeveloped extensively as a combined residential, office and hotel complex, with a modern shopping facility (The Fort Shopping Centre), car dealerships and several logistics warehouses. It can be observed between junction 5 and 6 of the M6, on the north side of the motorway.

Until May 2014 Goodyear Dunlop occupied a compact part of the site with their British main office. In the UK, the company operates as a sales organisation, importing tyres from manufacturing plants around the world, including China, Slovenia and Poland.

The Goodyear Dunlop joint venture is managed from sites in Luxembourg and Brussels, which report to Goodyear in Akron, Ohio, United States.