From Infogalactic: the planetary knowledge core
Jump to: navigation, search
For other uses, see Duns (disambiguation).

Duns (historically Scots: Dunsecode: sco is deprecated ) is the county town of the historic county of Berwickshire, within the Scottish Borders.

Duns law, the original site of the town of Duns, has the remains of an Iron Age hillfort at its summit. Similar structures nearby, such as the structure at Edin's Hall Broch, suggest the area's domestic and defensive use at a very early stage.

The first written mention of Duns is prior to 1179, when a 'Hugo de Duns' witnessed a charter of Roger d'Eu, of a grant of the benefice of the church of Langton to Kelso Abbey.[3] The town is further mentioned when a 'Robert of Douns' signed the Ragman Roll in 1296.[4] The early settlement was sited on the slopes of Duns Law, close to the original Duns Castle built in 1320 by the Earl of Moray, nephew of Robert the Bruce. The town was frequently attacked by the English in border raids and as they headed north to the Lothians. In 1318 at Duns Park, the Earl of Dunbar, Sir James Douglas, and Sir Thomas Randolph met with their respective forces, prior to the retaking of Berwick by the Scots.[5] In 1333 the Guardian of Scotland, Sir Archibald Douglas, mustered an army in Duns to march on Berwick, which at that time was under siege by the English. The Scots troops were heavily defeated at the Battle of Halidon Hill.

1377 saw the Earl of Northumberland invade Scotland. Camped at Duns, his army's horses were alarmed at night by the rattles used by the inhabitants to scare birds from their crops. The disarrayed English force was routed by the townsmen. The event is known as the Battle of Duns, and is the source of the town's motto, Duns Dings A!

In 1513, some 6 miles to the north of the town at Ellemford, James IV of Scotland mustered his army, prior to his campaign that would lead to the disastrous Battle of Flodden.

The town was created a Burgh of Barony in 1490 by James IV heritably for John and George Hume of Ayton, and the townsfolk were given the right to hold a market every Wednesday, and to hold a week-long annual fair between Pentecost and Trinity Sunday.[6] Duns suffered badly in cross-border raiding and feuding, and was burned to the ground three times within 14 years, in 1544, 1545 and 1558 during the war of the Rough Wooing.

By 1588 the town had relocated from the ruin at the top of Duns Law to its present location at its foot.[7] The burgh's original location has since been known as the Bruntons (a corruption of Burnt-town).[8]

In the autumn of 1517, Duns Market Cross was also the destination of the head of the Sieur de la Bastie, the French Ambassador and Warden of the Eastern March, following his murder at Preston, by Home of Wedderburn.

In 1630 Duns was home to a Margaret Lumsden, who was supposedly the victim of demonic possession. She was brought to Edinburgh to be investigated by John Maitland, 1st Earl of Lauderdale and the Privy Council of Scotland, and arrangements were made to have her and her immediate family lodged in the Canongate Tolbooth.[10][11] Lauderdale's son John Maitland, 1st Duke of Lauderdale recounted the story in a letter to Richard Baxter which he published in his work, The certainty of the World of Spirits. Margaret Lumsden was said to be a poor uneducated woman, yet when spoken to in Latin by the local minister, John Weemes, she is said to have replied in better Latin than he had himself.[12]

In 1639 during the First Bishops' War, Duns became the mustering point for the Covenanting army led by General Leslie, gathered there to face King Charles I's English host encamped at Berwick. Leslie took up residence in the Castle and ordered a redoubt to be constructed on Duns Law. The opposing armies did not engage but on 18 June the Pacification of Berwick was signed. The remains of Leslie's fortifications are still evident on top of Duns Law.[13]

Oliver Cromwell put a garrison into the town after the Battle of Dunbar on 3 September 1650.

By 1670 the town and the estate were bought by Sir John Cockburn of Cockburn from the Homes of Ayton, who had a regrant of the Burgh charter.[14] The estate was then sold in 1696 to John Hay, 1st Marquess of Tweeddale who granted to his son the Lord William Hay following his marriage to Elizabeth Seton, a daughter of Alexander Seton, 1st Viscount of Kingston.

In the peace following the end of the Jacobite rebellion in 1746, Duns began to expand and many of the administrative functions of Berwickshire were carried out in the town. In 1903, a bill first introduced by the Secretary for Scotland in 1900 was passed confirming Duns as the county town of Berwickshire when nearby Greenlaw lost that status the following year.

Within living memory, Duns had a Tolbooth or town hall on its Market Square. This was used for the administration of the burgh and for dealing with malefactors: the first such structure was built in 1328, presumably in the old town at Duns Law; the second was built following Cockburn's rechartering of the burgh in 1680. The 1680 building was badly damaged by fire in 1795, and was replaced by a third building designed by the architect James Gillespie Graham in 1816.[15] The structure was demolished in 1966.

File:Duns garden.jpg
Gone forever: part of the last mediaeval gardens in the heart of Duns, at 5 - 7 South Street, bought by the British Red Cross in June 1994 and completely developed for housing.

Duns has the largest shopping facilities in a radius of 15 miles (24 km) and until 28 January 2015 housed the Berwickshire Sheriff Court, it no longer has any principal offices of the Scottish Borders Council, but merely retains a Registry Office.

Since the early 1990s Duns and its immediate vicinity have seen substantial housing development, some controversial. A development near the golf club on the road to Longformacus just outside Duns is one such example, as it was built upon greenfield sites.

Opposite the old Berwickshire High School a new modern High School has been constructed to replace the mid-1950s buildings in which the school was previously housed. The new High School opened in February 2009.

The Hay family were responsible for the present Gothic Revival structure; prior to that, it had been a substantial Peel tower built in 1320 by the Earl of Moray who had been granted the estate by Robert I.

The surrounding area once had a considerable number of notable country houses. Those surviving include: 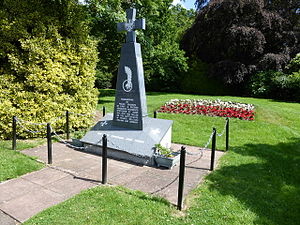 During the Second World War, the Scottish Borders was home to many Polish soldiers, who had come here to form new regiments prior to returning south to go the front in Europe. Duns, and the surrounding area, was home to the First and Second Armoured Regiments of the Polish Army, who learned and practised their armoured warfare skills on the moors of Berwickshire. It was as a tribute to the 127 men of these regiments who died in the conflict, that Polish ex-soldiers and the people of Duns, jointly, paid for the erection of this monument. It was unveiled in 1981 by their former Commanding Officer, General Maczek.[16]

Duns historically was connected to the mainline railway network by the Berwickshire Railway but that closed to passengers on 10 September 1951, and to goods traffic during the Beeching closures on 7 November 1966.

Duns has a primary school, currently located near the town centre in a Victorian building. It is expected to move to refurbished premises in the old Berwickshire High School in 2016. The new Berwickshire High School is located to the west of the town on the A6015 and provides higher education not only for pupils from Duns but also the many surrounding villages and wider rural community. Borders College also have a small campus in the town.

The Ba game of Duns

This is a kind of medieval football. Three balls or "Ba"s were required for this game; the first was gold, the second silvered, and the third coloured or spotted. A fourth was provided in case of mishap, and if not needed was presented to the subscriber whose entertainment had been most hospitable, the Hay family at Duns Castle usually being the recipients.

At mid-day the honour of throwing up the ball would be auctioned in the Kirkyard. The throw would invariably be performed by a member of the Duns Castle family. At 1 o'clock the game began, the Ba being thrown up in the Market Square. The goal for the married men was the pulpit of the church; if a goal was scored then the church bell would rung by the victors. The goal of the bachelors was the hopper of any of the grinding mills in the district, the nearest being over a mile (1500 m) away. If a bachelor won the Ba he would be dusted with flour and receive a meal of pork and dumplings from the miller.[17]

The game was revived in 1949 as part of the Duns Summer Festival. The goals are now at opposite corners of the Market Square, by the White Swan hotel and the old Post Office.

The game of Hand Ba' takes place at various places throughout the Scottish Borders. Duns, Jedburgh, Denholm, Hobkirk and it is known to take place as far afield as the Orkney Islands - there is a documentary archived of such an event.