The Duquesne Club is a private social club in Pittsburgh, Pennsylvania, founded in 1873. 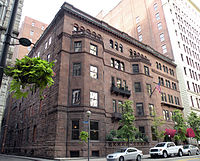 The Duquesne Club was founded in 1873. Its first president was John H. Ricketson.[2] The club's present home, a Romanesque structure designed by Longfellow, Alden & Harlow on Sixth Avenue in downtown Pittsburgh, was opened in 1890; an addition designed by Janssen & Cocken that included a garden patio, barbershop, and new kitchens was constructed in 1931.[2] The building achieved landmark status from the Pittsburgh History and Landmarks Foundation in 1976, and was added to the National Register of Historic Places in 1995.[2]

In 2009, the Duquesne Club was ranked as the second best city club in the nation, behind the Union League Club of Philadelphia.[4]

As of 2007, membership at the Duquesne Club consisted of about 2,700 men and women.[8] Though the Club does not discriminate in its selection of members, membership is by invitation from an existing member only.[8]