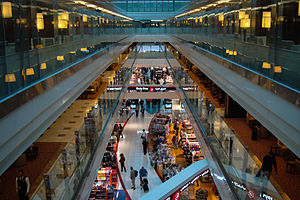 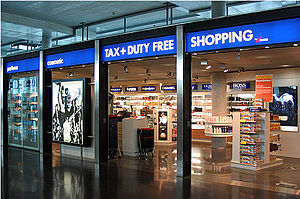 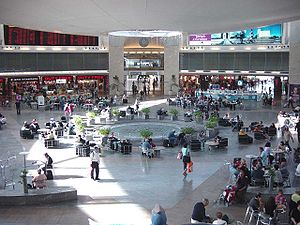 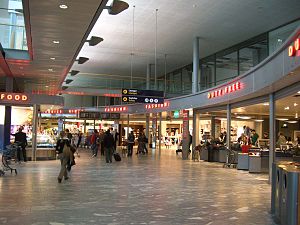 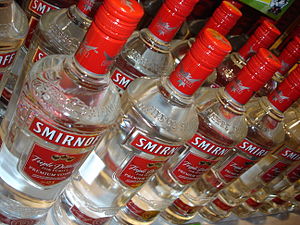 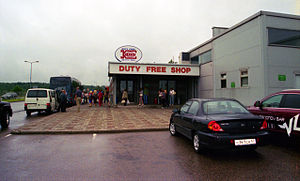 Duty-free shops (or stores) are retail outlets that are exempt from the payment of certain local or national taxes and duties, on the requirement that the goods sold will be sold to travelers who will take them out of the country. Which products can be sold duty-free vary by jurisdiction, as well as how they can be sold, and the process of calculating the duty or refund the duty component.

However, some countries impose duty on goods brought into the country, though they had been bought duty-free in another country, or when the value or quantity of such goods exceed an allowed limit. Duty-free shops are often found in the international zone of international airports, sea ports, and train stations but goods can be also bought duty-free on board airplanes and passenger ships. They are not as commonly available for road or train travelers, although several border crossings between the United States and both Canada and Mexico have duty-free shops for car travelers. In some countries, any shop can participate in a reimbursement system, such as Global Blue and Premier Tax Free where a sum equivalent to the tax is paid, but then the goods are presented to the customs and the sum reimbursed on exit.

These outlets were abolished for intra-EU travellers in 1999, but are retained for travelers whose final destination is outside the EU. They also sell to intra-EU travelers but with appropriate taxes. Some special member state territories such as Åland, Livigno and the Canary Islands, are within the EU but outside the EU tax union, and thus still continue duty-free sales for all travelers.

Tax Free World Association (TFWA) announced that in 2011 Asia-Pacific, with 35 percent of global duty-free and travel retail sales, beat Europe and Americas, with these regions accounting for 34 percent and 23 percent respectively. 31 percent of sales came from the fragrances and cosmetics category, followed by the wine and spirit category with 17 percent and then comes tobacco products.[1]

The world's largest airport duty free by sales is Dubai Duty Free which, with $1.53 billion in sales in the 10 months to October 2014, accounts for over 5% of global duty-free sales.[2]

The world's first duty-free shop was established at Shannon Airport in Ireland by Brendan O'Regan in 1947[3] and is in service to this date. Designed to provide a service for Trans-Atlantic airline passengers typically travelling between Europe and North America whose flights stopped for refuelling on both outbound and inbound legs of their journeys, it was an immediate success and has been copied worldwide. Duty-free shopping was in its infancy when two American entrepreneurs, Charles Feeney and Robert Warren Miller, created what is now Duty Free Shoppers (DFS) on 7 November 1960. DFS started operations in Hong Kong and spread to Europe and other places around the globe. Securing the exclusive concession for duty-free sales in Hawaii in the early 1960s created a business breakthrough for DFS, and the company was positioned to focus on emerging Japanese travelers. DFS continued to innovate, expanding into off-airport duty-free stores and large downtown Galleria stores and grew to become the world’s largest travel retailer. In 1996, LVMH Möet Hennessy Louis Vuitton acquired the interests of Feeney and two other shareholders and today jointly owns DFS with Miller.

In this same period, several locales grew as duty-free shopping destinations. They are exemplified by Saint Martin and the U.S. Virgin Islands in the Caribbean, Hong Kong and Singapore. Still others claim prices competitive to duty-free. Generally, goods are free of duty and tax levied on imports for sale anywhere in the shopping destination. Merchants may pay inventory/business or other taxes, but their customers usually pay none directly.

The mere absence of duty or other taxes on goods being sold does not assure that they are bargains. Costs of identical goods from different duty-free sources can vary widely. They often depend on the presence or absence of nearby competition, e.g., airport stores, especially if all at any airport are owned by a single firm such as Dufry.[4] Also, prices can often be driven upward by the costs of buyer convenience, e.g., in-flight sales by airlines. Many airlines, such as Emirates,[5] El Al,[6] Singapore Airlines,[7] Middle East Airlines,[8] Ukraine International Airlines,[9] Delta,[10] and Avianca,[11] offer duty-free sales on their flights.

Duty-free shopping away from ports

Some duty-free shops operate in central business districts away from airports or other ports. In Japan, for example, any visitor whose passport indicates that they have been in the country for less than six months can buy duty-free items. Duty-free shops are also a mainstay in the Akihabara electronic shopping district of Tokyo.

In Thailand, the King Power chain has shops where duty-free items are pre-purchased and delivered separately to the airport to be picked up on departure. For certain other purchases, a VAT refund may be claimed at the airport upon departure.[12]

In the Philippines, there is one shopping mall called the Duty Free Philippines Fiestamall, which is located a few miles away from Ninoy Aquino Airport as opposed to being at the airport itself. It is the only shopping mall of its kind in the world. The goods that are sold in this mall are often imported products which come from around the world (mainly from USA, Asia and Australasia) and are not found in any other shopping malls in the country, aside from duty-free malls. Tourists, visitors and returning citizens of Philippines often pay a visit to this mall shortly after their arrival (since only arriving passengers and their companions are allowed access).[13] In order to gain entry, a passport is needed to be presented and registered at the Customer Registration Counter at the entrance of the mall. The customer will then be issued a shopping card; these shopping cards must be presented to the cashier for validation of purchases. Arriving customers are given a certain tax-free allowance on purchases and anything in excess will be subject to local and national taxes. In the past, the mall used to only accept US dollars and Philippine peso but in recent years, it had begun accepting other currencies such as Japanese yen, Brunei dollar, Australian dollar, British pound, Canadian dollar, Swiss franc, Saudi riyal, Bahraini dinar, and Thai baht. Currency exchange booths are also available inside the mall if a customer wishes to exchange currencies into Philippine pesos or US dollars. Credits cards can also be used for purchasing goods.[14]

In Australia, duty-free shops, once common, have all but disappeared since the introduction of GST in 2000. Retailer James Richardson operates several duty-free shops in major cities,[15] but most duty-free shops are now located within international airports. Residents and tourists are allowed to purchase virtually any physical good within 60 days of departure,[16] which needs to be taken on the outward flight, and claim the GST component back through the Tourist Refund Scheme when passing through customs. Consumers are now free to fully use their items prior to departure. This is in contrast prior to 2000, where all purchases had to be packed by the duty-free store in a sealed clear plastic bag, and could only be broken open by customs staff just prior to departure.[17]

Duty-free outside the ports in the EU

Any traveller living in a country outside the EU VAT area is entitled to shop tax-free at participating shops in the EU. The traveller pays the VAT on goods in the shop in the usual way, and can request a refund when exporting the goods. To qualify, the traveller must:

Only goods meant for personal use are eligible for the refund. The stamped forms and receipts can then be sent back to the retailers, or their agents, for a refund.

In most cases, a minimum purchase applies to use the tax-free shopping scheme. The actual amount of VAT reclaimable depends on the VAT rate applicable in the particular country to the goods purchased, and may be subject to a deduction for administration fees.

Travelers on long-haul routes with at least one transit stop between their departure airport and destination airport should be careful to purchase their duty-free alcohol or perfume at the last transit port, as otherwise they may have it confiscated by security when they board at the transit port, as they will be exceeding the current limit on liquids in hand baggage. This does not apply to passengers transferring within the EU and Singapore on the same day, as long as the liquid item is sealed in a plastic bag with the receipt showing in the bag. Arrivals duty-free shops are now becoming more common. Most of South and Central America, and the Caribbean have such shops, as does SE Asia and Oceania. Switzerland and Canada are looking to introduce them in 2010, this method of retail removes any security problems for the transit of liquids as they are not carried on aircraft.[18]

Several airlines do not allow sales of certain sharp objects in-flight due to security risk. Other objects that have sharp parts, such as model airplanes, may be bought in-flight but received at the passengers' home address for the same reason.

Some countries, including Australia, Argentina, Brazil, Chile, China, Iceland, India, Jamaica, Kenya, Lebanon, Malaysia, New Zealand, Norway, Panama, the Philippines, Sri Lanka, Switzerland, the United Arab Emirates, Uzbekistan, Taiwan and Turkey have inwards duty-free facilities, where arriving passengers can purchase duty-free items immediately before going through customs. This not only saves the inconvenience of having to carry these items around the world but also solves the security problem mentioned above. Other countries such as Canada and Sweden have been considering duty-free on arrival. The European Union does not permit arrivals duty-free stores; some EU airports sell goods on arrival in the baggage claim area described as "Tax-Free", but these goods are all tax-paid sales, the local sales tax is discounted. Normally, discounted liquors or tobacco products cannot be bought when arriving into an EU Member State as there is often a high local Excise Duty on these goods as well as the local sales tax (VAT/IVA/TVA) which is included in the price. In some EU Territories the tax on tobaccos and liquors is lower than in other EU countries, which is why the prices still seem competitive and look like duty-free prices. A good example is the difference in tobacco prices between the UK and Ireland, compared to Spain or Portugal.

Such exemption also applies to goods supplied for use on ships and aircraft, because they are consumed outside the country. Businesses supplying such goods can do so tax- and duty-free.

Goods sold to passengers on board ships or aircraft are tax free. The passenger can either consume them on board, or import them tax-free into the country they are traveling to, so long as they are within the traveler's duty-free allowance. Most tax regimes also allow travelers entering a country to bring in a certain amount of goods for personal use without paying tax on them, the so-called "duty-free allowance"; because it is not economically justifiable to collect the small amounts of tax involved, and would be an inconvenience to the passengers.

A duty-free shop works under the same system. The goods must be exported intact (they cannot be consumed in the airport), and they are importing into the destination country under that country's own tax rules. In some countries, in order to ensure that goods are exported intact, they are hand-delivered in a closed bag to the passenger at the gate after his ticket is scanned. In the United States, duty-free shops are technically considered class 9 Bonded Warehouses with regard to the U.S. Customs & Border Protection:

Moreover, in the U.S. some duty-free stores will sell their goods to domestic passengers with appropriate taxes included. Alcohol and tobacco products are restricted to international passengers only and subject to the age limitations of 21 and 18 respectively, even though the age one must be to import those items into other countries may be lower.

See U.S. Customs and Border Protection Regulations for International Travel by U.S. Residents ("Know Before You Go") for precise details.