In tort law, a duty of care is a legal obligation which is imposed on an individual requiring adherence to a standard of reasonable care while performing any acts that could foreseeably harm others. It is the first element that must be established to proceed with an action in negligence. The claimant must be able to show a duty of care imposed by law which the defendant has breached. In turn, breaching a duty may subject an individual to liability. The duty of care may be imposed by operation of law between individuals with no current direct relationship (familial or contractual or otherwise), but eventually become related in some manner, as defined by common law (meaning case law).

Duty of care may be considered a formalisation of the social contract, the implicit responsibilities held by individuals towards others within society. It is not a requirement that a duty of care be defined by law, though it will often develop through the jurisprudence of common law.

Development of the general duty of care

At common law, duties were formerly limited to those with whom one was in privity one way or another, as exemplified by cases like Winterbottom v. Wright (1842). In the early 20th century, judges began to recognize that the cold realities of the Second Industrial Revolution (in which end users were frequently several parties removed from the original manufacturer) implied that enforcing the privity requirement against hapless consumers had harsh results in many product liability cases. The idea of a general duty of care that runs to all who could be foreseeably affected by one's conduct (accompanied by the demolishing of the privity barrier) first appeared in the judgment of Brett MR (later Lord Esher) in Heaven v Pender (1883). Although Brett J's formulation was rejected by the rest of the court, similar formulations later appeared in the landmark U.S. case of MacPherson v. Buick Motor Co. (1916) and, in the UK, in Donoghue v Stevenson (1932). Both MacPherson and Donoghue were product liability cases, and both expressly acknowledged and cited Brett's analysis as their inspiration.

Although the duty of care is easiest to understand in contexts like simple blunt trauma, it is important to understand that a duty can be still found in situations where plaintiffs and defendants may be separated by vast distances of space and time.

For instance, an engineer or construction company involved in erecting a building may be reasonably responsible to tenants inhabiting the building many years in the future. This point is illustrated by the decision of the South Carolina Supreme Court in Terlinde v. Neely 275 S.C. 395, 271 S.E.2d 768 (1980), later cited by the Supreme Court of Canada in Winnipeg Condominium Corporation No. 36 v. Bird Construction Co. [1995] 1 S.C.R. 85:

Although the idea of a general duty of care is now widely accepted, there are significant differences among the common law jurisdictions concerning the specific circumstances under which that duty of care exists. Obviously, courts cannot impose unlimited liability and hold everyone liable for everyone else's problems; as Justice Cardozo put it, to rule otherwise would be to expose defendants "to a liability in an indeterminate amount for an indeterminate time to an indeterminate class."[1] There must be some reasonable limit to the duty of care; the problem is where to set that limit.

The leading judicial test for a duty of care in England was found in the judgments of Caparo Industries plc v Dickman,[2] in which the House of Lords set out the following three-part test:

Because each of the 50 U.S. states is a separate sovereign free to develop its own tort law under the Tenth Amendment, there are several tests for finding a duty of care in United States tort law.

In several states, like Florida and Massachusetts, the only test is whether the harm to the plaintiff from the defendant's actions was foreseeable.[6][7]

The Supreme Court of California, in a famous majority opinion by Justice David Eagleson, sharply criticized the idea that foreseeability, standing alone, constitutes an adequate basis on which to rest the duty of care: "Experience has shown that . . . there are clear judicial days on which a court can foresee forever and thus determine liability but none on which that foresight alone provides a socially and judicially acceptable limit on recovery of damages."[8]

Drawing upon the work of scholars such as Fowler V. Harper, Fleming James Jr., and William Prosser, California has developed a complex balancing test consisting of multiple factors which must be carefully weighed against one another to determine whether a duty of care exists in a negligence action.

California Civil Code section 1714 imposes a general duty of ordinary care, which by default requires all persons to take reasonable measures to prevent harm to others.[9] In the 1968 case of Rowland v. Christian, the court held that judicial exceptions to this general duty of care should only be created if clearly justified based on the following public-policy factors:

In California, the duty inquiry focuses on the general category of conduct at issue and the range of foreseeable harm it creates, rather than the specific actions or injuries in each case.[13] Appellate lawyer Jeffrey Ehrlich persuaded the California Supreme Court to clarify the central importance of this distinction with its 2011 decision in Cabral v. Ralphs Grocery Co. which requires "no duty" rulings to be based on categorical public-policy rules that can be applied to a range of cases, without reference to detailed facts.[14] By requiring courts to apply the Rowland factors at this high level of factual generality, the Cabral decision preserved the role of juries in determining whether the defendant breached its duty of care based on the unique circumstances of each case.[9]

After the Rowland decision, the "overwhelming majority" of states eventually chose to follow California's lead and adopted some kind of multi-factor analysis based on the work of Prosser and others.[15] Some states simply copied California's factors but modified them, like Michigan (which deleted the insurance factor and never picked up the social utility factor),[16] while others developed different lists of factors, such as this one from Tennessee:

A 2011 law review article identified 43 states that use a multifactor analysis in 23 various incarnations; consolidating them together results in a list of 42 different factors used by U.S. courts to determine whether a duty of care exists.[18]

The Tennessee Court of Appeal has also recently followed the California Supreme Court's lead by citing Cabral for the proposition that duty determinations must be made at the highest level of factual generality.[19]

Once a duty exists, the plaintiff must show that the defendant breached it. This is generally treated as the second element of negligence in the United States. Breach involves testing the defendant's actions against the standard of a reasonable person, which varies depending on the facts of the case. For example, physicians will be held to reasonable standards for members of their profession, rather than those of the general public, in negligence actions for medical malpractice.

In turn, once the appropriate standard has been found, the breach is proven when the plaintiff shows that the defendant's conduct fell below or did not reach the relevant standard of reasonable care.[20]

Product liability was the context in which the general duty of care first developed. Manufacturers owe a duty of care to consumers who ultimately purchase and use the products. In the case of Donoghue v Stevenson [1932] AC 562 of the House of Lords, Lord Atkin stated: 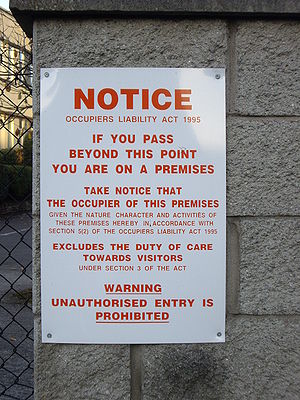 At common law, in the case of landowners, the extent of their duty of care to those who came on their premises varied depending on whether a person was classified as a trespasser, licensee, or invitee. This rule was eventually abolished in some common law jurisdictions. For example, England enacted the Occupiers Liability Act 1957. Similarly, in the 1968 landmark case of Rowland v. Christian,[10] the Supreme Court of California replaced the old classifications with a general duty of care to all persons on one's land, regardless of their status. After several highly publicized and controversial cases, the California Legislature enacted a statute in 1985 that partially restored immunity to landowners from some types of lawsuits from trespassers.[23]

Colorado's highest court adopted the Rowland unified duty of care analysis in 1971. The resulting explosion of lawsuits against Colorado landowners caused the state legislature to enact the Colorado Premises Liability Act in 1986, which enacted a cleaned-up statutory version of the common law classifications and simultaneously expressly displaced all common law remedies against landowners in order to prevent state courts from again expanding their liability.

In the Republic of Ireland, under the Occupiers' Liability Act, 1995, the duty of care to trespassers, visitors and "recreational users" can be restricted by the occupier; provided reasonable notice is given, for which a prominent notice at the usual entrance to the premises usually suffices.[24]

In business, "the duty of care addresses the attentiveness and prudence of managers in performing their decision-making and supervisory functions."[25] The "business judgment rule presumes that directors (and officers) carry out their functions in good faith, after sufficient investigation, and for acceptable reasons. Unless this presumption is overcome, courts abstain from second-guessing well-meaning business decisions even when they are flops. This is a risk that shareholders take when they make a corporate investment."[25]