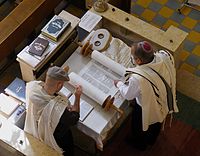 Reading of the Torah

Torah study is the study of the Torah, Hebrew Bible, Talmud, responsa, rabbinic literature and similar works, all of which are Judaism's religious texts. According to Rabbinic beliefs the study is ideally done for the purpose of the mitzvah ("commandment") of Torah study itself.

This practice is present to an extent in all religious branches of Judaism and is considered of paramount importance among religious Jews. Torah study has evolved over the generations, as lifestyles changed and also as new texts were written.

In rabbinic literature, the highest ideal of all Jewish men is Torah study, women being exempt from Torah study.[1] This literature teaches an eagerness for such study and a thirst for knowledge that expands beyond the text of the Tanakh to the entire Oral Torah.[2] Some examples of traditional religious teachings:

Torah study is counted amongst the 613 mitzvot ("[Biblical] commandments"), finding its source in the verse (Deuteronomy 6:7): "And you shall teach it to your children," upon which the Talmud comments that "Study is necessary in order to teach." The importance of study is attested to in another Talmudic discussion (Kiddushin 40b) about which is preferred: study or action. The answer there, a seeming compromise, is "study that leads to action." Although the word "Torah" refers specifically to the Five Books of Moses, in Judaism the word also refers to the Tanakh (Hebrew Bible), the Talmud and other religious works, even including the study of Kabbalah, Hasidism, Mussar and much more.

The Talmud (Tractate Kiddushin 30a) defines the objective of Torah study: "That the words of Torah shall be clear in your mouth so that if someone asks you something, you shall need not hesitate and then tell it to him, rather you shall tell it to him immediately." In yeshivas ("Talmudical schools"), rabbinical schools and kollels ("[post-graduate] Talmudical schools") the primary ways of studying Torah include study of:

Other less universally studied texts include the Nevi'im and Ketuvim, other rabbinic literature (such as midrash) and works of religious Jewish philosophy.

Orthodox Jews can study the text of the Torah on any of four levels as described in the Zohar:

The initial letters of the words Peshat, Remez, Derash, Sod, forming together the Hebrew word PaRDeS (also meaning "orchard"), became the designation for the four-way method of studying Torah, in which the mystical sense given in the Kabbalah was the highest point.

In some traditional circles, most notably the Orthodox and Haredi, Torah study is a way of life for males. Women do not study Torah, but gain merit for facilitating Torah study for the men. In some communities, men forgo other occupations and study Torah full-time.

Apart from full-time Torah study as engaged in at schools and yeshivot or for the purpose of rabbinic training, there is also held to be an obligation on individuals to set aside a regular study period to review their knowledge. Examples of programmes of study are as follows.

A D'var Torah (Heb: דבר תורה) (Plural: Divrei Torah), also known as a Drasha in Ashkenazic communities, is a talk on topics relating to a section (parashah) of the Torah – typically the weekly Torah portion. In respect to its place in synagogues, rabbis will often give their D'var Torah after the Torah service. Divrei Torah can range in length, depending on the rabbi and the depth of the talk. In most congregations, it will not last much longer than fifteen minutes, but in the case of Rebbes or special occasions, a Dvar Torah can last all afternoon. It is extremely likely that a D'var Torah will carry a life lesson, backed up by passages from certain Jewish texts like the Talmud or Mishnah.

The homily in Christian liturgical traditions bears many similarities to the tradition of D'var Torah.

Like Orthodox Jews, other Jewish denominations may use any or all of the traditional areas and modes of Torah study. They study the Parsha, the Talmud, ethical works, and more. They may study simply the peshat of the text, or they may also study, to a limited extent, the remez, derash and sod, which is found in Etz Hayyim: A Torah Commentary (Rabbinical Assembly), used in many Conservative congregations. It is common in Torah study among Jews involved in Jewish Renewal. Some level of PaRDeS study can even be found in forms of Judaism that otherwise are strictly rationalist, such as Reconstructionist Judaism. However, non-Orthodox Jews generally spend less time in detailed study of the classical Torah commentators, and spend more time studying modern Torah commentaries that draw on and include the classical commentators, but which are written from more modern perspectives. Furthermore, works of rabbinic literature (such as the Talmud) typically receive less attention than the Tanakh.

Before the Enlightenment, virtually all Jews believed that the Torah was dictated to Moses by God.[13][better source needed] They also believed that as many parts of the Torah, specifically the laws and commandments, are written in unspecific terms, Moses also received an interpretation of the Torah that was transmitted through the generations in oral form till it was finally put in writing in the Mishnah and later, in greater detail, the Talmud.[14] After the Enlightenment, many Jews began to participate in wider European society, where they engaged in study related to critical methods of textual analysis, including both lower and higher criticism, the modern historical method, hermeneutics, and fields relevant to Bible study such as near-Eastern archaeology and linguistics. In time the documentary hypothesis emerged from these studies. Formulated primarily by non Jews,[citation needed] the documentary hypothesis holds that the Torah was not written by Moses, but was simply written by different people who lived during different periods of Israelite history. Some Jews adapted the findings of these disciplines. Consequently, biblical study primarily focused on the intentions of these people, and the circumstances in which they lived. This type of study depends on evidence external to the text, especially archeological evidence and comparative literature.

Today, Reform, Conservative, and Reconstructionist rabbis draw on the lessons of modern critical Bible scholarship as well as the traditional forms of Biblical exegesis. Orthodox, Sephardim, a majority of Israeli Jews[15] and other Jews, including many whom are not observant, reject critical Bible scholarship and the documentary hypothesis, holding to the opinion that it is contradicted by the Torah in Deuteronomy 31:24,25 and 26, and the Talmud (Gittin 60a, Bava Basra 15b), which state that Moses wrote the Torah, as well as by the Mishnah,[16] which asserts the divine origin of the Torah as one of the essential tenets of Judaism.

Humanistic Jews value the Torah as a historical, political, and sociological text written by their ancestors. They do not believe 'that every word of the Torah is true, or even morally correct, just because the Torah is old.' The Torah is both disagreed with and questioned. Humanistic Jews believe that the entire Jewish experience, and not only the Torah, should be studied as a source for Jewish behavior and ethical values.[17]

The recommended way to study the Torah is by reading the original text written in Hebrew. This allows the reader to understand language-specific information. For example, the Hebrew word for earth is 'adama' and the name of the first man is 'Adam' meaning 'of the earth'. Jewish denominations vary in the importance placed on the usage of the original Hebrew text. Most denominations strongly recommend it, but also allow studying the Torah in other languages, and using Rashi and other commentary to learn language-specific information.

According to Ruth Calderon, there are currently almost one hundred non-halakhic Torah study centers in Israel. Whilst influenced by methods used in the yeshiva and in the university, non religious Torah study includes the use of new tools that are not part of the accepted hermeneutic tradition of the exegetic literature. These include Feminist, and post-modernist criticism, historic, sociological and psychological analyses, and literary analysis.[18] Among these institutions is the Alma Centre for Hebrew Studies in Tel Aviv.[19]

Devoting a year to Torah study in the modern Land of Israel is a common practice among American, and, to a lesser extent, European, South African, South American, and Australian Modern Orthodox Jews. Young adults spend a year studying Torah in the Land of Israel. It is common both among males and females, with the boys normally going to a yeshiva and the girls to a midrasha (often called seminary or seminaria). Common Yeshivot with year-in-Israel programs include: Mir yeshiva (Jerusalem), Yeshivat Sha'alvim Yeshivat Kerem B'Yavneh Yeshivat Har Etzion, Yeshivat HaMivtar, Machon Meir, Dvar Yerushalayim, Aish HaTorah and Ohr Somayach, Jerusalem. Common seminaries or midrashot include: Midreshet HaRova Midreshet Lindenbaum, Migdal Oz, Nishmat, Bnos Chava, Michlalah [3], Neve Yerushalayim and many many others. Chasidic and Charedi boys from abroad often spend many years studying in the Land of Israel. Bnei Akiva offers a number of options to spend a year of study in Israel, as part of their Hachshara programs.